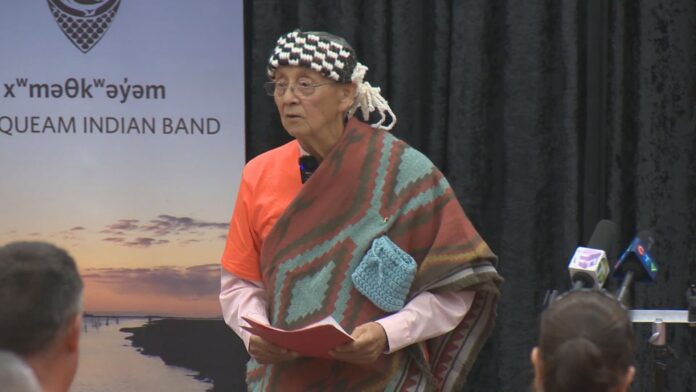 Vancouver’s Musqueam First Nation hosted an emotional public ceremony on National Day for Truth and Reconciliation to unveil the new moniker that will soon replace a painful sign of the past.

“Trutch is the culmination of all the issues that bring forward Truth and Reconciliation Day,” said Musqueam elder Larry Grant.

Trutch Street, named after B.C.’s first Lieutenant Governor Joseph Trutch, runs between 18th and 1st Avenues on the city’s west side in the unceded traditional territories of the Musqueam people.

Trutch, who arrived in the province in 1859 and became BC’s chief commissioner of land and works in the 1860s, was considered an extreme racist.

According to the Musqueam Indian Band, Trutch was openly hostile to First Nations, denied the existence of Aboriginal rights, and did not recognize previously established Indian Reserves – resulting in reserves shrinking throughout the province.

Grant said Trutch’s name is associated with the trauma inflicted by colonial governments and residential schools.

“Some of those survivors that come home do not recognize their families,” said Grant.

Grant, who manages the Musqueam’s language and culture department, was the ceremonial speaker at Friday’s event.

Four witnesses were called to observe and carry the story of the ceremony for future generations – including two Musqueam members – Alec Guerin and Johnny Louis, who opened up about his battle with alcoholism for the first time.

“I walked through hell because of what happened to us in residential school,” Louis told the audience.

“He turned to alcohol and almost killed himself trying to hide those emotions,” recalled Chief Wayne Sparrow.

Musqueam Nation: Trutch Street’s new name to be unveiled on National Day for Truth and Reconciliation

The elected chief of the Musqueam First Nation said his people had to stage an intervention to save Louis.

“We had to go to his house and take the bottle away from him and take his wallet away from him or else he wouldn’t be here with us today,” Sparrow told Global News in an interview following the renaming ceremony.

“He was one of the individuals who didn’t want to talk about residential school, and for him to stand out in front of our community and give a little bit of his story is a big step forward – and that’s what reconciliation is.”

In July 2021, Vancouver city council passed mayor Kennedy Stewart’s motion ‘Toward Reconciliation’ to rename the street because of the racist policies against Indigenous people enacted by Trutch.

“Chief Wayne Sparrow said frankly he was just sick of driving down Trutch Street to get to the reserve because Trutch has such a horrendous history in this province,” Stewart said in an interview Friday.

Grant announced the new name as Musqueamview Street in English, and šxʷməθkʷəy̓əmasəm in hən̓q̓əmin̓əm̓, the traditional language of Musqueam.

Stewart and city manager Paul Mochrie were the other two witnesses to the renaming – with the mayor acknowledging his own grandfather was a racist.

“As a descendant of colonizers, I feel deep shame,” Stewart said after the new name was gifted to the city of Vancouver.

“I hope every time everybody else travels down this street they think and they learn the name in hən̓q̓əmin̓əm̓, and then understand the depth and how long this culture has been here.”

“Words are great but when they show up in their presence, it works for all of us and it’s little baby steps – and it’s come forward.”

“It was a long time coming but it was very rewarding and uplifting for our community,” Sparrow added.

It’s unclear when the Musqueamview name will debut on the street or the cost of changing signs, addresses and land titles – but it’s expected to be a nominal expense given the Musqueam First Nation said it’s been paying the price for more than 150 years.

6:25The journey to Truth and Reconciliation