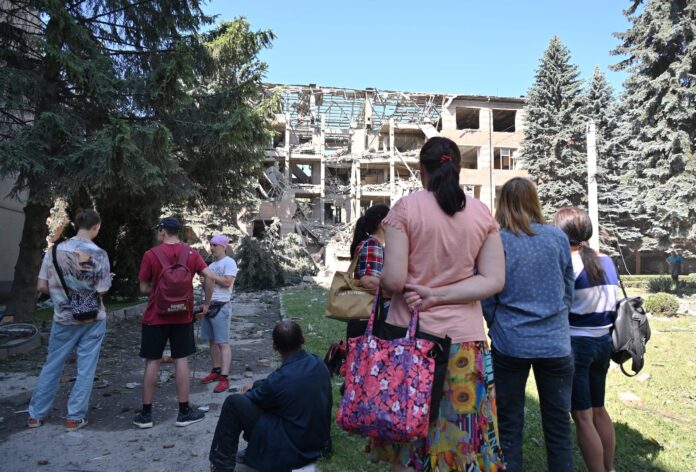 Russian forces pounded Ukraine’s second largest city Kharkiv and surrounding countryside with rockets, killing at least 15 people, in what Kyiv called a bid to force it to pull resources from the main battlefield to protect civilians from attack.

Inside Russia, a fire tore through an oil refinery just eight kilometres from the Ukrainian border. Russia’s TASS news agency quoted a local official as saying it had been struck by a drone.

The Russian strikes on Kharkiv, throughout Tuesday and continuing on Wednesday morning, were the worst for weeks in the area where normal life had been returning since Ukraine pushed Russian forces back in a major counter-offensive last month.

“It was shelling by Russian troops. It was probably multiple rocket launchers. And it’s the missile impact, it’s all the missile impact,” Kharkiv prosecutor Mikhailo Martosh told Reuters amid the ruins of cottages struck on Tuesday in a rural area on the city’s outskirts.

Medical workers carried the body of an elderly woman out of the rubble of a burnt-out garage and into a nearby van.

“She was 85 years old. A child of the war (Second World War). She survived one war, but didn’t make it through this one,” said her grandson Mykyta. “There is nowhere to flee to. Especially grandmother herself, she didn’t want to go anywhere from here.”

Ukrainian authorities said 15 people were killed and 16 wounded on Tuesday in shelling in the Kharkiv region, with reports of more casualties from strikes overnight and on Wednesday morning.

“Russian forces are now hitting the city of Kharkiv in the same way that they previously were hitting Mariupol – with the aim of terrorizing the population,” Ukrainian presidential adviser Oleksiy Arestovych said in a video address.

“And if they keep doing that we will have to react — and that is one way to make us move our artillery,” he said. “The idea is to create one big problem to distract us and force us to divert troops. I think there will be an escalation.”

Kharkiv suffered punishing Russian shelling for the first three months of the war, but had largely been spared since the Ukrainian counter-offensive more than a month ago.

The main battlefield is now to the south in the Donbas region, which Moscow has been trying to seize on behalf of its separatist proxies.

Ukrainian forces in the Donbas have largely been withstanding the Russian assault so far, with Moscow making only slow progress despite deploying overwhelming artillery in some of the heaviest ground fighting in Europe since the Second World War.

There was no immediate Ukrainian comment about the blaze that tore through Russia’s Novoshakhtinsk oil refinery, located on the Russian side of the frontier with Donbas territory controlled by pro-Russian separatists.

Video footage posted on social media appeared to show a drone flying towards the refinery, before a large ball of flame and black smoke billowed up into the summer sky. The local emergency service, cited by Interfax, said no one was hurt and the blaze was put out.

Ukraine generally does not comment on reports of attacks on Russian infrastructure near the border. In the past it has called such incidents “karma” for Russian attacks on Ukraine.

Ukraine on track for EU candidacy at summit, members say

Wednesday is marked in both Russia and Ukraine as the “Day of Remembrance and Sorrow,” anniversary of the day when Hitler’s Germany attacked the Soviet Union. An estimated 27 million Soviet citizens died in the Second World War.

In Russia, President Vladimir Putin was expected to lay flowers at a memorial flame for the dead. The Second World War plays a prominent role in Russian propaganda over the Ukraine invasion, which Putin calls a “special operation” to root out “Nazis.”

Kyiv and the West view that as a baseless justification for a war to restore Moscow’s rule over its neighbour and wipe out Ukraine’s identity as a separate nation.

“Bombed at 4:30 am. Banned the word ‘war’. Blamed other countries for aggression. Psychiatrists of the future will examine: how after building the WWII cult for years, Russia began to recreate bloody pages of the history and Nazis’ each step,” Ukrainian presidential adviser Mykhailo Podolyak tweeted.