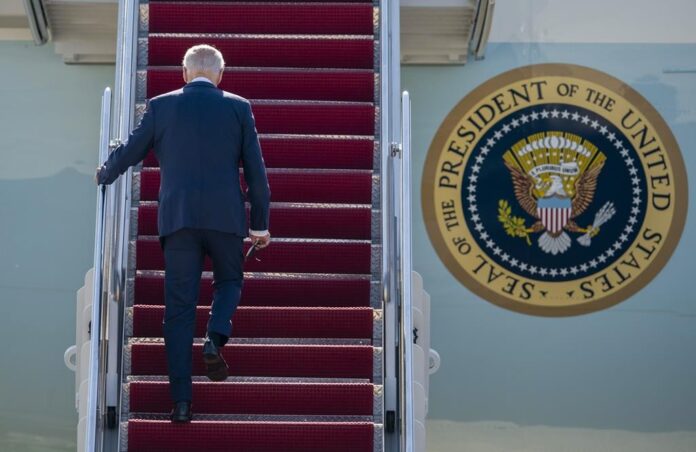 President Joe Biden is out to sustain the global alliance punishing Russia for its invasion of Ukraine as he embarks on a five-day trip to Europe as the 4-month-old war shows no sign of abating and its aftershocks to global food and energy supplies are deepening.

Biden first joins a meeting of the Group of Seven leading economic powers in the Bavarian Alps of Germany and later travels to Madrid for a summit with leaders of the 30 NATO countries. The visit comes as the global coalition to bolster Ukraine and punish Russia for its aggression has showed signs of fraying amid skyrocketing inflation in food and energy prices caused by the conflict.

Biden, who arrived in Germany on Saturday, and the G-7 leaders intend to announce a ban on importing gold from Russia, according to a person familiar with White House planning who was not authorized to discuss the matter publicly. Gold is Moscow’s second largest export after energy.

The Ukraine war has entered a more attritional phase since Biden’s last trip to Europe in March, just weeks after Russia launched its assault. At that time, he met with allies in Brussels as Ukraine was under regular bombardment and he tried to reassure Eastern Europe partners in Poland that they would not be the next to face an incursion by Moscow.

Russian’s subsequent retreat from western Ukraine and regrouping in the east has shifted the conflict to one of artillery battles and bloody house-to-house fighting in the country’s industrial heartland, the Donbas region.

While U.S. officials see broad consensus for maintaining the pressure on Russia and sustaining support for Ukraine in the near term, they view Biden’s trip as an opportunity to align strategy for both the conflict and its global ramifications heading into the winter and beyond.

Allies differ over whether their goals are merely to restore peace or to force Russia to pay a deeper price for the conflict to prevent its repetition.

John Kirby, spokesman for the White House National Security Council, said the summit will address problems such as inflation and other “challenges in the global economy as a result of Mr. Putin’s war – but also how to continue to hold Mr. Putin accountable” and subject to “constant consequences.”

Ukraine’s president, Volodymyr Zelenskyy, is set to address both summits by video. The U.S. and allies have shipped his country billions of dollars in military assistance and imposed ever stricter sanctions on Russia over the invasion.

Kirby said previously that allies would be making new “commitments” during the summits to further sever Russia from the global economy. The aim is to make it more difficult for Moscow to acquire technology to rebuild the arsenal it has depleted in Ukraine and to crack down on sanctions evasion by Russia and its oligarchs.

G-7 summits have traditionally put global finance issues front and center, but amid soaring inflation in the U.S. and Europe, few concrete actions are expected.

“There are different drivers of inflation in these various economies, different things that can be used to address it,” said Josh Lipsky, director of the Atlantic Council’s GeoEconomics Center. He foresees “a lack of an ability to do something coordinated on inflation, other than really talk about the problem.”

Biden has blamed much of the rise in prices on Russia’s invasion of Ukraine, especially in the energy markets, as U.S. and allied sanctions have limited Moscow’s ability to sell its oil and gas supplies. Sustaining the Western resolve will only get more challenging as the war drags on and cost-of-living issues pose political headaches for leaders at home, U.S. and European officials said.

Finding ways to transition from Russian energy to other sources _ without setting back longstanding goals to combat climate change – is set to be a key discussion point.

“There’s no watering down of climate commitments,” Kirby said.

Russia was once a member of what was then the G-8. It was expelled in 2014 after it invaded Ukraine’s Crimean Peninsula, a move that foreshadowed the current crisis.

A top priority of Western officials heading into the summit is finding a way to get Ukraine’s vast grain harvest out onto the world market, as the United Nations and others warn of tens of millions of people being cast into hunger because of tight supplies. The most impactful changes would require an agreement from Russia to stop targeting food and food infrastructure as well as agreeing to the establishment of a sea corridor to allow exports of grain from Ukraine.

In Madrid, Biden will help promote NATO’s effort to welcome Finland and Sweden into the alliance after the Russian invasion of Ukraine led the two historically neutral democracies to seek the protection of the mutual-defense association.

Kirby declined to say on the flight whether Biden will meet with Turkey’s president, Recep Tayyip Erdo?an, who has indicated he plans to block the two countries’ accession into NATO unless he receives concessions. Adding new members requires unanimous support from existing NATO members.

U.S. officials have maintained optimism that the two countries will be welcomed into the alliance, but have played down expectations for a breakthrough in Madrid.

Biden speaks often of the world being in a generational struggle between democracies and autocracies that will set the global agenda for the coming decades. He aims to use the trip to show that Russia’s invasion of Ukraine has “firmed up” democracies on the threats from autocracies in both Moscow and Beijing.

The president is also securing a significant step by NATO to recognize China as an emerging challenge to the alliance. The formal reference of China in NATO’s new “Strategic Concept,” the first update to its guiding principles since 2010, fulfills efforts under multiple presidents to expand the alliance’s focus to China, even in the face an increasingly bellicose Russia.

In a symbolic step, NATO has invited Pacific leaders from Japan, South Korea, New Zealand and Australia to the summit. Kirby said China “will be a significant focus” for the G-7 and he cited Beijing’s “coercive economic practices.”

4:22Ukraine gets the green light to join the EU

Ukraine gets the green light to join the EU

Biden is also set to relaunch his idea for a global infrastructure investment program meant to counter China’s influence in the developing world, which he previously had called “Build Back Better World” and had introduced at the 2021 G-7 summit.