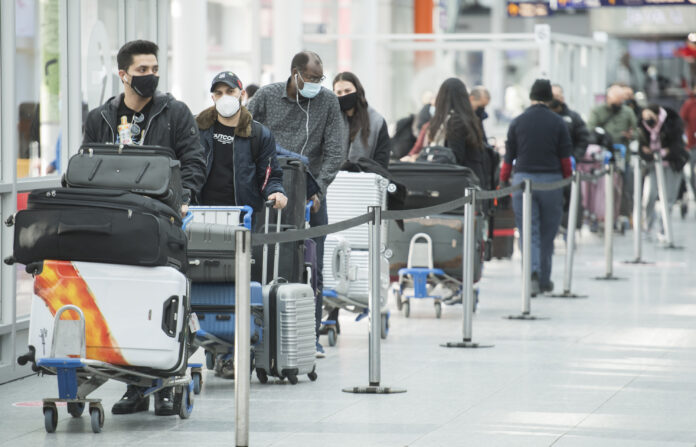 It was going to be her first vacation since the onset of the COVID-19 pandemic in March 2020.

Ishat Reza had her bags packed and was ready to enjoy time off in Portugal, but when the federal government decided to drop its mask mandate on planes and trains on Monday, doubt entered her mind.

Reza, who has a pre-existing traumatic brain injury, was expecting Ottawa to drop just its vaccine mandate and ArriveCAN, but was caught off-guard by the federal government’s decision over mandatory masking. Feeling she is at higher risk for serious COVID-19 outcomes, Reza decided it wasn’t worth the risk to fly right now and cancelled her trip just hours before takeoff.

Ottawa’s decision to ease pandemic restrictions is yet another sign individual Canadians are going to have to play a greater role in protecting themselves from COVID-19 in the future, health experts say. However, with an expected increase in infections as the cold weather sets in, Ottawa shouldn’t have dropped its mask mandate and its decision “disproportionately affects” vulnerable Canadians, Reza said.

“We now are in a position where the risk is higher to get it on a plane or on a train, and we have to decide: are we willing to take that risk? And for me, the answer to that was no, I’m not willing to take that risk at this time given how prevalent COVID is in our society,” said the Toronto woman, who added she would’ve faced a non-mask-mandated environment on her flight home next month.

“Now is not the time to be removing measures that protect us from getting a very serious illness on a plane.”

After having them in place for two years, Canada will drop its remaining COVID-19 travel restrictions come Oct. 1.

In the lead-up to Monday’s official announcement, Global News and other media reported that Ottawa had decided to scrap its vaccine requirement, and would make ArriveCAN optional. Health Minister Jean-Yves Duclos confirmed those changes on Monday, but also announced Ottawa’s mask mandate on planes and trains would also be gone at the start of next month.

5:20Masking and vaccine requirements for travellers coming to an end

Masking and vaccine requirements for travellers coming to an end

It was reported last week the Liberal government was debating whether to drop the masking requirement; masks are an effective tool in reducing COVID-19 transmission, especially indoors. Ottawa’s move follows the provinces, which have rolled back protective measures throughout the spring as the pandemic improved.

During the news conference, Duclos said federal data showed importations of COVID-19 no longer influence in a “significant way the evolution of the pandemic in Canada,” and that infections are being driven by “domestic transmission.”

Ottawa is now strongly recommending Canadians wear masks on planes and trains, and Duclos said the government would be ready to revisit restrictions if needed.

“If there’s no mask mandate, even if I’m wearing one, I know that most of the people around me wouldn’t be wearing one, and I just didn’t feel comfortable sitting in an enclosed space for eight hours without other people masking,” Reza said.

“I know there are worse things happening in the world and that this is a relatively minor thing, but to me, the bigger disappointment is the fact that I can’t count on the federal government to make science-based decisions around the pandemic anymore, and that’s really disappointing.”

In a news release  Monday, Ottawa said the removal of its border restrictions has been facilitated by several factors, including modelling that shows Canada has largely passed the peak of the Omicron BA.4 and BA.5-fuelled wave, Canada’s vaccination rates, lower hospitalization and death rates, as well as the availability and use of boosters, rapid tests, and treatments for COVID-19.

Meanwhile, Canada may be beginning to see early signs of COVID-19 resurgence following a slight increase in infections over the past week, said Dr. Howard Njoo, deputy chief public health officer of Canada, on Monday.

When pressed further on the mask mandate, Duclos said its enforcement has become a burden for air workers, many of whom have faced abuse throughout the summer as major demand for travel clogged Canadian airports.

“We’re moving away from an … environment which has created pressures and difficulties for air travellers and air workers in particular. … We have heard from the industry the difficulties in making sure that … measure is being followed by all travellers,” Duclos said.

“We believe that most travellers will continue to wear those masks, but there will be some travellers who will choose not to do so and that’s all right.”

The science is “clear” that masking reduces COVID-19 transmission, said Njoo alongside Duclos on Monday.

“The change is that it is no longer obligatory. … It is something that Canadians can choose,” he said in French.

“I hope Canadians will make an enlightened decision about this because for me, I think it’s very clear that in a context where it’s very crowded and where there is poor ventilation, it would be advisable to continue to wear a mask.”

Ottawa had an “incredibly hard decision” to make on its mask mandate, said Kerry Bowman, a professor of bioethics and global health at the University of Toronto. However, he doesn’t believe it was “completely based on science.”

“I think there was economic factors which affect all of us, there were scientific factors and there was credibility. They have to make sure people will accept public health mandates in the future, and I think they didn’t want to lose credibility,” he told Global News.

Masking will remain an important layer of protection when it comes to COVID-19 this fall and winter, said Dr. Susy Hota, an infectious diseases specialist with the University Health Network in Toronto.

When it comes to mandates, governments will need to look not at just daily infections, but the impact the virus is having on Canada’s already “vulnerable” health-care system when considering whether to reintroduce them, she said.

“I think of them less as restrictions in many ways because the tools that we can use, things like masking, they’re not that restrictive,” she said.

“It’s not like a lockdown where we’re telling people you cannot go here, you can’t have more than five people in your home or in your circle. We’re going to be talking about things like masking and to be honest, of all the things that we could impose, it’s less restrictive than many other options.”

In the meantime, Canadians need to take advantage of updated COVID-19 vaccines to stay protected, said Omar Khan, a professor of biomedical engineering at the University of Toronto.

“Canadians have access to a better vaccine that’s more tailored to these new variants, and Canadians should consider getting that to offer them superior protection,” he said.

“As an individual, the best thing you can do now is to make sure your vaccinations are updated.”

As for Reza, she made it clear she doesn’t feel masking needs to be mandated forever, but until there’s a vaccine that can effectively prevent infections combined with less COVID circulating, it needs to remain.

“It’s really up to governments to protect Canadians and to really pay attention to the disproportionate effect that it can have on people who have disabilities, those who have pre-existing medical conditions and those who are older in our communities,” she said.

“This is what government is there for. This is why they removed smoking from indoor places. This is why we can’t smoke on airplanes. This is also why people have to wear seatbelts. There’s a reason why governments mandate certain things for your health and safety, and right now, this decision just does not make sense to me.”