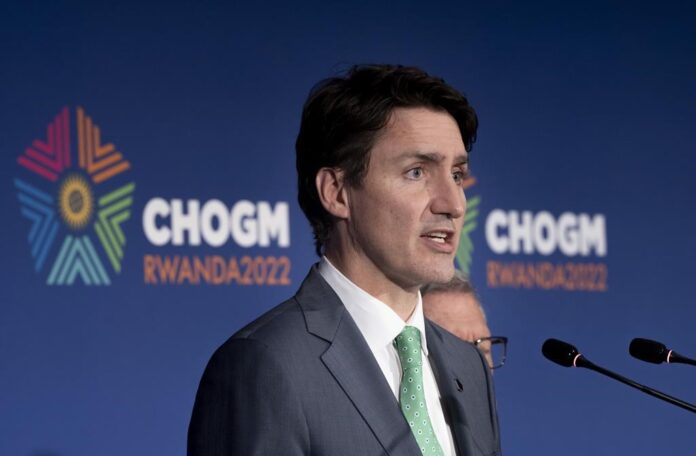 Prime Minister Justin Trudeau is headed to the G7 in Germany Saturday without a consensus from the Commonwealth to condemn the Russian invasion of Ukraine, but with a chorus of countries calling for help to overcome the fallout of the war.

Trudeau and Foreign Affairs Minister Melanie Joly arrived in Kigali, the capital of Rwanda, on Wednesday for the Commonwealth Heads of Government meeting, which has been dominated by the concerns of nations that are suffering from food scarcity.

In the final communique from the summit, the 54 Commonwealth countries said they discussed the conflict in Ukraine, “ underscored the need to respect the territorial integrity and sovereignty of all states,” and “ emphasized that all countries must seek peaceful resolution to all disputes in accordance with international law.”

The countries stopped short of condemning Russia, as Trudeau and United Kingdom Prime Minister Boris Johnson have done throughout the summit.

“I can assure you that the topic of standing up for Ukraine was much discussed,” Trudeau said at a press conference following the conclusion of the summit, referencing “strong language” in the communique.

Most Commonwealth Nations condemned Russia’s actions at a United Nations vote in March, but 10 abstained. Among them is India, whose Prime Minister Narendra Modi opted not to attend the Commonwealth summit and instead spoke virtually with the leaders of Russia, China, Brazil and South Africa.

Trudeau said Russian President Vladimir Putin has run a disinformation campaign and has even been “telling outright lies,” including blaming the food security crisis on Western sanctions against Russia.

He said food shortage stems from Russia’s illegal actions, including blockade at key ports, as well as the deliberate targeting of Ukrainian grain storage facilities through cruise missile strikes.

Convicted murderers win sentence appeals in Alberta, will get earlier chance to apply for parole

“I was very clear with our friends and partners around the table, and not just clear on Russia’s responsibility, but on how Canada and the West are stepping up,” Trudeau said.

Canada will be raising the growing threat of famine at the G7 in Schloss Elmau Germany, Joly said.

She said Canada was in “listening mode” at the Commonwealth meetings, where leaders of smaller nations were able to speak without the dominating presence of the United States, Russia and China.

“What is clear to us is that Russia is weaponizing food and putting a toll on many countries around the world, and putting 50 million lives at risk,” Joly told reporters Friday in Rwanda.

Trudeau had attempted to meet with the chair of the African Union Commission, Moussa Faki Mahamat, for several days during the Commonwealth summit but the sit-down was repeatedly postponed and eventually cancelled.

Shortly after Trudeau arrived in Rwanda, the government announced Canada would dedicate a new ambassador to the African Union, which has suffered from the food shortages inflicted on the continent as a result of the warin Ukraine.

Both Ukraine President Volodymyr Zelenskyy and Putin have met with representatives of the African Union, with Russia blaming sanctions against its government for stopping the flow of grain.

At the conclusion of the Commonwealth summit, Trudeau announced $94 million in funding for various education initiatives and $120 million to support gender equality and women’s rights in Commonwealth countries.

Some of the other voices the prime minister has promised to centre at his international meetings, including the G7 summit, belong to youth leaders who spoke at a Saturday-morning event focused on issues facing young people around the world.

Some of the delegates spoke about the devastating effects of climate change, particularly around remote island nations where infrastructure cannot withstand natural disasters and rebuilding efforts take years. The onslaught takes a toll on education and health services, one delegate told the forum.

This report by The Canadian Press was first published June 25, 2022.