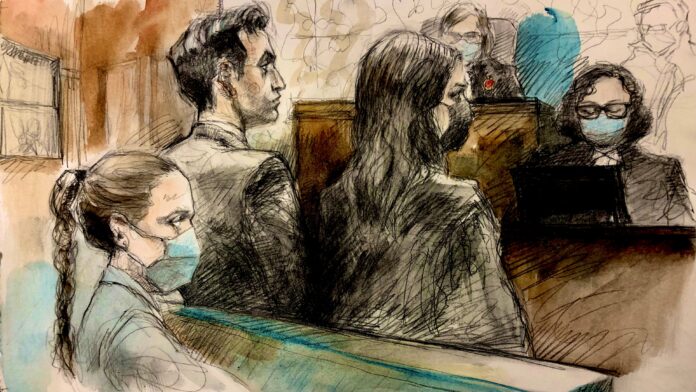 TORONTO — Prosecutors allege Canadian musician Jacob Hoggard repeatedly and violently raped a teen girl and a young woman in two separate incidents months apart, leaving each of them bleeding, bruised and sore as they left his Toronto-area hotel.

In an opening statement to jurors Thursday, Crown attorney Kelly Slate laid out the evidence prosecutors expect will emerge in the singer’s trial over the next few weeks.

Each complainant is expected to testify that what happened in Hoggard’s hotel room in the fall 2016 wasn’t what she envisioned or wanted, and that she was “crying and saying no” throughout the hours-long incident, Slate told the court.

An agreed statement of facts read in court Thursday said Hoggard had a “sexual encounter” with each of the complainants on the days they came to his hotel.

The musician has pleaded not guilty to two counts of sexual assault causing bodily harm and one of sexual interference, a charge that refers to the sexual touching of someone under the age of 16.

Prosecutors said court will hear the first complainant was a longtime fan of Hedley, the band Hoggard fronted, and went to one of their shows for the first time at age 10.

The girl met Hoggard after a show she attended with her parents for her 13th birthday, Slate said. Hoggard exchanged phone numbers with the girl’s parents and, over time, helped them obtain tickets and backstage passes for other Hedley shows, she said.

They began communicating directly after the girl copied Hoggard’s number from her mother’s phone when she was 15, and the Crown alleges the messages became “romantic and sexual in nature.”

Hoggard “told her she was beautiful, that he loved her and that he saw a future with her,” Slate alleged.

Hoggard arranged for the teen to come to a Hedley show at what is now the Scotiabank Arena in Toronto in April 2016, sending a limo to pick up the girl and two friends in their hometown north of the city, according to the agreed statement of facts.

Canadian flight crew could be sent back to jail in Dominican Republic: airline

The Crown alleges that once backstage, the singer was “overly affectionate” with the teen, touching her buttocks and at one point trying to kiss her neck when she was too young to consent.

The girl left early after pretending she had been called in to work, then blocked Hoggard from messaging her and never went to a Hedley concert again, prosecutors said.

The agreed statement of facts said the girl went to the hospital on Oct. 12, 2016, nearly two weeks after the alleged incident.

The second complainant met Hoggard on Tinder when he was in Ottawa to perform for WE Day, and the two began exchanging messages through text and Snapchat, the Crown said.

They planned to meet in Toronto in November 2016, and while the woman anticipated they would be having sex, she did not consent to what happened, Slate said.

Hoggard purchased train tickets for the woman to come see him in Toronto, according to the agreed statement of facts.

Prosecutors allege Hoggard raped the woman vaginally, anally and orally over several hours, slapped her, spit in her mouth and choked her so she couldn’t breathe. At one point, the Crown says, he dragged her to the bathroom by her legs.

The woman took the train back to Ottawa that evening and her then-roommates are expected to testify that she was “upset, crying and emotional” when she got home, Slate said. One observed that she could barely sit down and had trouble walking, the Crown said.

She went to the doctor within a week of the alleged incident, according the the agreed statement of facts.

Hoggard was arrested and charged in 2018 and a preliminary hearing was held the following year.

He was originally set to face trial in January 2021 but the case was postponed on multiple occasions due to the COVID-19 pandemic, which saw new jury trials put on hold for months.

Neither complainant can be identified under a publication ban. The identities of several witnesses are also protected under the ban.