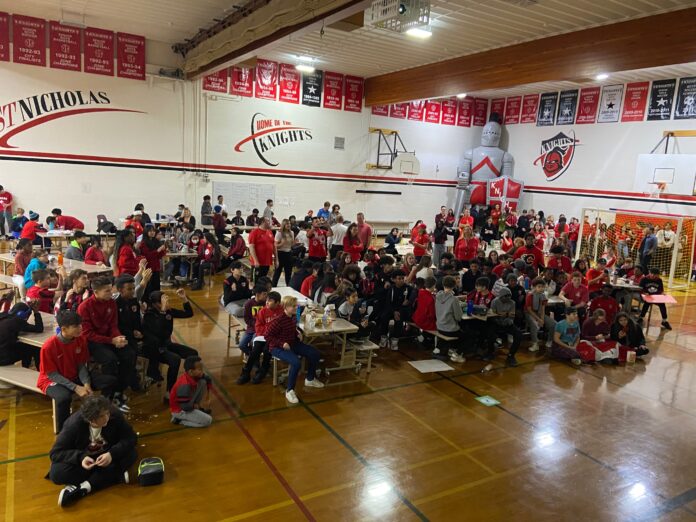 It was a moment some Canadian soccer fans said they’d been waiting for their whole lives: seeing their country in the World Cup.

At watching parties across the country Wednesday, fans gathered to cheer on the national team as it made its first appearance since 1986 in the international soccer tournament.

Morgan Stacey, who was not born the last time Canada was in the World Cup, said it feels “pretty incredible” to cheer on Team Canada.

“It’s the first time in my life that I have ever gotten to see them compete in this tournament,” he said. “I’m pretty excited!”

Stacey, 28, was among at least 150 people watching Canada take on Belgium at the Burgundy Lion Pub in Montreal.

As Canada prepared to take a penalty shot early in the game, fans were on the edge of their seats, screaming and shouting as star winger Alphonso Davies lined up for the shot. The excitement turned to dismay when the Belgian goaltender stopped the attempt.

For some fans, including members of Montreal’s large Belgian community, there were divided loyalties. Noel Fourcroy, 42, a Belgian who has lived in Montreal for 15 years, said he was rooting for his home country.

“I’m pretty excited. It’s a very unique moment because it’s my country of origin and my country of adoption. It’s a curious melange. I confess I stay with Belgium today, but I will be very happy to follow Canada after,” Fourcroy said.

At St. Nicholas Catholic Junior High in Edmonton, where Davies attended and played in the school’s soccer academy, students filled a gym where the Canadian star used to play to cheer on their favourite alumnus.

At St. Nicholas Catholic Junior High in Edmonton, where Davies attended and played in the school’s soccer academy, students filled a gym where the Canadian star used to play to cheer on their favourite alumnus.

A giant screen was set up and the kids joined in a loud and raucous version of O Canada along with the team on the screen. A giant drum, like the one the team brings out at the end of the matches, boomed along.

Malik McDonald, 13, a student at the soccer academy who plays as a striker, admitted he sometimes models himself after Davies.

“It’s incredible thinking that someone from Edmonton, Alberta, going to St. Nic’s and making it to such a high level with such amazing footballers. It just inspires me that I could do the same,” he said.

Mary Mahe, another St. Nicholas student, said watching someone from her school on the world’s biggest soccer stage is inspiring.

“It’s really motivating, because someone in my own position went so far in their career, it gives you hope that you could do that, if you try hard enough.”

In downtown Toronto, where dozens of fans stood in front of large screens at an electronics store in Eaton Centre, recent upsets at the tournament were giving fans hope.

Mohammad Ali, who was watching the game with friends, said that if Saudi Arabia can beat Argentina and Japan can beat Germany, Canada can also beat Belgium.

“I think we win the whole thing,” he said. “I love the team too much and I love the country too much to say anybody else will beat us.”

Rob Harris, another fan, said even though Belgium is the favourite, the Canadian team might have luck on its side.

Belgium is currently favoured to win Group F, which also includes 2018 finalist Croatia and Morocco, ranked 22nd in the world. However, it will be without its star striker Romelu Lukaku, who hasn’t played a match in nearly a month because of a thigh injury.

Canada is ranked 41st in FIFA standings while Belgium is second.