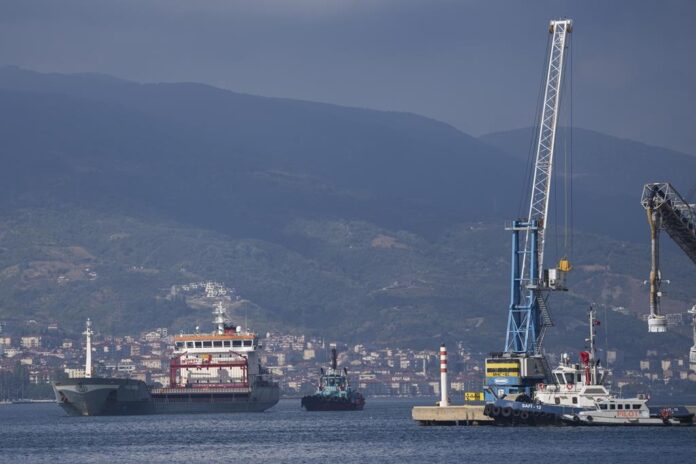 The first of the ships to leave Ukraine under a deal to unblock grain supplies and stave off a potential global food crisis arrived at its destination in Turkey on Monday.

The Turkey-flagged Polarnet docked at Derince port in the Gulf of Izmit after setting off from Chornomorsk on Aug. 5 laden with 12,000 tons of corn.

“This sends a message of hope to every family in the Middle East, Africa, and Asia: Ukraine won’t abandon you,” Ukrainian Foreign Minister Dmytro Kuleba tweeted. “If Russia sticks to its obligations, the ‘grain corridor’ will keep maintaining global food security.”

A total of 12 ships have now been authorized to sail under the grain deal between Ukraine and Russia, which was brokered by Turkey and the United Nations – ten outbound and two headed for Ukraine. Some 322,000 tons of agricultural products have left Ukrainian ports, the bulk of it corn but also sunflower oil and soya.

The first ship to depart Ukraine, the Sierra Leone-flagged Razoni, which left on Aug. 1, still hasn’t reached its destination in Lebanon and was anchored off Turkey’s southern coast on Sunday evening, according to the Marine Traffic website.

The Sacura left Yuzhny carrying 11,000 tonnes of soybeans to Italy and the Arizona left Chornomorsk with 48,458 tonnes of corn bound for Iskenderun in southern Turkey.

Four ships that left Ukraine on Sunday are expected to anchor near Istanbul on Monday evening, the Defense Ministry said. They are due to be inspected on Tuesday.

Under the arrangement, ships leaving Ukraine are checked by officials from the three countries and the U.N. to make sure they carry only grain, fertilizer or food and not any other commodities. Inbound vessels are checked to ensure they are not carrying weapons.