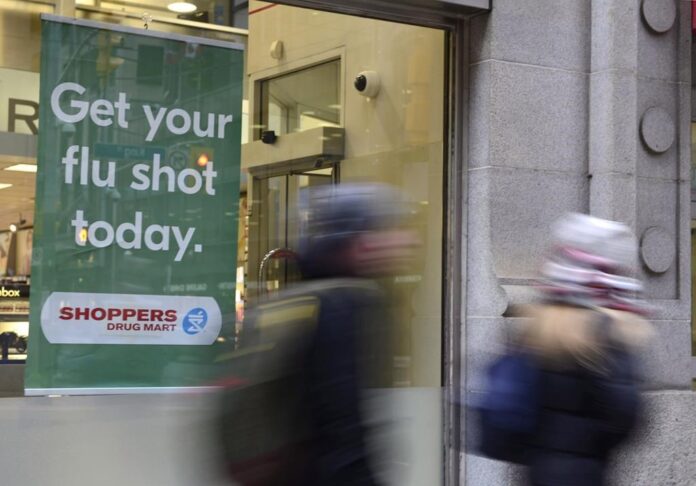 With flu activity in Canada reaching well above typical levels, infectious diseases experts are concerned about lower uptake of the flu shot, especially since this year’s dominant strain can cause more severe illness.

The flu shot can be especially beneficial this season, they say, as this year’s vaccine contains protection against the strain of flu proving most dominant, which is not always the case.

As of Friday, the percentage of positive influenza cases rose to 16 per cent from 6.3 per cent the previous week, Canada’s chief medical health officers, Dr. Theresa Tam, said in a briefing last week.

This is more than three times the seasonal threshold of five per cent, which prompted the Public Health Agency of Canada (PHAC) to declare the beginning of a national influenza “epidemic” last week.

The vast majority of flu cases detected and lab tested this year so far have been caused by a strain of the influenza A virus known as H3N2. A very small percentage – just three per cent to date – were the influenza A strain known as H1N1, according to FluWatch data released weekly by PHAC.

Both of these strains are included in this year’s flu vaccine, which also includes two isolates of influenza B virus.

International experts convened by the World Health Organization before every flu season provide advice, based on evidence from global surveillance, on what types of flu viruses are expected to cause the most illness and therefore should be included in the seasonal flu vaccine.

That the most dominant strain circulating this year is included in this year’s flu vaccine is both good news and bad news for Canadians this flu season, says Matthew Miller, director of the Michael G. DeGroote Institute for Infectious Disease Research at McMaster University.

“The good news is that the vaccine is a good match. The bad news is that H3N2 strains tend to cause more severe infections than H1N1 strains,” Miller said.

Many Canadian physicians and infectious diseases experts have been bracing for a challenging flu season after observing Australia’s experience with the virus earlier this year.

Australia’s flu season is often used by experts to predict what could happen in Canada, and this year that country saw a significant rise in flu cases which peaked earlier than usual after two years of almost no flu cases amid COVID-19 safety measures.

This led to the worst flu season in Australia in five years – a situation exacerbated by the H3N2 strain that is known as being more “risky” for its greater potential to land vulnerable patients in hospital, says Dr. Samir Sinha, director of geriatrics at Sinai Health and the University Health Network in Toronto.

That’s why Sinha is urging all Canadians to get their flu shot this year – to protect not only themselves, but also those most likely to experience complications and death.

6:31
Triple threat of illness this winter prompts calls for masking from experts

“When the influenza remains the second leading vaccine-preventable cause of death in Canada and it kills thousands of mostly older people every year, there is a real good reason why we’re trying to get our vaccination levels to where the public health agency has set a target for the last decade of at least 80 per cent,” Sinha said.

“But we’ve never reached that. We’ve only made it to 70 per cent in our best year among older people.”

Health Canada says it will not have estimates of how effective the flu shot was for the 2022-23 season, or how many Canadians received their vaccines, until February or March.

The agency did note, however, that last year only 39 per cent of all adults in Canada got a flu shot. This was similar to 2020 which saw just 40 per cent vaccine coverage for influenza among adults in Canada.

Anecdotally, some physicians and experts who study vaccine trends say they’re noticing uptake of the flu vaccine is low so far this year.

“The public is understandably vaccine-weary, but we need to remember that even if we as individuals are not at high risk, we need to protect the vulnerable.”

Will COVID vaccine fatigue lead to low flu shot uptake? Why some experts are concerned

Children and adolescents are being especially hard hit by the flu this year, Miller noted – a reality that is reflected in FluWatch data gathered by PHAC.

Among flu detections for which age information was available last week, 56 per cent of cases were among individuals aged 0-19 years old, the PHAC data shows.

Dr. Donald Vinh, an infectious disease specialist and medical microbiologist at the McGill University Health Center in Montreal, says it is surprising to see high numbers of lab-confirmed flu cases among children and youth, because lab testing for influenza is done mainly in hospitals upon admission. In a typical year, seniors are more likely to be admitted to hospital with influenza.

The lifting of COVID public health measures like masking and physical distancing in places like schools and daycares are likely playing a role, especially since young people are generally healthy and often feel “impervious to diseases” and less likely to voluntarily follow the “strong recommendations” being made on masking, Vinh said.

RSV not just a kids problem, doctors warn as infections surge in Canada

“It could also be that adults, especially elderly adults who are typically at risk for severe flu, are vigilant because of COVID to maybe just continue their protective measures,” he said.

Given that flu has arrived earlier than usual this year and also that cases of respiratory syncytial virus (RSV) and COVID-19 are also circulating and infecting large numbers of children, the case has never been stronger for all Canadians to get their flu vaccine, Vinh said.

“I’m concerned about this flu season, not exclusively because of the flu, but because of this (mix) of these respiratory viruses,” he said.

“When we have a triple threat that’s attacking our health-care system, we really need to take out all the guns to protect our health-care system so that it doesn’t collapse — and that includes things like making sure people are up to date with their COVID vaccine and vaccinated against flu.”

Sinha agreed, noting that while the majority of cases of flu may be among children and teens now, the natural progression of these illnesses will lead to cases among their parents and grandparents soon.

And if a significant number of young people are getting so ill that they require hospitalization from the flu and RSV – which can also cause severe illness among seniors – the impact on vulnerable or immunocompromised seniors could be devastating, Sinha said.

How to get messaging right on masks, vaccines as ‘triple threat’ of viruses swirl

“The best thing you can do to protect yourself against the flu is by getting the flu vaccine. And this year it’s a particularly good match, especially when the dominant strain that is circulating is a particularly virulent one as well.”

Sinha added that enhanced flu shots are available for older Canadians, which is something they should inquire about when trying to book their vaccine.