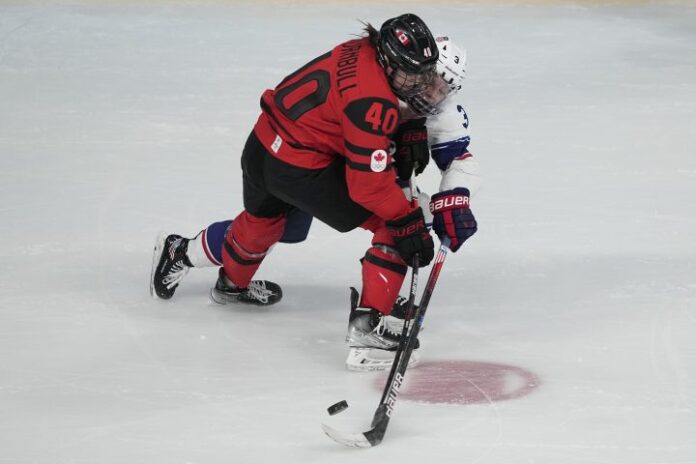 The federal government suspending Hockey Canada’s funding because of problems distant to the national women’s team can still affect it.

The bulk of training costs for men’s teams are borne by pro or junior clubs who loan players to Hockey Canada for international tournaments.

So when federal sport minister Pascale St-Onge froze Hockey Canada’s funding over its handling of an alleged sexual assault by members of the 2018 world junior men’s team, the women worried about the financial fallout for their team.

“It’s a concern for sure,” forward Blayre Turnbull said. “We consider ourselves professional athletes without the professional paycheque.

“A lot of our money comes from the government and comes from other organizations like that. Our program would be greatly impacted if the freezing of funds continues to happen.”

Among the 142 senior and developmental players currently participating in a Calgary camp are 19 women who won Olympic gold in Beijing in February.

1:56Alleged victim denies Hockey Canada’s initial claims she did not cooperate with police

The first women’s world championship to be held in the same calendar year as an Olympic Games opens Aug. 25 in Denmark.

Canada’s women will attempt to defend the world title won a year ago in Calgary where they edged the U.S. in overtime in the final.

Their Denmark preparation isn’t curtailed, but the financial future of the women’s program seems murky to the players under the current sanctions.

“It’s a valid concern, especially long term,” said Gina Kingsbury, director of hockey operations for Hockey Canada’s women’s teams, to The Canadian Press. “We’re entering territory that we don’t fully understand. I’m trying to focus on what I can control.

Hockey Canada later revealed members of the 2003 world junior men’s team were under investigation for alleged sexual assault in Nova Scotia. The allegations haven’t been proven in court.

But federal money is withheld until Hockey Canada meets St-Onge’s conditions. They are a financial audit of the organization, producing the recommendations of an investigative report by a third-party law firm, developing an action plan to change culture, and becoming a signatory to the Office of the Integrity Commissioner.

Hockey Canada has taken steps to meet those terms, but St-Onge told members of Parliament last week the money won’t start flowing again “until we’re satisfied the conditions have been met.”

“I think it’s really important that these issues are being talked about, that we’re going to get down to the bottom of it,” women’s forward Brianne Jenner said. “That’s the hope and I think all Canadians want to see that.”

The women’s team received $6 million in Own The Podium funding over the four years leading into Beijing, where Canada edged the U.S. for gold, while the men’s teams received $1.8 million over the same quadrennial.

OTP directed $4 million during the Beijing quad to the all-male para hockey team that earned silver.

The women hope they won’t pay a disproportionate price for the actions of others under the Hockey Canada umbrella.

“Actions have consequences and people are held accountable for those actions, but what I know is the women’s hockey culture that we’ve created, and it’s taken a lot of work, is a safe environment,” defender Jocelyne Larocque said. “I think Canadians that follow us know that.”

As full-time, high-performance athletes, the women and para hockey athletes receive monthly Sport Canada cheques from the Athletes Assistance Program (AAP) of about $1,800 per month.

Sport Canada has confirmed those cheques will continue.

“There has been no suspension of funding from the AAP to either the women’s or Paralympic national team program carded athletes,” a spokeswoman told The Canadian Press in an email.

While Imperial Oil, Scotiabank and TELUS withdrew their sponsorship of the world junior men’s hockey championship, those companies indicated they will continue to financially support youth programs and women’s events.

“I hope the public understands that our women’s game is healthy, that the culture we’re talking about doesn’t quite apply on our side,” Kingsbury said.