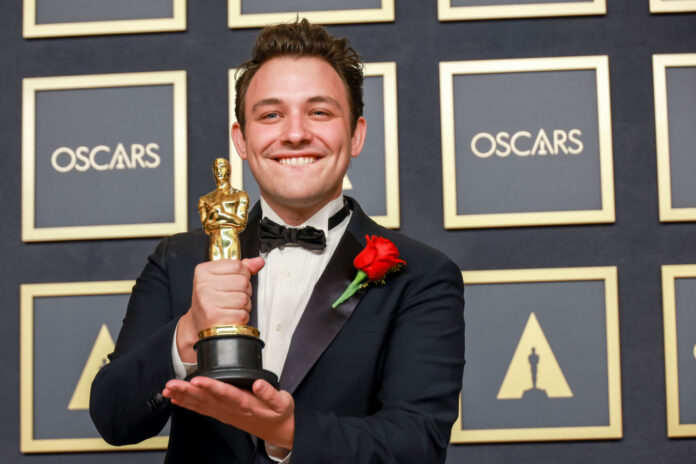 He took home the Oscar on Sunday night in Los Angeles, for his short documentary “The Queen of Basketball.”

“It was a full body sort of emotional experience,” he told Global News Morning, in an interview that will air on Wednesday, about the moment he heard his name.

His mother, who was his date, gave him a hug and the rest is a bit of a blur.

His 22-minute film centres on the story of Lucy Harris, the only woman to be drafted by the NBA and the first Black woman inducted into the Basketball Hall of Fame.

During his acceptance speech, Proudfoot saluted the late Harris and noted her family was in attendance.

“If there is anyone out there that still doubts there is an audience for female athletes, let this Academy Award be the answer,” he told the applauding audience at the Dolby Theatre.

He also called for President Joe Biden to bring Brittney Griner home to the United States. Griner, an WNBA all-star, has been detained in Russia since mid-February after allegedly having hashish oil in her luggage at an airport.

“If I was lucky enough to win, I saw it as an opportunity to speak out on behalf of things that would have mattered to Lucy. And I know that equity in sport, gender parity in sport was what she cared about,” he said.

“And so even though I’m not an athlete myself, I have learned a lot.”

Harris, who Proudfoot called “an incredible pioneer of basketball,” passed away after the film was completed, but before the Oscar nomination.

“Everyone had the image of her on the red carpet emblazoned … in our minds,” he said.

“It was a sudden loss. And I think this Academy Award is an excellent way to honor her legacy. And I hope it helps shed light on Lucy herself and other women like her.”

This was Proudfoot’s first Oscar win. He was nominated last year for the short documentary, ‘A Concerto is a Conversation.’

While there were many stars to hobnob with on the red carpet, there was one particular “hero” Proudfoot said he was excited to meet shortly after winning his award.

“When I walked down, there is like a commercial break and I saw Steven Spielberg just sitting there on his phone,” he described.

Once he mustered the courage, he said he decided to approach the famed director — Oscar statue in hand.

“He just saw me, right. So I went over and I said, ‘Hey, you know, I wouldn’t be here without you. You really inspired me to become a filmmaker.’”

To his surprise, Spielberg asked him if he wanted to pose for a photo. Then, he called out to cinematographer Janusz Kaminski to snap the pic.

“So he hands my phone to Janusz Kaminski, the greatest image maker that walked on the face of the planet and he’s saying, ‘OK, you go here and let’s get the stage in the back’ and whatever doing his thing,” Proudfoot said.

Oscar-winning director Ben Proudfoot shows off his photo with Steven Spielberg, taken at the Academy Awards.

The result, said Proudfoot, was a great moment and memory he described as a “highlight of my life.”

It was also a moment that Proudfoot never thought would happen, while growing up in Halifax.

“I think a lot of times when I was younger and I hadn’t really started having any success, I thought here’s no way that I’m going to be able to achieve crazy things or watching behind the scenes of Steven Spielberg. No, I’m never going to be able to do that because I’m from Halifax,” he said.

Proudfoot said he hopes his win inspires the next generation of filmmakers, who like him, are “a product of Nova Scotia.”

“What I have to say to any anybody, especially young people in Nova Scotia who have aspirations that seem a little far-fetched: anything is possible and likely the resources and the people who can help you get it right there in Nova Scotia,” he said.