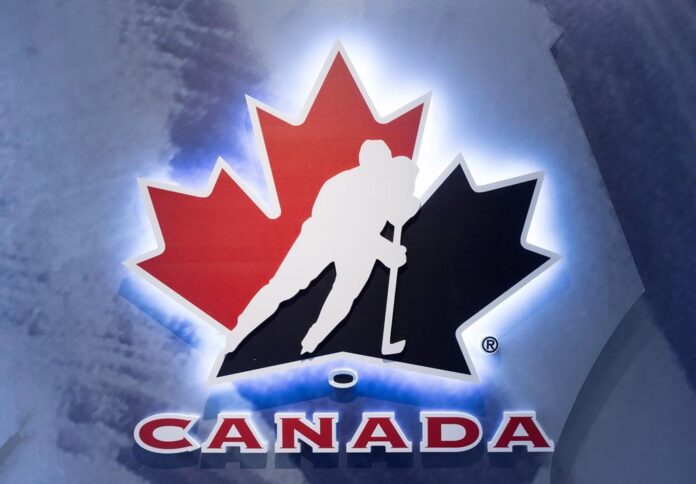 Junior hockey players who may have been involved in an alleged sexual assault at a Hockey Canada event in 2018 were not required to cooperate in an investigation into the matter, the organization’s top executives told MPs Monday.

Outgoing CEO Tom Renney and president and COO Scott Smith, who will soon be replacing Renney as CEO, told a House of Commons committee that instead players were “encouraged” to cooperate.

Because of that, the pair could not definitively say how many players participated, and gave wildly different answers when pressed by lawmakers.

“I don’t know for sure, but because of the incomplete (investigation) report, there is not much more we have to offer in terms of information along those lines,” Renney said, after suggesting only four to six players spoke to investigators.

“I believe the number is larger than that, I just don’t have that at my fingertips,” Smith added, after Renney referred to him for more “definition” to his answer. “But it definitely wasn’t four to six.”

The executives were called to testify after TSN reported Hockey Canada had settled a lawsuit with a woman who accused eight Canadian Hockey League players, including members of the 2018 national junior team that won world junior gold that year, of sexual assault following a Hockey Canada Foundation gala in London, Ont., in June of 2018.

According to the statement of claim, the woman claimed she was repeatedly assaulted while intoxicated in a hotel room.

She filed a $3.55-million lawsuit against Hockey Canada, the CHL and the unnamed players. The lawsuit was settled, but no details of the settlement have been released. The allegations against the players were never proven in court.

The Canadian Heritage committee was tasked in part to ensure no taxpayer money was used in the settlement. Government assistance accounts for six per cent of Hockey Canada’s funding, according to the organization’s 2020-21 annual report which didn’t specify how much money that is.

Renney said Monday that no public funds were used, while Smith said a portion of Hockey Canada’s investments was liquidated to pay for the settlement, adding government funding is kept separate from those accounts.

But the hearing quickly expanded to larger questions of accountability and responsibility.

Renney and Smith testified that Hockey Canada notified London police and a third-party investigator, Henein Hutchison LLP, within hours of learning of the allegations from the woman’s stepfather the day after the incident is alleged to have taken place.

Both of those investigations were suspended in September 2020, they added, and did not reveal the identities of the eight players alleged to have been involved.

“That third party, nor the London Police Service, were able to confirm who the accused were,” Smith said.

Because the woman did not wish to speak to investigators or identify her alleged abusers, there was no further effort made to identify the players involved, the executives said.

Renney’s estimation that only four to six of the 19 junior team members were known to have participated in the investigations drew some of the most concern and attention from committee members.

When pressed again near the end of his testimony, Smith amended the number again to say he was “fairly confident” it was between 12 and 13.

“I think the number Mr. Renney referred to was not necessarily the number who did participate, but those who did not,” he said.

Smith said discussions are currently underway to change the code of conduct so that players can be compelled to participate in future investigations.

He and Renney pointed to the appointment of a director of safe sport and other steps the organization is taking to improve the culture within Hockey Canada. Some of those steps are direct responses to the alleged 2018 incident, including a crackdown on underage drinking at public events and a strengthening of mandatory sexual harassment training.

Yet Renney also admitted that “lines are blurred” between the conduct required by Hockey Canada of players during competition and practices, and at public events like the London gala — a divide the organization is working to address.

MPs voiced concern that the players involved may still be playing on teams, including in the National Hockey League, and could even become coaches one day. The NHL has launched its own investigation into the matter.

Yet Renney repeatedly suggested those players would only face disciplinary action if the woman were to change her stance and come forward with information that would identify them.

“I am concerned that if she in fact wishes not to be identified, and at this point in time wishes the players not be identified, I really don’t know what more we can do along those lines,” he said.

Renney said because the investigations are incomplete, a report they have received from Henein Hutchison on its findings is also incomplete and could not be released, even if redacted, as it would be “speculative.”

Smith also would not say if a non-disclosure agreement is in place to protect the details of the settlement, only telling the committee they are “covered by settlement privilege.”

Yet Sports Minister Pascale St-Onge later told the committee that Renney had called her on May 24 — two days before TSN’s report was released — to alert her to the allegations, and that a NDA prevented him from giving any details about the settlement.

The committee has the power to subpoena Hockey Canada for any documents related to the investigations and the settlement, which would override solicitor-client privilege.

Smith estimated Hockey Canada sees between one to two allegations of sexual violence reported to leadership per year over the past five years.

“Let me be clear, just one is too many,” Smith said.

“We certainly have an issue. How widespread that issue is, I’m not sure. … If we have issues like this in the game, even if they’re limited in scope or limited in number, it’s an issue that’s important for you and me and every Canadian, and it’s an issue that we need to eliminate from the game.”

St-Onge told the committee she did not have details of any other sexual assault investigations.

She has ordered a financial audit of the settlement, which Hockey Canada said it will cooperate with.