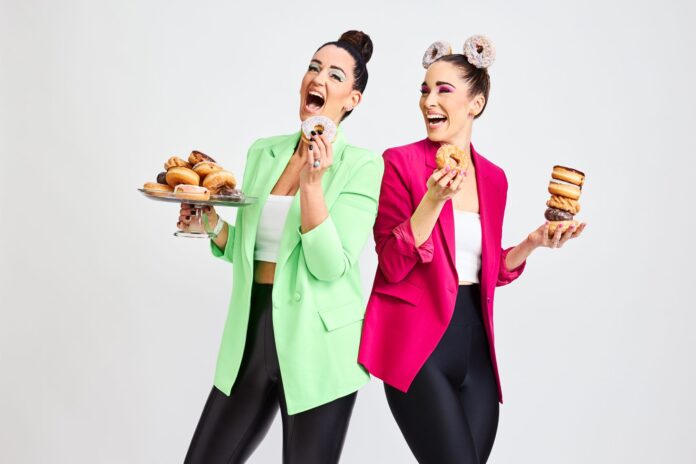 Ever wonder what it’d be like to eat a donut every day? Josée Cormier and Alicia Stafford of Your Way Weight Loss recently gave it a try for an entire month.

“The honey cruller was my favourite. Between the two of us, we ate 125 donuts in February,” said Stafford, executive leader of the Moncton-based weight loss brand.

Thursday night, their self-produced documentary Would You Eat A Donut A Day? premiered at the Capitol Theatre in Moncton to more than 500 in attendance. The evening also featured a Q&A session with the two answering questions from audience members.

Cormier and Stafford built up interest for the documentary by posting daily updates to their 270,000 followers on TikTok during the filming period.

The movie, created with help from Madhouse Creative Productions, documents their 28-day journey of eating nothing but Tim Hortons for breakfast, lunch and dinner.

Cormier, the founder of Your Way Weight Loss, said one of the main messages of the documentary is to prove that weight loss can be accessible to anyone. She also hopes it can bring awareness to how creating a calorie deficit can be the determining factor in a successful diet.

Cormier and Stafford’s movie was screened for the first time Thursday night.

Contrary to popular belief, Cormier and Stafford said they lost weight from their Tim Hortons-specific diet.

Why were 2 fugitives on a small plane that crashed in Ontario? The story so far

In ruined Ukrainian village, stranded elderly residents are all who remain

“We ended up losing a lot of weight during the month of February, eating 2000 calories of Tim Hortons every day, so that’s a fun conversation right there,” Cormier said.

“Clearly, if we can lose weight eating Tim Hortons every day, it means pretty much that it’s accessible, you can do it your way.”

The two women hope the documentary can create meaningful conversations around how people speak about food and how it has an impact on how we behave.

The two said the main reason they lost weight was due to a calorie deficit in eating only from the Tim Hortons menu, in comparison to their regular diet. They said they continued to exercise but never changed their regular exercise routine.

Despite the surprisingly positive results that came from their experiment, it didn’t come without its share of challenges.

“It was the mental piece, so I wasn’t going out with my friends,” Stafford said. “My kids are used to me eating the same meal as them, so, it really impacted my life, my lifestyle, so I missed that,” said Stafford.

‘The look on her face, I will never forget it’: Alberta father sheds pounds for daughter

Cormier says if you don’t feel like yourself within a meal plan, you could be “putting your life aside” in pursuit of weight-loss results.

“And you’re like ‘it’s working, I’m getting what I want,’ and you’re not recognizing that you’re actually missing your core values of going out with your friends, eating with your family – that’s important to people,” she said.

Cormier, who’s also a spin instructor, said she discovered Tim Horton’s Bagel BELT sandwich on the fifth day of shooting and ate it every day for the rest of the month. She said her favorite donut is the Boston cream.

The two hope the documentary will draw the attention of Tim Hortons themselves, also saying they believe that it is “Netflix-worthy.”

“We want to be on Netflix, we want a Tim Hortons commercial, we need a Timbit named after us,” Stafford said.

The premiere version of Would You Eat A Donut A Day? is available to purchase on the Your Way Weight Loss official website.