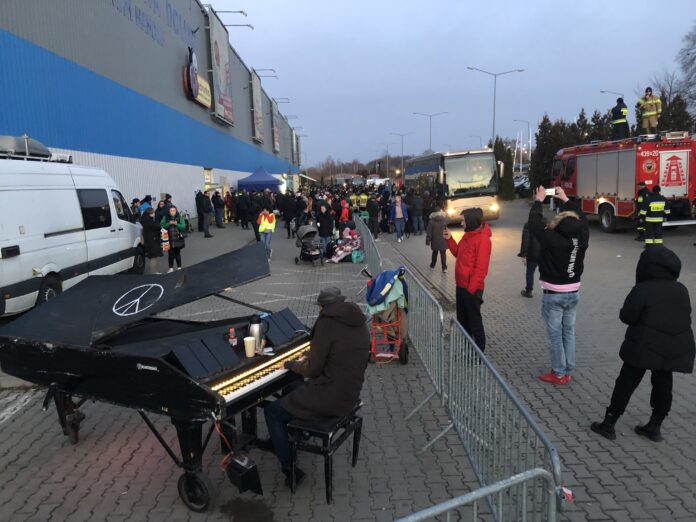 The strength and resolve of the people of Ukraine in their fight against Russian invaders have galvanized support all over the world.

These are tough, tough folks who will have none of Vladimir Putin’s nonsense and are working together to maintain their right to sovereignty.

Music-related stories from the Russian invasion of Ukraine

Maintaining morale in the face of this invasion is not easy, especially when hypersonic missiles are destroying civilian targets. But sometimes, music is able to come to the rescue — at least for a little while.

Here are some of the many examples we’ve seen so far.

Before this madness began, Very Lytovchenko was a violinist with the Kharkiv City Opera Orchestra as well as a highly regarded music teacher. She’s been forced to live in the basement of her apartment building to escape the relentless bombing. That, however, hasn’t stopped her from YouTubing her recitals in an act of defiance.

She’s since been joined in this performance by 94 other violinists from around the world.

Denys Karachevtsev is making a statement that he is not afraid of Russia. He’s taken to perform Bach’s Cello Suite No. 1 amidst the rubble that was once Kharkiv.

The Let It Go girl

In another act of defiance, seven-year-old Amelia Anisovych went viral after singing Let It Go from the Disney movie Frozen in a bomb shelter. She was later safely evacuated to Poland where she sang the Ukrainian national anthem at a benefit concert.

The rock star who is still touring Ukraine

This has to be the toughest touring itinerary ever. Sviatoslav “Slava” Vakarchuk is the frontman for Okean Elzy, the most successful rock band in Ukraine. He’s going throughout the country performing songs inspired by both war and love. Stops have included Kharkiv in the midst of shelling and hospitals where he performed for the wounded and medical staff.

This Ukrainian punk band has repurposed The Clash for Kyiv Calling

Beton asked The Clash’s people if they could re-write the lyrics for London Calling. The Clash agreed and the result is Kyiv Calling. Proceeds are going to an organization called FURM, the Free Ukrainian Resistance Movement. Among other things, they’re working on a communication system that will link defenders. (Note that there’s some strong language in this version.)

Filling sandbags to music in Odesa.

A little music at work makes for light hands for the people working to fortify Odesa.

Pussy Riot, Putin’s least-favourite domestic band, will not let up. Despite crackdowns, arrests, bogus trials, and imprisonment, the group continues to poke at him with a very, very sharp stick. Nadya Tolokonnikova from the group says they’ve already raised over US$7 million for Ukrainian humanitarian aid. She also released this video directed at Russian protestors.

Kurt Cobain would be proud.

Meanwhile, musicians and music organizations outside the country continue to offer support.

Back in 1985 when the Cold War was threatening to get very hot, Sting released Russians, a single from his album, The Dream of the Blue Turtles. Ian Thornley and Big Wreck must have had a feeling something bad was going to happen, so back in January, they recorded this cover. It’s now available as a charity single with all proceeds going to the UNHRC to help Ukrainian refugees. You can listen to the song on bandcamp.com. Spend $1.25 for the track.

Thanks to smartphones and social media, this may go down as the war documented the most by citizens and journalists. Belle and Sebastian recorded this benefit song (proceeds to the Red Cross) which comes with a video shot by people covering the war.

The American radio industry is promoting this anthem for Ukraine

Shortly after the invasion, this sone, Tears for Ukraine, was commissioned by a couple of American radio industry people. They’re hoping that stations all over the world play it.

Finally, the comedian who crashed a city council meeting to rap about the evils of Putin

Okay, he’s something of a troll, but he did get people’s attention with this stunt.