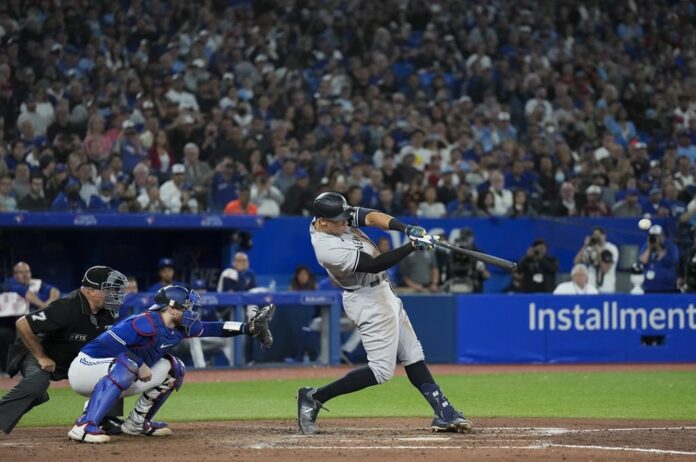 As the ball screamed toward the Blue Jays bullpen beyond the left-field fence, Mayza (8-1) waved his arms in dejection. The two-run shot not only blew the game wide open during an 8-3 Yankees victory, but the blast also allowed Judge to match Roger Maris’ 61-year-old American League record for homers in a season.

“I had an idea with (the) trajectory and how hard the ball was hit that (it had a) good shot of going out,” Mayza said.

“I wanted to attack him with sinkers and challenge him to get the ball on the ground, especially with the runner on first. It was a pretty good at-bat. I made one mistake, and he took advantage. So kudos to him. Congratulations to him. I just left one too many pitches over the plate to a really good hitter.”

As Judge rounded second base, he pointed to Roger Maris Jr. and his mother Patty sitting in the first row behind the Yankees dugout. Hicks met his teammate with a hug after Judge touched home plate.

“It’s an incredible honour,” Judge said. “Getting a chance to be associated with one of the Yankee greats, one of baseball’s greats, to be enshrined with him forever — words can’t describe it.”

The Yankees (96-59) snatched the rubber match of the three-game set, in which they clinched the AL East over the Blue Jays (87-69) on Tuesday.

Toronto inched closer to a wild-card berth after the Baltimore Orioles lost 3-1 in Boston to the Red Sox. A Blue Jays win, or Orioles’ loss clinches a playoff spot for Toronto.

The Orioles finish their series in Boston on Thursday afternoon, while the Blue Jays are off until Friday.

“These guys are excited to be in this position,” interim manager John Schneider said. “It’s more excitement than nerves or anything. I think the guys will come out and be ready to roll on Friday night.”

Judge had gone seven games without a long ball since his 60th homer on Sept. 20. He walked in the first inning, flew to right in the second and grounded to third in the fourth in his previous at-bats before 37,008 at Rogers Centre.

He came to the plate again in the eighth, grounding into a force out with a hard smash to short.

Yankees pitcher Gerrit Cole (13-7) appeared determined to steal the spotlight. He had a perfect game through five innings with only two balls hit out of the infield. But he unravelled in the sixth inning, beginning with a leadoff homer from Danny Jansen.

Whit Merrifield followed with a single to centre, then moved to second after a Jackie Bradley Jr. walk. Merrifield advanced to third on George Springer’s sacrifice fly and scored on Bo Bichette’s infield hit.

Bradley and Bichette moved up a base when Cole balked, and Bradley scored on a sacrifice fly from Vladimir Guerrero Jr.

Blue Jays starter Mitch White lasted only 3 2/3 innings. He gave up three runs on five hits with three walks and a strikeout and has yet to win any of his eight starts for Toronto.

The Yankees opened with three runs in the first inning, benefiting from a pair of successive walks to leadoff hitter Judge and Oswaldo Cabrera.

Oswald Peraza then singled home Cabrera and Donaldson scored on a sacrifice fly to right from Marwin Gonzalez.

Gurriel, out since Sept. 7, hopes to test his leg with some base running on Friday. Espinal, who has missed seven games, worked on his stroke off a tee on Wednesday.

The Blue Jays have Thursday off before embarking on their final three-game set at home with the Boston Red Sox in town for a weekend series.

This report by The Canadian Press was first published Sept. 28, 2022.