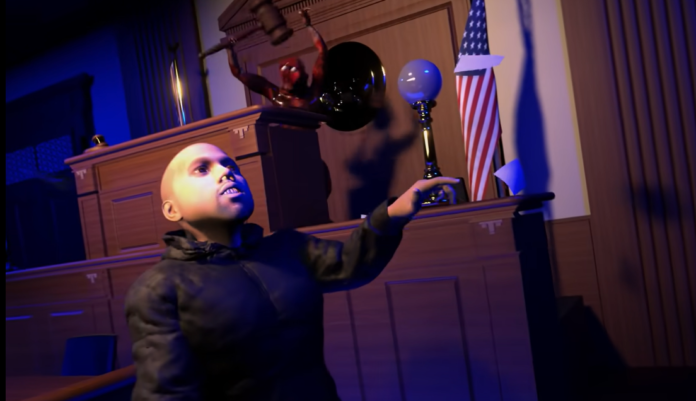 Much like the first music video he and The Game released for the song — a black-and-white, claymation style video that garnered widespread controversy over its depiction of SNL actor Pete Davidson being kidnapped, buried alive and seemingly decapitated — this new project sees the rappers targeting Davidson once again.

Of course, Davidson is the new boyfriend of West’s estranged wife, Kim Kardashian.

This new video, animated with stilted 3D models, shows a blurred-out Davidson being attacked by a skinned monkey, a symbol used as the cover art for the single.

The animated Davidson is wearing a red hoodie with the word “Skete” written on it, a nickname that West uses for the SNL star.

As the skinned monkey pins Davidson to the ground, throwing punch after punch, West raps in the background, “God saved me from that crash / Just so I can beat Pete Davidson’s ass.”

In the first Eazy video, a claymation West puts a burlap sack over Davidson’s head and ties him up. West then takes him, on the back of a motorcycle, to a field where he buries Davidson from the neck down before sprinkling rose seeds in the soil around him.

West returns after the flowers have bloomed and cuts them with garden shears. An extreme close-up shows Davidson’s eyes suddenly flashing white. Throughout the music video, there are continuous cuts back to West rapping and holding a decapitated head.

In a since-deleted Instagram post, West addressed the backlash to his first violent music video by writing “Art inspires and simplifies the world. Art is not a proxy for any ill or harm. Any suggestion otherwise about my art is false and mal [sic] intended.”

As of now, the only posts on West’s Instagram account are two poems, titled DEAD and DIVORCE. DEAD is written from the perspective of West as if he were deceased.

On March 2, Kardashian was declared legally single, though her divorce proceedings with West are still underway.

According to Rolling Stone, Kardashian argued before the court that terminating her marital status would better help her estranged husband to “accept that our marital relationship is over and to move forward on a better path which will assist us in peacefully co-parenting our children.”

Kardashian filed for divorce from West at the start of 2021 after being married to the rapper for almost seven years. She and West have four children together.

Kardashian became romantically linked to Davidson in October 2021, around the time she appeared as a guest host on SNL.

Eazy‘s lyrics make references to Kardashian and her family, including lyrics like “We havin’ the best divorce ever / If we go to court, we’ll go to court together / Matter of fact, pick up your sis, we’ll go to Kourt’s together.”

West also mentions their children in the lyrics: “When you give ’em everything, they only want more / Boujee and unruly, y’all need to do some chores / Rich-ass kids, this ain’t yo’ mama house.”

As of this writing, Davidson has not publicly commented on the videos.