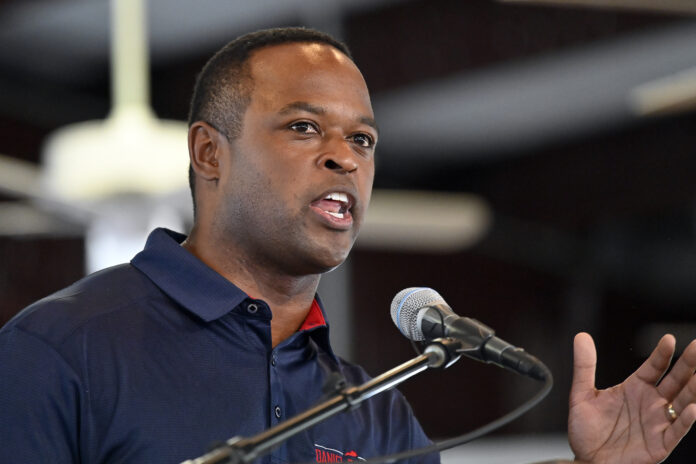 Kentucky Republicans came to the state’s premier political event this weekend intent on winning elections in November and beyond, but some candidates aspiring to become governor had a hard time coming to terms with Donald Trump‘s defeat in 2020.

They gave parsed or tortured responses when asked if Democrat Joe Biden‘s victory over Trump for the presidency was fairly decided. Their tiptoeing was a sign of Trump’s continued hold on many in the GOP, including in Kentucky, which he easily carried twice.

That influence was evident Saturday as Trump supporters held large “Trump Won” signs as people gathered for the political speaking at the Fancy Farm picnic in western Kentucky. The signs – promoting Trump’s false claims of a rigged 2020 election – drew cheers from Republican faithful. The stump-style speaking at the picnic – shown on statewide TV – is a rite of passage for statewide candidates in Kentucky.

The GOP gubernatorial hopefuls will face off for the party’s nomination next May.

Cameron pointed to the Trump endorsement during his picnic speech. But he bristled at questions during the weekend about the ex-president’s unsupported claims of widespread election fraud in 2020.

2:34Kansas vote upends predictions for the US midterm elections

Kansas vote upends predictions for the US midterm elections

“The election was fair and secure here in Kentucky,” Cameron said to one of the questions from reporters. “Look, we’ve got to focus on the future. And that’s what this campaign’s about.”

Cameron, however, distanced himself from the views of some die-hard Trump supporters, who believe the 2020 presidential election results should be overturned.

“President Biden is the president of the United States. I don’t dispute that,” said Cameron, who as attorney general has joined multiple lawsuits challenging Biden administration policies.

Federal and state election officials and Trump’s own attorney general have said there is no credible evidence the election was tainted. The former president’s allegations of fraud were also roundly rejected by courts, including by judges Trump appointed.

Cameron, who worked for Senate Minority Leader Mitch McConnell of Kentucky and counts him as a mentor, also refused to discuss the Jan. 6 insurrection at the U.S. Capitol. The House panel investigating the attack has laid the blame on Trump, saying the assault wasn’t spontaneous but an “attempted coup” and a direct result of the defeated president’s effort to overturn the election.

Instead of discussing the Capitol siege, Cameron pointed to 2020 demonstrations spurred by the deaths of George Floyd, Breonna Taylor and other Black Americans in encounters with police. He said he doesn’t get asked about protests that destroyed property in some of the nation’s cities.

Cameron, who is Black, even cracked a joke about the Trump endorsement in his picnic speech _ in true Fancy Farm form, where zingers and spoofs are not only common but expected.

“Now people have speculated about how I got that endorsement. So today I’m going to spill the beans. It was actually pretty easy. … All I had to do was assure Trump that Mitch McConnell is not Makenze’s grandfather,” Cameron quipped, referring to his wife.

Cameron was the only gubernatorial candidate to mention Trump, whose endorsement had been coveted by other GOP candidates for governor, from the Fancy Farm stage.

In her picnic speech, state Rep. Savannah Maddox, another gubernatorial candidate, mentioned Florida Gov. Ron DeSantis as an “authentic Republican” who will “fight for your constitutional rights and freedoms.”

Asked if he thinks Biden won fairly, Ryan Quarles replied that Kentucky had a “secure election” and that Trump “won tremendously” in the Bluegrass State. Quarles, the state agriculture commissioner, is also among the gubernatorial candidates seeking the GOP nomination to be decided next spring.

“I think that President Trump would be doing a lot better job than President Biden if he was in office today,” Quarles added.

Another gubernatorial hopeful, state Auditor Mike Harmon, gave a more than 140-word response when first asked if Biden won fairly. Harmon later said some key election-related “controls were taken off” but said he couldn’t “make an assessment one way or the other.”

Harmon said he wished there wasn’t an attack on the Capitol, but also pointed to the damage and destruction of property during police-related protests, saying there’s a lack of attention to that.

“Certainly, President Biden is serving as our president,” Harmon said later. “We need to pray for him just the same as we would pray for any of our presidents. And hopefully he provides guidance. There’s some things we wish he would do differently, obviously.”