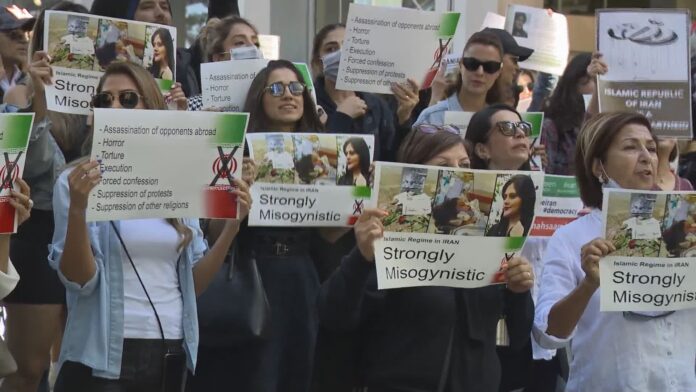 Scores of Iranian-Canadians and supporters rallied outside the U.S. consulate in Vancouver on Thursday in solidarity with demonstrators who have taken to the streets of the Middle-Eastern theocracy.

Protests and clashes with police in Iran have grown in number and intensity in recent days, as public anger mounts over the death of 22-year-old Mahsa Amini who died while in custody of the country’s morality police for wearing her hijab too loosely.

Demonstrations of support have also spread around the world, including Canada, where some women have taken to cutting their hair in solidarity.

On Thursday, the U.S. government announced sanctions against the morality police, but outside the consulate in Vancouver, demonstrators called for more action. Some held banners bore Amini’s photo and called for justice, amid chants of, “USA don’t support terrorists.”

“Right now in Iran, the Iranian guards are killing young people who came on the street and said enough is enough. We don’t want this regime. Women are burning their hijab because the hijab has been compulsory,” demonstrator Tahmineh Sadeghi told Global News.

“This regime has no respect for basic human rights.”

3:21The pursuit for answers in the downing of Ukraine Flight PS752

Sadeghi said she has friends who have been imprisoned for activity seen to defy the Islamic government’s rules, and that she herself had been laid off from jobs and questioned by Iranian police numerous times. Eventually, she said she had to leave the country for the sake of herself and her daughter.

Amini’s death in the regime’s custody should be the last straw, she said.

“When I saw Mahsa’s picture and heard the news it broke my heart. I couldn’t believe it — that a young innocent women, 22, who had a future in front of her, just died because of a few hairs,” she said.

“Mahsa was my daughter, Mahsa is me. Mahsa is all these people.”

Police in Iran claim Amini died of a heart attack and was not mistreated, but her family has cast doubt on that account. Independent experts affiliated with the United Nations said Thursday that reports suggested she was severely beaten by the morality police, without offering evidence.

At least nine people have died in clashes with police since Amini’s death, and the regime has implemented a widespread Internet blackout as it seeks to quell unrest.

On Wednesday, Canadian members of Parliament unanimously adopted a motion standing in “solidarity with the women of Iran who are fighting for their rights and freedoms.”

– With files from the Associated Press