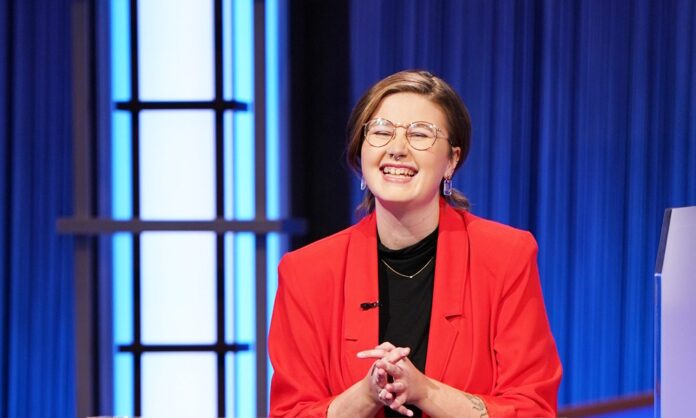 All good things must come to an end.

Canadian Jeopardy! champion Mattea Roach, whose whip-smart instincts and collection of blazers made their way across television screens and into the hearts of many, has ended her impressive 23-episode winning streak on the popular quiz show.

Roach lost Friday night’s episode by just $1. While she went into Final Jeopardy with a lead, she wagered $3,601 and did not respond correctly.

The clue was: “These two mayors gave their names to a facility built on the site of an old racetrack owned by Coca-Cola magnate Asa Candler.”

The correct answer was William Hartsfield and Maynard Jackson. Roach’s response? “Who are Churchill and Downs? idk.”

Danielle Maurer, a digital marketing manager from Georgia, guessed correctly, unseating Roach and finishing in first place with $15,600. Roach came in second with $15,599.

Roach, 23, is originally from Halifax but now works as a tutor in Toronto. She recently said on Twitter that she was “back in the homeland,” posting a photo of herself posing outside a grocery store in Cape Breton.

Why were 2 fugitives on a small plane that crashed in Ontario? The story so far

Mattea Roach makes it win No. 23 on Jeopardy!, but needed a big comeback

“It feels still kind of like a dream,” Roach said in a statement Friday.

Mattea Roach makes it win No. 23 on Jeopardy!, but needed a big comeback

“I really came down here hoping to maybe win one game and so I still can’t believe it. You know, it’s strange, obviously I didn’t come through in the last one, but I still feel so happy and so lucky to have had this experience.”

Roach has both the fifth-longest streak in the show’s history, along with the fifth-highest winnings during regular-season play, coming up short only to Jeopardy! legends Ken Jennings, Amy Schneider, Matt Amodio, and James Holzhauer.

Mattea Roach earns her 22nd Jeopardy! win — and a House of Commons shout-out

“When I think of the calibre of those four players, I really don’t feel like I deserve to be mentioned in the same breath as them, to be honest,” Roach said.

“And there’s a noticeable financial gap between my money and theirs, but it’s an amazing accomplishment. Like, I can’t believe it. It’s such a huge honor that I am being spoken of in relation to people like Ken, James, Matt, Amy. It’s, wow. There’s no words.”

While her streak on Jeopardy! has come to an end, this won’t be the last we’ll see of Roach. She will return to compete in the show’s tournament of champions in the fall.