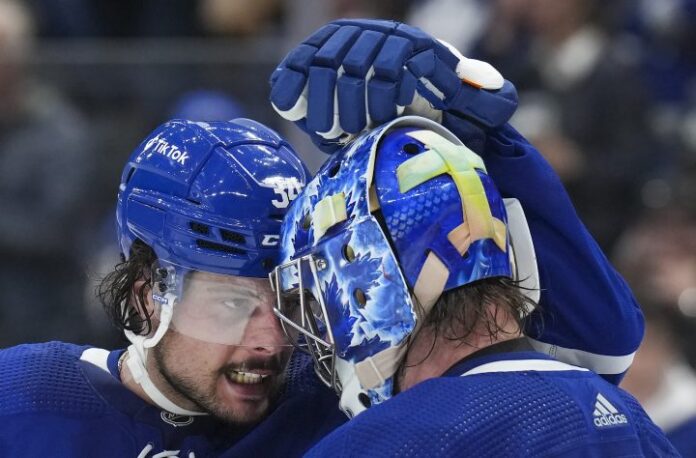 LAS VEGAS — With Saturday Night Live star Kenan Thompson making his second consecutive appearance as host, and joking that unlike the Oscars his audience should refrain from fighting, the National Hockey League Awards night was held in Las Vegas.

The Ted Lindsay Award, for the NHL’s most outstanding player during the regular season, went to Auston Matthews of the Toronto Maple Leafs, in part for his 60-goal season.

Matthews is one the best natural goal scorers in the game, he improved defensively and added more of a physical element to his game this season.

The other nominees were Connor McDavid of the Edmonton Oilers and Roman Josi of the Nashville Predators.

Earlier, the Calder Memorial Trophy, for rookie of the year, was presented to defenceman Moritz Seider of the Detroit Red Wings.

Seider had seven goals and 43 assists, the most points of any rookie defenceman this season. He played in all 82 Red Wings games this season, leading all rookies in total time on ice (1,889:22) and minutes per game (23:02).

The other nominees were forward Michael Bunting of the Toronto Maple Leafs and centre Trevor Zegras of the Anaheim Ducks.

The Vezina Trophy, for top goaltender, was presented to Igor Shesterkin of the New York Rangers.

Shesterkin posted an NHL-best 2.07 GAA and .935 save percentage, helping the Rangers (52-24-6) reach 110 points, the third-highest total in franchise history.

He recorded the seventh-best save percentage among all NHL goaltenders since the statistic was first officially recorded in 1955-56 (minimum 25 games played) and became the second Rangers netminder to top the save percentage chart, following Gump Worsley in 1957-58.

Jacob Markstrom of the Calgary Flames and Juuse Saras of the Nashville Predators were the other nominees.

— With files from The Associated Press.