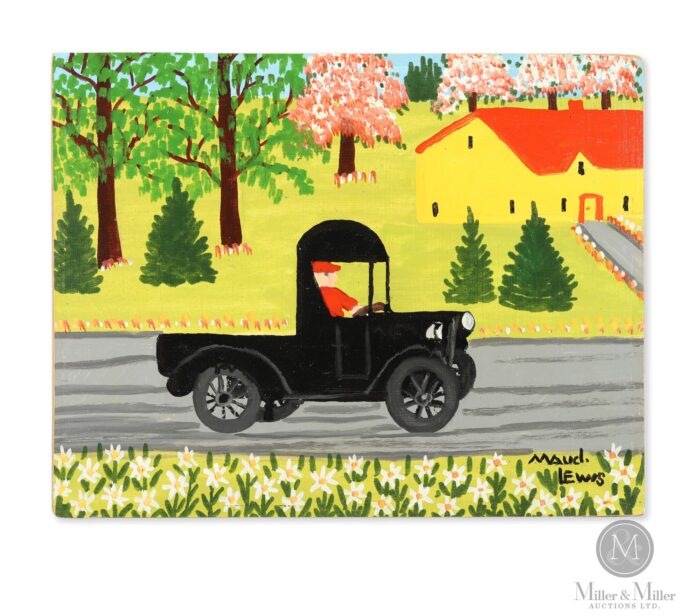 A painting by Nova Scotian folk artist Maud Lewis smashed a record selling price at an auction on Saturday.

The auction house described the artwork as “a springtime painting with daffodils in the foreground with blossoming cherry trees and a house filling much of the middle ground.”

Born in 1903, the artist suffered from a series of birth defects that left her shoulders hunched, chin pressed into her chest and her fingers painfully distorted.

According to The Canadian Encyclopedia, she spent most of her life in a cramped one-room house that had no running water or electricity.

Miller and Miller Auctions had recently sold another painting by Lewis for $75,000 in what had been the record before the Black Truck went for more than four times more.

How her painting arrived at the May 14, 2022, auction is also worth noting.

The Black Truck first belonged to Ontario artist John Kinnear, who passed away in 2003.

“Kinnear was the only artist to correspond with Maud Lewis from the time she became famous, in the mid-1960s, until her death in 1970,” read the auction listing.

“Kinnear would send Maud Lewis pre-primed Masonite boards, brushes, and requested paints. In return, Maud would send the finished paintings for Kinnear to sell and he would return the proceeds to Maud in Marshalltown.”

He lived in London, Ont., where he was a frequent guest at the former Villa restaurant on Richmond Street, now renamed Anthony’s Seafood Bistro, owned by Irene and Tony Demas.

In wanting art for the walls of their restaurant, the owners and Kinnear reached a deal to have his artwork be used as payment for meals. One day he came in with the Maud Lewis painting.

The painting remains one of Lewis’s rarest pieces of work.

Read the full story of how the Demas’ came to sell Lewis’ work here.