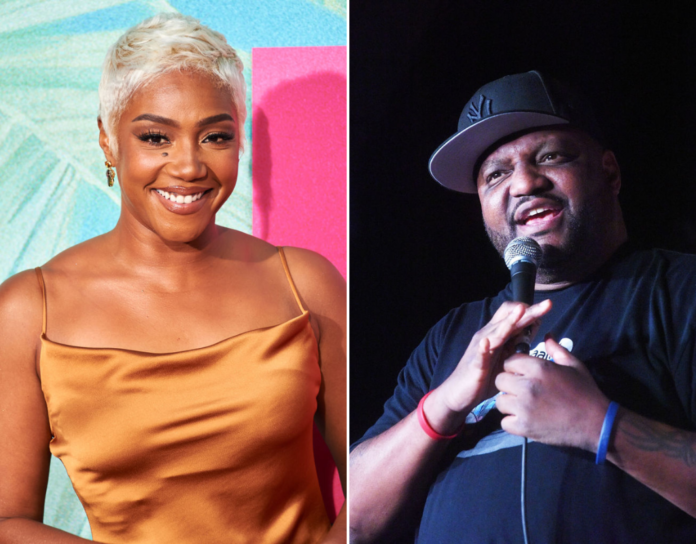 A woman who filed a lawsuit accusing comedians Tiffany Haddish and Aries Spears of grooming her and her brother when they were children and abusing them on camera for sexually explicit skits has filed a request to dismiss the claim.

The plaintiff requested that the U.S. District Court for Central California dismiss her lawsuit with prejudice, meaning it cannot be filed again. No reason was given for the withdrawal of the lawsuit.

In a statement, the woman, who was only identified as Jane Doe in court documents, said “we are glad that we can all put this behind us.”

“My family and I have known Tiffany Haddish for many years — and we now know that she would never harm me or my brother or help anyone else do anything that could harm us,” the statement reads.

Haddish, Spears and lawyers for either comedian have not commented publicly on the situation since the lawsuit request was submitted.

The lawsuit was originally filed on Aug. 30 in Los Angeles County Superior Court by Jane, 22, on behalf of herself and her brother, 14, who was identified as John Doe. The lawsuit claimed that Haddish and Spears had sexually abused the two siblings on camera for comedy skits, leaving them “traumatized for life.”

At the time of the alleged incidents, Jane was 14 and John was seven.

Just under a week after the lawsuit was filed, Haddish addressed the claims in a message posted to her Instagram, expressing regret for being involved.

“While the sketch was intended to be comedic, it wasn’t funny at all — and I deeply regret having agreed to act in it,” Haddish wrote.

According to the lawsuit, Haddish and Spears met the two siblings because their mother was friends with Haddish through the comedy circuit.

In 2013, Haddish allegedly asked Jane to act in a skit with her after the comedian appeared as a guest speaker at the comedy summer camp that Jane was attending. Haddish told Jane she had the “perfect role” for her, the lawsuit reads.

The next year, Haddish allegedly offered a role to Jane’s younger brother, telling the siblings’ mother that it would be “a sizzle reel for Nickelodeon,” to help the boy get cast by the TV network, the suit says.

The plaintiff’s mother asked Jane to chaperone the shoot but the siblings were told that they need to be “separate” for filming, the lawsuit claimed.

The lawsuit originally claimed that both Jane and John have developed social disorders as a result of the alleged abuse.

Lawyers for Haddish and Spears both individually dismissed the lawsuit at the time, characterizing it as a shakedown. Andrew Brettler, Haddish’s lawyer, claimed that the plaintiff’s mother has “been trying to assert these bogus claims against Ms. Haddish for several years.”

The lawyer called the claims “meritless” and said that Haddish had previously shown she “would not be shaken down.”

In a separate statement, Spears’ lawyer Debra Opri said the comedian wasn’t “going to fall for any shakedown.”