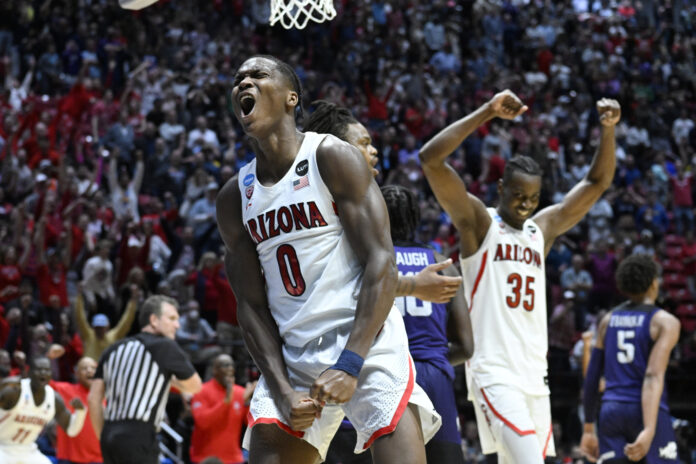 He may not be a household name yet, but a whole lot more Canadians are about get acquainted with 20-year-old Bennedict Mathurin.

The Montreal native regularly made crowds go wild while starring for the University of Arizona in NCAA Division I basketball for the the past  two seasons, and Thursday night he is a lock to be picked high in the NBA draft.

“I think top six, at the very least,” said Dwight Walton, a former member of Canada’s national basketball team who believes Mathurin will make an instant impact in the NBA. “His metrics are off the chart.”

Long before Mathurin was electrifying packed stadiums in college, he played on public courts in Montreal North, one of the city’s poorest neighbourhoods.

He got into the game because of his sister Jennifer, an elite basketball player in her own right who now coaches at Bishop’s University.

“I used to always take my brothers everywhere I went,” Jennifer told Global News from Brooklyn, where she will join her brother in the green room at the NBA Draft. “They even came with me to practice. Sometimes my coaches would let Benn practice with us, and he always came to take shots early, and after practice.”

She said she’s extremely proud of her brother, and gets goosebumps thinking of the moment his name will be called at the NBA Draft on Thursday night.

The game helped Mathurin and his sister cope with the loss of their brother, who died at the age of 15 in a bicycle accident. His death occurred a little under a decade ago, when Mathurin was only 12.

Mathurin chose to work even harder to honour his fallen sibling.

“I think it speaks volumes of his character and his resilience and his perseverance,” said Jenn.

Mathurin is set to make the ultimate leap, as more and more Canadians have been doing in recent years.

Ontario-born NBA stars like Andrew Wiggins and Jamal Murray are among those cementing Canada’s reputation as a basketball powerhouse, but Quebec has been catching up.

Chris Boucher, Lugentz Doort and are among the NBA players who grew up in Montreal North.

Mathurin says he hopes his story convinces other kids to believe in themselves even when nobody else does.

“Not a lot of people believed in me,” he told reporters during a recent press conference. “I remember me telling my teacher in high school I wanted to be NBA player and them asking my plan B and C and D as well.”

He said he plans to return to Montreal North to grow the game of basketball as much as he possibly can, and his community can’t wait.

“I feel like I’m able to do it because, you know, guys from here can do it,” said Cellou Bah, a young basketball fan practicing at Carignan Park in Montreal North, one of the courts once frequented by Mathurin.

He and many other in Montreal North will be watching eagerly to see which team picks one of the area’s newest sources of pride on Thursday night.