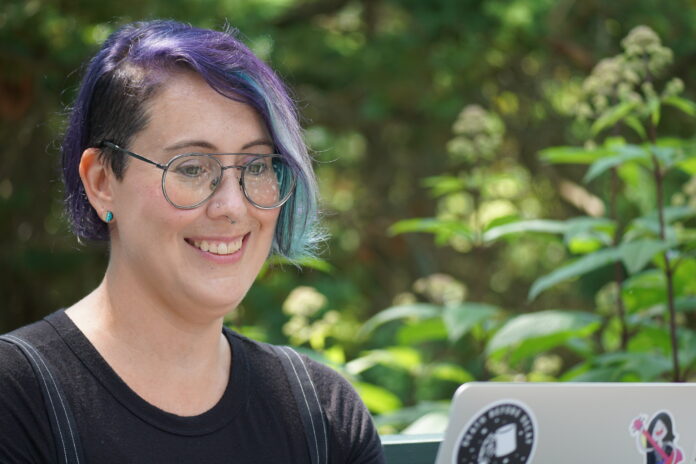 A Nova Scotia writer who lost their Twitter verification after changing their name to align with their gender identity says the situation has revealed gaps in the social media website’s policies.

‘Pronouns are lifesaving’: A look at the evolving language of pronouns and creating safe spaces

Sawler, who also works in marketing at a graphic novel publisher and ghostwrites for tech companies, had been verified on Twitter for several years under their former name.

“I couldn’t tell you the exact number — between five and seven (years), I’d say,” they said.

Nova Scotia author Sal Sawler came out as non-binary about a year ago.

In addition to getting a checkmark next to their handles, those with verified Twitter accounts can get some extra protections against things like harassment and account duplication.

It also grants people more visibility and credibility for their work — something that’s crucial for writers, Sawler said.

“So, if someone is looking for me online and wants to make sure they found the right children’s author, they know it’s me,” they said.

Sawler came out as non-binary about a year ago.

In July, they went public with their new name, Sal — which retains some of the elements of their former name, which still holds some meaning to them.

“I wanted something that was more gender-neutral, that was still fairly close to Sarah,” they said. Sawler gave permission for Global to use their former name, also known as a deadname, in this story.

“Sal is actually a derivative of Sarah. … I was like, ‘This is perfect, it’s not too far, it does what I want it to do.’”

On top of getting a blue checkmark next to their name, those who are verified on Twitter get extra protections against things like account duplication and harassment.

While it was not a legal name change, Sawler said it was still a complicated process.

“Changing my name was both easier and harder than I expected,” they said.

Most people were very accepting of their transition, Sawler said, but the author still had to deal with asking publications to retroactively change their byline to the correct name, changing their email addresses and rebuilding their brand.

“I don’t want people who get to know me as Sal Sawler to never know that I did all these other things,” they said.

“It’s a lot of work to even non-legally change your name. … This is just one more thing that makes it difficult to live as the person that I feel like I am.”

After changing their handle to @SalSawler last month, Sawler lost their Twitter verification. When they tried to reapply, they were told their handle didn’t have enough mentions to become verified.

“Of course, I didn’t, because I just changed it,” Sawler said.

“To be fair,” they noted, Twitter’s verification policy does state it can remove the blue badge at any time without notice, and changing one’s handle could lead to an account becoming unverified.

But Sawler said there are other valid reasons why someone might change their name — such as marriage and divorce — and there should be a better appeals process for people who have had their verification badges revoked.

“I would like to see them build something into their policies to make it possible for people to change their names without losing a verification that they’ve already been granted,” Sawler said.

“We need to start looking more at the big structural issues that make it difficult for people in marginalized groups of whatever kind to participate in all the same places, at the same level, as other people can.”

Niko Stratis, a culture writer based in Toronto, says being verified is especially important for people in jobs that require self-promotion and marketing.

As a trans woman who freelances for a living, she said the blue badge meant a career boost and more visibility for her work.

“Overnight, it was like, ‘Oh, you’re a legitimate person,’” she said,

But Stratis, in an interview from her home in Toronto, called the verification process “kind of arbitrary,” with no tangible metric of how Twitter decides who is and isn’t worthy of the blue badge.

“It feels like it’s kind of tied with this weird caste system that we left behind in high school,” she said, likening it to cliques sitting at different tables in the lunchroom.

“But (verification) does have this layer of legitimacy to it, especially if you work in media in any way, which a lot of us do. A lot of people who are verified do have media jobs, in one way or another.”

Stratis, who has gone through the arduous process of legally changing her name, has been verified on Twitter for more than a year. When she first applied for verification she was denied — but was approved shortly after changing one of her bylines to her legal name.

She said being verified is especially important for marginalized creators, as it adds another layer of protection against harassment.

“Especially for people that aren’t cishet white guys, for anybody that works in media … we face a lot of harassment on Twitter. And it’s easier to protect yourself from harassment if you’re a verified person,” she said.

What’s in a name?

Like Sawler, Stratis believes it should be easier for people who need to change their name to do so on Twitter, without losing their verification.

“You very much want to be reflected in the world around you and Twitter is a part of that.”

Stratis said this is one of “myriad ways” that “big tech leaves trans people behind.”

“There’s lots of trans people who work in tech, but they don’t work in positions where they can implement these changes,” she said. “There should be a transparent system to try to make this change, because it is important to people.”

Meanwhile, Sawler has no regrets about changing their name, even if it meant no more blue badge and the benefits that come with it.

“As I’ve built up my brand on social media, being authentic has always been a big part of what I put out there,” they said.

“And part of being authentic to me, is using a name that feels right … and Sal was that name.”

Sawler said they have another book coming out next fall, and once that’s published with their new name attached, they will reapply for verification.