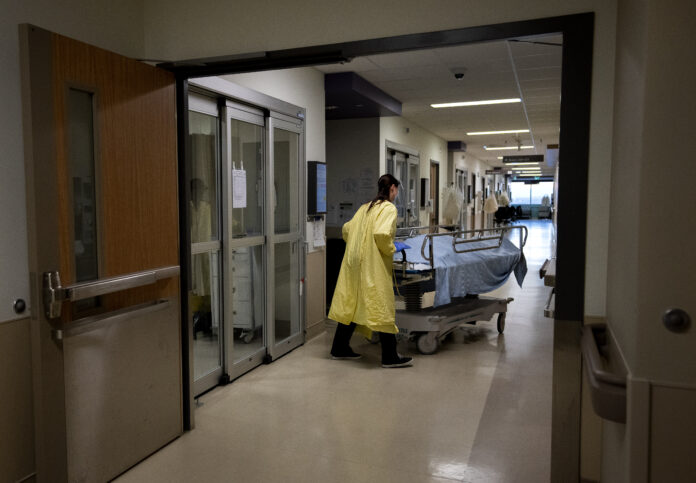 At least 40,000 people across Canada have died after contracting COVID-19 since the pandemic began more than two years ago, according to provincial data, and more than 70 people are still dying per day.

Yet hospitalizations and confirmed cases have fallen over the past two weeks, suggesting the sixth wave may be coming to an end.

As of Friday, 40,217 fatalities have been confirmed by provinces and territories to date.

Experts have previously said the true death toll could be thousands higher than the official count due to gaps in data collection, suggesting around two-thirds of all COVID-19-related deaths may have been missed.

Most provinces have shifted to reporting COVID-19 data weekly, a majority of which report on Thursdays. The official death toll surpassed 40,000 on May 12, while Ontario and Quebec — which still report daily — added another 48 deaths combined on Friday.

The seven-day average of new deaths has hovered around 70 for the past two weeks, plateauing from the near-record of 165 seen during the fifth wave early this year.

The dozens of new deaths per day comes despite signs the sixth wave is waning.

As of Friday, the seven-day average of daily lab-confirmed cases sits just above 4,630, down nearly 50 per cent from the rate seen a month ago.

The number of people in hospital currently sits at 5,664, according to the latest data, down more than 10 per cent from two weeks ago.

That includes 363 people being treated in intensive care units, a number that has also ticked downward after rising throughout April.

Canada’s chief public health officer Dr. Theresa Tam said on May 6 that cases appear to have plateaued in some provinces and are falling in others, though the number of people hospitalized with COVID-19 remains high in some parts of the country.

Bidding war no more: How to make an offer in Canada’s cooling housing market

Tam had warned nearly a month before that Canada was in the midst of a sixth wave, driven by the BA.2 subvariant of the highly transmissible Omicron variant.

The BA.2 subvariant is believed to be even more infectious than Omicron and is also leading to some reinfections of previous cases, according to Tam and other public health officials and experts.

COVID-19 symptoms linger for many 2 years after infection, study shows

Tam and her provincial counterparts have said the number of confirmed cases being reported are likely an undercount of the true number of cases, which could be up to 10 times higher. Many parts of the country no longer provide laboratory tests for a majority of people after capacity was overwhelmed by the spread of Omicron in late 2021.

At the same time, those officials have moved away from widespread mandates toward allowing Canadians to make decisions on how to protect themselves from the latest wave based on their own personal health, as well as the setting they are in and the amount of transmission in their community.

Most provinces and territories have loosened all or nearly all of the public health restrictions they had imposed to combat previous waves of the pandemic.

Tam warned on April 1 that the country is in a period of pandemic transition that might see further waves of COVID-19 cases this year.

“We anticipate that progress will not be linear, and there will likely be more bumps along the way, including resurgence in cases this spring, and likely also in the fall and winter,” she told a news briefing that day.

She said Canadians should keep wearing face coverings and ensure vaccinations are up to date amid rising case counts and reduced public health measures.

“I think the bottom line is everybody right now should still wear that mask and keep those layers of measures, no matter where you are in this country,” she said.

Health officials are continuing to remind Canadians that vaccinations, including boosters, are the only way through the pandemic.

Although 90 per cent of the eligible population aged five and over have received at least one vaccine dose, and 86 per cent are considered fully vaccinated with two doses, less than half of all Canadians have received a third dose.

Boosters are considered critical to help prevent serious illness from Omicron, which has been proven to be more resilient to existing vaccines.

Vaccine manufacturers like Pfizer and Moderna are developing a new generation of shots that will be designed to target more transmissible strains like Omicron.

— with files from the Canadian Press