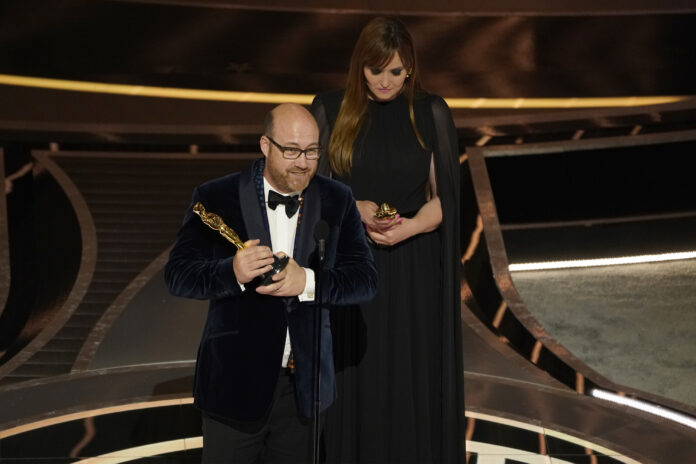 The Montreal director’s science fiction epic came into the ceremony with 10 nominations, only second to to Netflix’s The Power of the Dog, which earned 12.

Dune came away with six awards, mostly in technical categories. It was recognized for its production design, sound, cinematography, editing, original score and visual effects.

He thanked the big design team he worked alongside for Dune, calling them “great artists.”

“Denis, thank you for allowing us to dream,” Vermette said, addressing Villeneuve directly. “Thank you for being a great friend.”

Vermette also paid homage to the late Jean-Marc Vallée in his acceptance speech. They worked alongside one another in several productions, including Vallée’s breakout C.R.A.Z.Y from 2005.

The Canadian filmmaker and director, who was known for his high-profile movies and series, died suddenly in late December at his cabin outside Quebec City. Vallée was also included in the Oscars’ “in memoriam” segment.

In a phone call from the ceremony, Vermette told The Canadian Press that the win was a “dream come true.”

Villeneuve was nominated in the best adapted screenplay category, though the award was ultimately handed to CODA. He was also nominated for best picture alongside co-producers Mary Parent and Cale Boyter.

But Dune‘s director was repeatedly praised in acceptance speeches by those who took home hardware for the film. Cinematographer Greig Fraser and visual effects artist Paul Lambert also thanked Villeneuve for including them in his vision.

Donald Mowat, who hails from Montreal, was also up for an award for his role in the film for best makeup and hairstyling. The Eyes of Tammy Faye won the prize.

Aside from the sci-fi epic, The Power of the Dog also had a Quebecer producer up for an Oscar award. Roger Frappier, of Montreal, was nominated with Jane Campion and the team for best picture.

— with files from Global News’ Sarah Do Coutu, The Canadian Press and The Associated Press