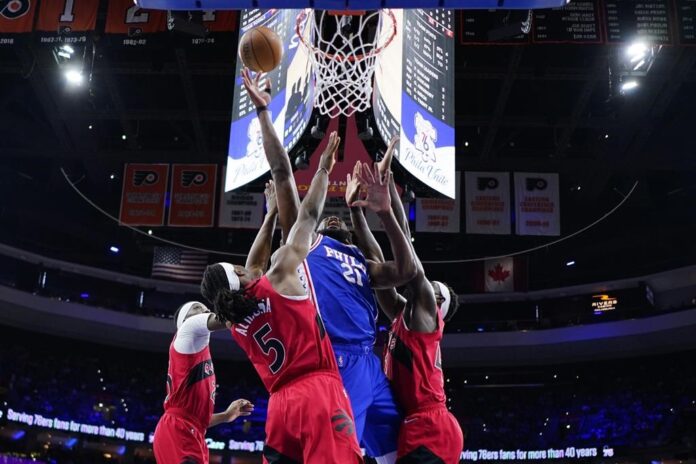 PHILADELPHIA (AP) — Pascal Siakam gave a pregame pep talk to keep the Raptors calm in a hostile Philly environment where they already lost twice and fell into a playoff hole.

The message was simple: “Listen to our voices.”

How do they like the sound of this? The resilient Raptors are headed home, still with a chance to pull off a series comeback that’s never happened in the NBA.

Siakam had 23 points and 10 rebounds, Precious Achiuwa scored 17 and the Toronto Raptors forced a return home for Game 6 in their Eastern Conference first-round series against Philadelphia, beating the 76ers 103-88 on Monday night.

“We always kind of figure it out,” Siakam said.

Yo, Canada! Once holding a 3-0 series lead, the 76ers are headed back north.

No team has ever blown a 3-0 advantage and lost a playoff series.

The Raptors have won two straight in the series and jumped all over injured Sixers center Joel Embiid and ineffective James Harden to make Thursday night’s game a necessity.

FanDuel Sportsbook has the Sixers favored by 1 1/2 points for Game 6.

Embiid had 20 points and 11 rebounds playing with a thumb injury. Harden scored 15 points on 4-of-11 shooting.

Rapper and famous 76ers fan Meek Mill pulled his hood over his head and walked off from his courtside seat late in the game and the home team down 14.

Sixers coach Doc Rivers is dragging the weight of ignominious NBA history with him through customs. Rivers, who led Boston to the 2008 championship, is the only coach in NBA history to blow three 3-1 series leads. The Magic lost to Detroit in the 2003 Eastern Conference first round; the 2015 Clippers blew the series to Houston in the Western Conference semifinals; and in 2020, the Clippers lost to Denver in the West semifinals.

The next season, Rivers was in Philly — and the Sixers lost three games at home as the No. 1 seed and were eliminated in the second round.

The nerves in Philly are suddenly as tight as the rims.

“We never brought the fight to them at the beginning of the game, really,” 76ers forward Tobias Harris said.

Judge holds Donald Trump in contempt for not complying with subpoena

The Sixers had a miserable first half. They finished with 10 turnovers and shot 35% from the floor. Philly’s last bucket in the first quarter was one for the blooper reel: Matisse Thybulle’s missed shot bounced off the rim and was accidentally tipped in by Achiuwa.

Maybe it sparked something for the Raptors. They opened the second quarter on a 12-0 run to take control all while the Sixers missed their first nine shots. The Sixers didn’t score until 6:51 was left in the half. Scottie Barnes scored eight points in the quarter and the Raptors took a 54-41 lead at the break.

“They were the tougher team all night, they were more physical all night,” Rivers said. “I don’t think it was the second quarter. I thought it was throughout the game.”

The 76ers were booed off the court, their play a bleak reminder of recent postseason flameouts.

“We’ve generated really good shots most of the series,” Raptors coach Nick Nurse said before the game. “We haven’t shot very well yet. I told the guys today, today would be a good day to go ahead and start making some of those open shots.”

The Raptors listened, hovering around 50% for most of the game. They also controlled the boards and scored 20 points off 16 turnovers.

Harden could have used the shooting tip.

Harden played the same night the All-Star he was traded for, Ben Simmons, was inactive for Brooklyn. Harden was barely more visible and missed 6 of 8 shots through three quarters, scoring nine points.

Embiid continued to play with a ligament tear in his right thumb. He looked gassed at times in the third quarter as the Raptors kept attacking the MVP finalist for tough buckets, notably Achiuwa’s driving layup that made it 73-60.

Embiid had his own rallying cry for the 76ers: Get back to the kind of play that earned them the 3-0 lead.

“It’s the same recipe. Don’t turn the ball over. Offensive rebound. We’ve definitely got to be better defensively,” he said. “There’s a reason we won three games in a row.”

OG Anunoby and Gary Trent Jr. each scored 16 points for the Raptors.

“Not exactly the way we would draw it up, but we’re happy to still be playing,” Nurse said.

Raptors: All-Star point guard Fred VanVleet sat out with a left hip flexor strain. VanVleet said he was hurt in Game 4 and was unsure if he could play in Game 6.

76ers: Embiid was fined $15,000 for criticizing the officiating in Game 4. … John Calipari, who coached 76ers guard Tyrese Maxey at Kentucky, was at the game.

Embiid will have to wait until after the season for thumb surgery.

Rivers has lost seven of his last eight opportunities to close out a series. His 31 losses in those games are already the most by a coach in NBA history.

The Sixers will play Game 6 without Thybulle. Thybulle, who sat out Games 3 and 4, is barred from entering Canada because he is not fully vaccinated against COVID-19.