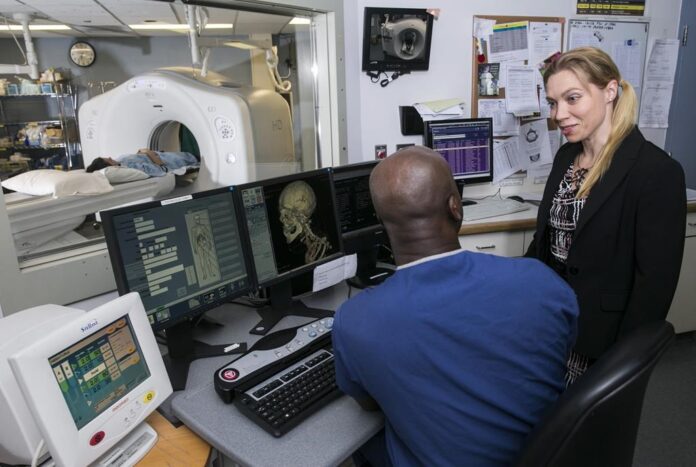 Ewa Hodges assumed no news was good news after she went for a routine mammogram, but she later was “devastated” to learn this was far from the truth.

The Toronto, Ont., resident found out a year after her screening in 2019 that she had early-stage breast cancer and needed a lumpectomy.

After her surgery, Hodges was told she should have follow-up scans at least every six months to ensure she remained cancer-free. But this was just as the COVID-19 pandemic was causing many cancellations of non-urgent health appointments.

Hodges became entangled in what she describes as a “frustrating” fight to advocate for her own health.

“I received a phone call from diagnostics that (a follow-up mammogram) was going to be postponed because I’m not considered a priority,” she told Global News.

“That’s how it started. I was calling … everybody was giving me the runaround.”

Two months later, her cancer was back and she needed a second lumpectomy.

“I was very lucky because if I had stage one or two or further (stages) I would have been probably dead,” Hodges said.

“I was angry, devastated, not understood. Because everybody was apologizing, including doctors, but nobody takes responsibility.”

1:59More than one-quarter of Nova Scotians learning of lung cancer diagnosis in the ER — when it’s often too late

More than one-quarter of Nova Scotians learning of lung cancer diagnosis in the ER — when it’s often too late – Jun 25, 2018

Hodges is just one of many Canadians that have been forced to wait longer for diagnoses because of major backlogs in diagnostic imaging across the country.

Prior to the pandemic, wait times for medical imaging were already high, with some patients waiting up to 89 days for an MRI and 82 days for a CT, according to the Canadian Association of Radiologists.

The situation has since become further exacerbated, thanks to increased imaging requests after two years of pandemic cancellations and postponements, making existing imaging backlogs even worse, says Dr. Ania Kielar, vice president of the Canadian Association of Radiologists.

Adding to these pressures is a growing shortage of radiologists in Canada, which means there is more work for a dwindling number of specialists, Kielar said.

“As we’ve heard in the news, with nursing shortages and health care shortages in general, we have the same issues in radiology right now,” Kielar said.

‘How the hell did this happen?’ More than 16,500 mammograms under review across N.L.

“There is increasing pressure to deliver efficient imaging, but with a limited number of people to do it, … the requests are just piling up.”

Heavy workloads and burnout have led some imaging technologists to retire early while the number of people entering the field of radiology has been declining in recent years, she said.

In Canada, 3.6 per cent of medical residency applicants chose diagnostic radiology as their first-choice specialty in 2022 compared with 4.5 per cent in 2010, according to data published by the Canadian Resident Matching Service (CARMS).

Kielar says Canada is experiencing staffing shortages “across the board” in diagnostic imaging, but in particular, there are shortages in mammography and pediatric radiology.

“Right now, I think most importantly, there is just such a backlog of patients who weren’t able to come in during COVID for screening mammography and screening cancer in general, that the workload has just gone above what we are able to manage.”

The end result is patients forced into a bottleneck, where they are forced to wait longer periods for the intel that comes from CT scans, mammograms and MRIs — information that is necessary to receive further treatment for some serious conditions, Kielar said.

“A surgeon can’t operate if they don’t know what they’re operating on. A cancer doctor can’t give more chemotherapy unless they know for sure that the therapy that they’re giving at this time is actually working,” she said.

“So by having to wait longer, the patients’ illnesses are sitting there untreated for longer, and this can cause negative outcomes for them in the long run and extend the period of time that they’re sick.”

In March, the federal government committed $2 billion to the provinces and territories to address medical backlogs that have resulted from the COVID-19 pandemic, including in diagnostics.

Kielar says this is a much-needed investment, but stressed the need for this to be equitably distributed to key areas of need across Canada and for transparency in how this money is being allocated.

In a statement to Global News, Health Canada says provinces and territories took a range of actions to increase health system capacity in the early days of the pandemic in anticipation of possible surges in demand for health services, including postponing some elective surgeries and medical procedures such as diagnostics.

“While provinces and territories continue to protect capacity for COVID-19 patients, most have resumed the majority of regular services and are making progress against the backlogs built up during the early weeks of the pandemic,” Health Canada said.

The federal health agency also pointed to $19 billion allocated under the ‘safe restart agreement’ with provinces to help them re-open their economies, and that some of this funding is “being used by some provinces/territories to address backlogs and reduce waits for care.” It further noted that training of diagnostic imaging technicians — as with the management of all health care professionals — is a provincial responsibility.

Specific questions about the $2-billion federal commitment from March — whether this money has yet been dispersed to the provinces and how much has been specifically allocated to address imaging delays — were not addressed by Health Canada in its statement.