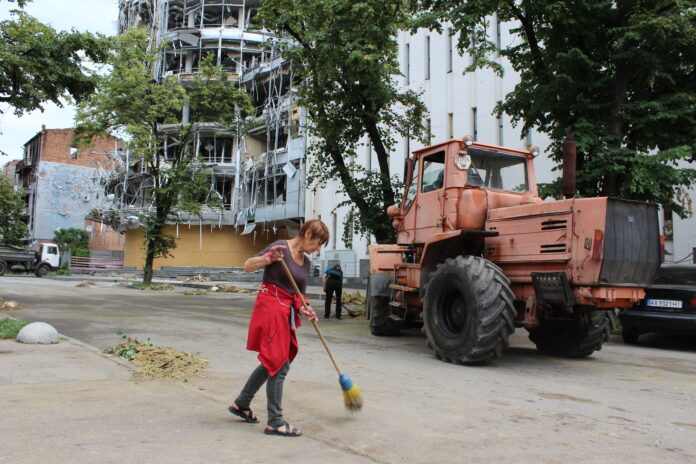 KHARKIV, Ukraine — Olga Bidenko was in bed asleep when an explosion shook her apartment building and the walls and ceiling collapsed on top of her.

Emergency workers dug her out and she sat on the sidewalk on Sunday morning, wincing as a friend used tweezers to remove fragments from her ankle.

Half the residential building was flattened in the attack, which police said was likely the result of a missile launched from Russian territory at 11 p.m. Saturday.

Russian forces have ramped up attacks in and around Kharkiv city in recent days, destroying buildings, killing and injuring civilians, and putting the city on edge.

The increased missile, rocket and artillery barrages are a step back for Ukraine’s second-biggest centre, which appeared to be returning to normalcy only a month ago.

Too old for army, Ukrainian partisan stole weapons from Russians

“The whole region of Kharkiv is under shelling,” said Oleksandr Volobuyev, head of the State Emergency Service of Kharkiv, after visiting the site of an attack Friday at a sports complex.

A missile also hit an apartment in Kyiv on Sunday morning, killing one person.

By attacking Kharkiv, Russia aims to stop the Ukrainian defence forces from advancing further toward the border, according to the Institute for the Study of War.

The Russians are also trying to protect positions east of Kharkiv used to support their attack on the southern Luhansk and Donetsk regions, collectively called the Donbas.

A friend cleans a wound Sunday from Olga Bidenko, right, who was injured in a missile attack in Kharkiv city on Saturday night.

A medical facility in Kharkiv was struck on Saturday night. Earlier in the day, a downtown office tower was hit. The athletic facility where Ukrainian Olympic athletes train was bombed on Friday.

Only non-military buildings have been hit in what the police chief said was an attempt by Russia to weary the population.

“Each night it’s repeating,” said Volodymyr Tymoshko, Chief of the National Police of Ukraine in the Kharkiv region. “What they are doing is for increased panic. They are only killing civilian people.”

Police, army and war crimes prosecutors were at the site of the apartment blast on Sunday. The attack injured two people and came minutes after missiles were fired from Belgorod, Russia, Tymoshko said.

Police chief Volodymyr Tymoshko, left, on Sunday at the scene of a Russian missile attack on a residential building, Kharkiv.

The uptick in long-range attacks has been met with a visibly more robust military presence on the streets and the construction of new military positions.

“What Russia is doing now in the Kharkiv region is a war crime,” regional governor Oleh Synyehubov wrote on Telegram. “This is real terrorism against the civilian population.”

He said the Russians had “no chance” of ever capturing Kharkiv and were targeting civilians after losing the battle for the city. “Russia will be held accountable for every crime on Ukrainian soil,” he said.

The Russian forces tried to capture Kharkiv at the outset of its Feb. 24 invasion but failed. After holding positions around the city, they were pushed back to a pocket along the border.

Throughout the war, Kharkiv has faced what Amnesty International has called a “relentless campaign of indiscriminate bombardments” by Russia.

“They shelled residential neighbourhoods almost daily, killing hundreds of civilians and causing wholesale destruction. Many of the attacks were carried out using widely banned cluster munitions,” the group said in a June 13 report.

An Azov training camp, near Kharkiv, Ukraine, on June 23.

With Kharkiv again in Russia’s sights, Ukrainians are preparing to defend the city.

In the rural grasslands outside Kharkiv, about 40 members of the Azov Regiment conducted weapons training on a recent afternoon.

“Today we will do two exercises,” their instructor announced before showing them how they would shoot their Kalashnikovs at targets 100 metres away while remaining constantly on the move.

The group then split up and half the camouflage-clad trainees walked to a nearby valley to practise firing rocket-propelled grenade launchers into a sandy hillside.

Known for its attempt to defend Mariupol, Azov is a paramilitary group formed in 2014 to fight Russian forces in Ukraine’s Donbas. It works in coordination with the Armed Forces of Ukraine.

“We are ready to do everything that is needed to stop them,” said an Azov spokesperson, who identified himself only as Gor. “We aren’t giving them a metre of our motherland.”

School director Oleksandr Gryanik looks out the window of a bomb-damaged school in Kharkiv, Ukraine, on June 22.

Even before the recent surge in attacks, swaths of Kharkiv were already heavily damaged.

School director Oleksandr Gryanik walked through the halls of his Grade 5 to 11 institution, showing reporters the gaping holes in the roof, shattered windows and craters in the yard.

Unscathed by the rockets was the room that pays tribute to Ukrainian culture with its display of clothing, dried flowers and crafts.

“This is the place where our kids have the strongest feeling that they are Ukrainian,” he said. “And this is the one room that is totally untouched.”

He said the room would inspire the post-war reconstruction of the school.

“They think school is the beginning of nationalism,” he said of the Russians. “And it’s true. It’s the building where we provide knowledge to love our country.”