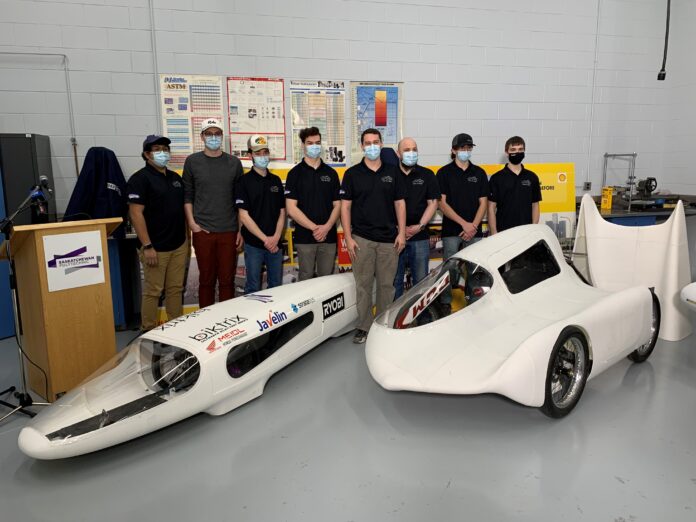 Some students from Saskatchewan Polytechnic are hoping to attain gold on the world stage.

The school’s design and manufacturing engineering technology students want to beat their previous standard set by a 2018 crew who came in second place at the Shell Eco-Marathon mini event and finished again in second place during a global race.

This year is the 35th Shell Eco-Marathon and the pressure is mounting for the students.

The event is a series of international races which decide who has some of the most fuel-efficient vehicles on the globe.

One of the students in the program who helped build this years’ vehicles, Linden Herperger said, “We’ve heard all the stories of 2018 and 2017 and all of the heritage so we’re excited to go hopefully create some legacy of our own.”

The event gets students together from across the globe to design, build and operate some of the world’s most energy-efficient vehicles.

One is their first ever electric-powered vehicle, and the other is a new and improved version of their last model with an internal combustion motor.

The new model is estimated to get 1,000 miles per gallon, but since they have not tested it beforehand, they have no idea what speed and distance the cars are capable of reaching.

“That’s what we’re going to find out in a couple days time,” said Herperger.

With the help of a 3D printer, the program has only taken one semester to create them both.

They even found a way to add some Canadian culture to the design by making some of the framework out of old hockey sticks.

“It’s really the ability to recycle something that’s normally not recyclable,” said Minch.

When Global News asked what this years’ team’s goal is for the marathon Herperger said, “Well I mean, obviously, let’s go win it all.”

Saskatchewan Polytech crew heads to Indianapolis, Indiana Apr. 10-13- for the first mini event of the season.

Eco-efficient vehicles from other countries will be racing all over the world until the end of the year.