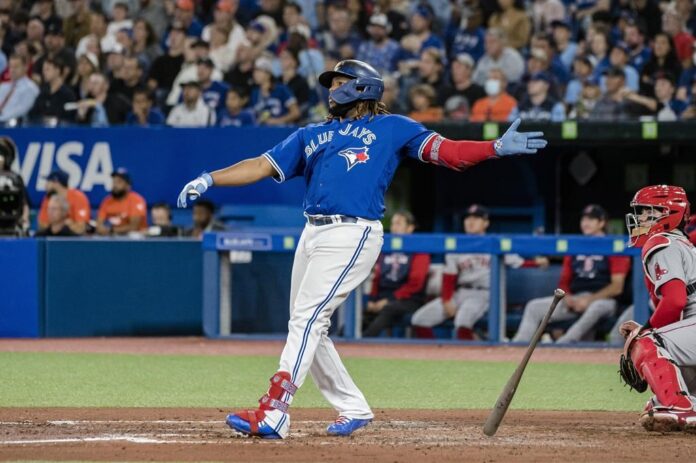 TORONTO – George Springer had a three-run homer as part of a four-run inning as the Toronto Blue Jays routed the Boston Red Sox 9-0 on Friday.

Raimel Tapia had a solo home run to lead off the sixth inning for Toronto (88-69), after Vladimir Guerrero Jr. had a two-run shot in the third.

Bo Bichette had two hits, driving in one run, to reach 48 hits in the month of September to set a new Blue Jays record.

Toronto locked up a playoff spot Thursday afternoon when the Baltimore Orioles lost to Boston 5-3. That defeat eliminated Baltimore from the playoffs and guaranteed Toronto a post-season appearance but the Blue Jays had Thursday off, meaning they couldn’t celebrate as a team.

Toronto interim manager John Schneider said before Friday’s win that his team intended to celebrate clinching a post-season berth, regardless of Friday’s result.

“I think whenever you have a chance to do that you have to embrace it. You have to not ignore it,” said Schneider before Friday’s game. “That doesn’t happen all the time and I can’t wait to have a good time with that group.”

The Blue Jays have five more regular-season games with Toronto still vying for home-field advantage in the American League wild card series. After the three-game set against Boston, the Blue Jays will travel to Baltimore to close out the regular season.

“All the hard work paid off, we put a lot in and we had high expectations of ourselves and we were able to accomplish it,” said Bichette before the game. “There’s still more work to do, obviously, and we expect more but we definitely need to enjoy this.”

Catcher Alejandro Kirk opened the scoring for Toronto in the first inning on Friday when his groundout to second baseman Christian Arroyo gave Springer enough time to score.

Second baseman Whit Merrifield made it 2-0 in the second with his sacrifice fly to deep right field cashing in Tapia.

Guerrero piled on in the third, sailing an 86.4 m.p.h. change-up from Pivetta into the second deck at Rogers Centre to the delight of the 37,283 in attendance. Guerrero’s 31st home run of the season also scored Bichette for a 4-0 Toronto lead.

Manoah’s no-hit bid ended in the fifth when Abraham Almonte singled up the first-base line. Guerrero fielded the hit and tossed it underhand to Manoah, who didn’t reach the base in time or make the catch as he apparently thought it had gone foul.

The Blue Jays’ bats kept doing damage in the sixth.

Tapia tacked on another run, batting leadoff in the inning. He launched an 82.6 m.p.h. curveball from Danish to deep right field. It was his seventh homer of the season and gave the Blue Jays a 5-0 lead.

Back-to-back singles by Danny Jansen and Merrifield put two runners on and brought Springer to the plate. He smashed a 90.7 m.p.h. fastball to left field for his 25th homer of the season. That gave Toronto an 8-0 lead before Boston could even record an out in the sixth inning.

Bichette set the Blue Jays record for most hits in a month in the eighth when he singled to right field. That scored Merrifield for another Toronto run

ORANGE SHIRT DAY — The Blue Jays honoured the National Day for Truth and Reconciliation before and during the game. The Canadian national anthem was sung in English, French, and Blackfoot and Dolores (McLeod) Naponse, a residential school survivor from Atikameksheng Anishnawbek, near Sudbury Ont., threw out the ceremonial first pitch.

ON DECK — Ross Stripling (9-4) will get the start on Saturday afternoon as Toronto continues its three-game series against Boston. Brayan Bello (2-7) will take the mound for the Red Sox.

This report by The Canadian Press was first published Sept. 30, 2022.