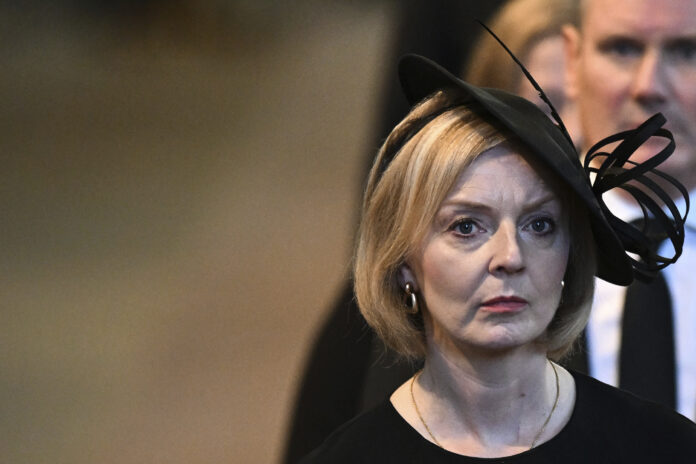 British politics returns to centre stage on Tuesday after the funeral of Queen Elizabeth, with Prime Minister Liz Truss signalling her priorities by flying to her first major summit and rushing out measures to try to avert an economic slump.

Since the queen’s death on Sept. 8, politics — or at least the discussion of its ins and outs — has been on pause for a period of national mourning, out of respect for a monarch who reigned for 70 years.

The timing of the political pause — which began just two days after Truss was sworn in as prime minister — was frustrating for some in government, coming after a two-month leadership campaign and when Britain risks falling into a lengthy recession and faces an energy crisis that threatens the finances of millions.

But it has, according to sources, allowed some of Truss’s ministers time to get established in their new departments and fine tune their policies. It just makes for a busy week ahead.

New policies will be crammed in during the few days at the end of the week in parliament, which government hopes will sit for an additional day on Friday before breaking up for the annual season of party conferences.

They will include a support package to help businesses cope with rising energy prices, a statement on possibly cutting waiting times for treatment at Britain’s state-run National Health Service and much promised tax cuts to try to spur growth.

She will also meet U.S. President Joe Biden at the U.N. General Assembly on Wednesday after meeting several leaders who had travelled to take part in the queen’s funeral, which saw a congregation of 2,000 pay their final respects.

“I think we will see a focused, punchy start, showing momentum and direction of travel free of distractions and side dramas,” said a veteran member of the governing Conservative Party. “The policies were there already, but they were bedded into the departments (during the mourning period).”

3:13Queen Elizabeth death: PM Truss pays tribute to late monarch as ‘the rock on which modern Britain was built’

Queen Elizabeth death: PM Truss pays tribute to late monarch as ‘the rock on which modern Britain was built’ – Sep 8, 2022

On her second full day in office, Truss made a big announcement about measures to ease the pain of sky-high energy prices. But this was eclipsed by the news hours later that the queen had died.

The new prime minister had to change gear immediately, concentrating on striking the right tone in speeches and tributes to the queen, while keeping some distance to allow the royal family to take the lead. For some in her governing Conservative Party, the pause softened any criticism of her first, expensive moves.

Queen Elizabeth funeral: The ceremony and where to watch it

And while her spokespeople were diligent in declining to make announcements during the national mourning period, her government pressed on with its work, with one source saying her ministers were in the finance ministry even on Sunday.

Other institutions also pared back their public-facing work, with Britain’s financial industry cancelling events and postponing meetings during mourning, which culminated in a public holiday on Monday — something that could reduce economic output by 0.2 percentage points this month.

Truss’s overriding mantra for what she wants to achieve in government is “growth”, in the belief that by raising the rate of economic growth she can solve many other long-standing issues.

That will come in her fiscal statement, or mini budget, expected to be delivered by her finance minister, Kwasi Kwarteng, on Friday when he will scrap an increase in national insurance contributions and freeze corporation tax.

Kwarteng will also give an estimated cost for the energy package, but it will be up to the business department to offer the detail. He may also announce the end to caps on bankers’ bonuses, but last week no decisions had been taken.

On Thursday, the Bank of England is set to raise interest rates to fight inflation, seemingly moving in an opposing direction to Kwarteng whose tax cuts could stoke prices.

Her team has made clear that she does not want the “distractions” that buffeted the tenure of her predecessor Boris Johnson, who was ultimately forced out by his own party after months of missteps and scandal.

Kwarteng’s decision to sack the top official at the finance ministry caused some consternation, but was largely overshadowed by the queen’s death.

But while there will be much focus in parliament on tackling domestic issues, Truss’s first port of call will be New York.

There she will attend the annual U.N. gathering of world leaders and take the opportunity to have what Downing Street has described as a “full bilateral meeting” with Biden instead of an informal meeting in London on the sidelines of the funeral.

Britain has long hailed the so-called special relationship with the United States, but ties have been tested, particularly over Brexit and Truss’s decision to introduce legislation to unilaterally change an agreement on post-Brexit trade with Northern Ireland.

Biden has long made his concerns known about the future of Northern Ireland, but the two will find more common ground in their strong stance against Russia and China. While foreign minister, Truss described the relationship as “special, but not exclusive”.

For a woman who said she would be ready to govern from day one, she has set herself a tough agenda.