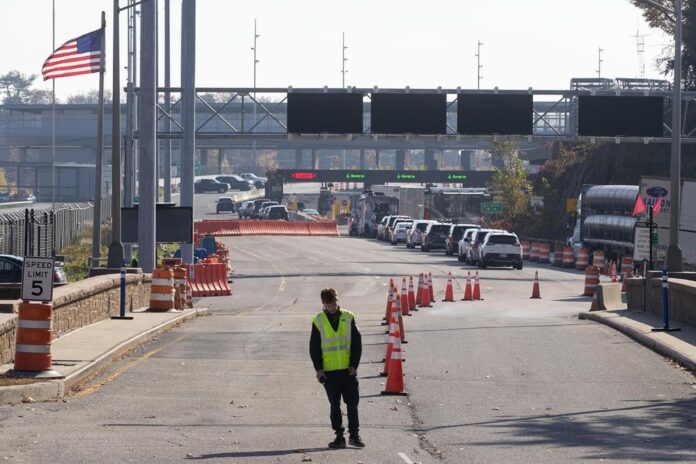 Lawmakers from the northern United States are cheering reports that Canada is poised to abandon COVID-19 vaccination rules for foreign visitors, and want President Joe Biden’s administration to follow suit.

Montana Sen. Jon Tester, a Democrat, wrote to Homeland Security Secretary Alejandro Mayorkas this week to urge him to lift the vaccine requirement for truck drivers and other travellers entering the U.S.

“Recent reports indicate that the Canadian government is planning to terminate its vaccination requirements for Americans and other non-citizens entering the country in the coming days,” Tester wrote.

“It is past time for America to do the same.”

Vaccine mandates at the border are making international trade “harder and more expensive,” particularly in states like Montana that enjoy a special trading relationship with their northern neighbours, he continued.

“Fertilizer, hay and other agricultural products from Canada are critical for farmers and ranchers in Montana and across America,” Tester wrote.

A co-ordinated approach to reciprocal measures, he said, would “prevent unnecessary confusion, increase trade and boost economies on both sides of the northern border.”

New York congressman Rep. Brian Higgins, co-chair of the multipartisan, bilateral Canada-U.S. Inter-Parliamentary Group, said the question of vaccination rules at the border was a hot topic during recent meetings in D.C.

Higgins said it would defy logic for the U.S. to maintain its vaccine mandate for foreign travellers in light of Biden’s own claim in a recent “60 Minutes” interview that “the pandemic is over.”

“I don’t know if I agree with that entirely,” he said of Biden’s remarks. “But the extent to which I do agree with it is that all pandemic restrictions should be lifted. People have had enough.”

Two senior government sources aware of Canada’s decision confirmed Thursday that the cabinet order maintaining COVID-19 border measures will not be renewed when it expires on Sept. 30.

The sources spoke to The Canadian Press on the condition they not be named because they were not authorized to speak publicly.

The expiry also spells the end of requiring travellers to use the ArriveCan app to input vaccination records and test results, though the app will live on as an optional tool for customs and immigration.

One of the sources said Prime Minister Justin Trudeau has signed off on the decision not to renew the order.

As a result, international travellers will no longer have to prove they are fully vaccinated to enter Canada. Unvaccinated Canadians must show a negative test result to get in, agree to quarantine for 14 days and undergo further testing after arrival.

Trudeau was asked about the changes to the border rules on Wednesday and Friday, but both times the prime minister did not confirm any decision had been made.

White House officials have so far refused to say whether U.S. vaccine rules for foreign travellers will change at the end of the month. The Centers for Disease Control and Prevention did not respond to media queries on Friday.

Asymmetrical travel restrictions along the Canada-U.S. land border have been a regular frustration over the course of the COVID-19 pandemic, most notably last fall when the U.S. opened the door to vaccinated foreigners nearly three months after Canada did.

Higgins said he’s well aware of the dysfunction and wants the Inter-Parliamentary Group to turn its focus towards finding a way to ensure the U.S. and Canada can make their border policies more symmetrical.

“In North America — and in particular, between the United States and Canada — we are surrounded by friends and fish. And I just think that, you know, that has to account for something.”

Canada’s tourism industry has bemoaned the uncoordinated approach Canada and the U.S. have taken at the border as well.

In a report commissioned by the Tourism Industry Association Canada and the Canadian Travel and Tourism Roundtable, several prominent Canadian epidemiologists called for an end to restrictions that single out cross-border travellers.

“Travel restrictions implemented worldwide cannot maintain a COVID-19-free environment, nor prevent new (variants of concern) from entering a country, or prevent it from being spread within communities,” the four doctors concluded.

And Canadian travellers are a fairly low-risk lot, considering more than 87 per cent of people living north of the border have received at least one dose of a COVID-19 vaccine.

“We’re one of the most highly vaccinated populations in the world,” Dr. Karl Weiss, chief of the infectious disease division at the McGill Centre for Viral Diseases, told a news conference Friday.

“I think at this stage, with the tools we have, we’ve reached that point.”

—With files from Laura Osman in Ottawa and Global News