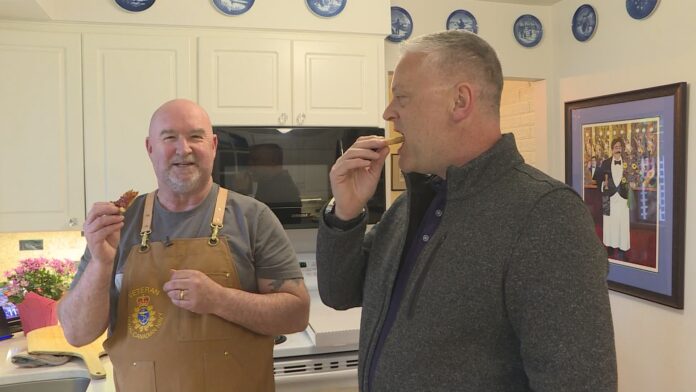 How far would you go for a taste of your youth — and how much would you be willing to spend.

The taste they were seeking? Pizza from Windsor, Ont., a regional specialty known for several distinctive qualities.

‘Pizza groundhog’ enjoys a slice outside home under coronavirus lockdown

“Some of the unique features are that they use canned mushrooms, which for most pizzerias are a real taboo, they want fresh everything,” explained pizza aficionado and transit worker John Palmer.

“Another unique feature is they shred peperoni instead of the round disks, that way you’re guaranteed to get a mouthful of peperoni every bite. And the cheese is different as well, it’s made locally … and it gives it a very unique flavour.

“Of course the biggest variable is that its from my childhood, so of course it’s going to have a fond place on my taste buds.”

Palmer grew up in Windsor, leaving at age 17 to join the military. His colleague Nigel Couch emigrated to Canada in 2005, and Windsor was his first stop.

When the pair met at work, they bonded over the famous pie.

“We started immediately making a connection over Windsor pizza. For years we talked about trying to get Windsor pizza out here, but the logistics were just really challenging,” Palmer explained.

This week, the duo realized that long-running dream, and had Windsor pizzas — 10 of them in total — delivered from the Southern Ontario city to British Columbia’s capital, at no small expense.

Mattea Roach’s record-breaking Jeopardy! run is over after losing by $1

4:19Pass the Pizza: A healthy twist for pizza night

It wasn’t easy. Palmer said he had to phone numerous pizza shops to find one that would do the deal over the phone.

Eventually, he found Antoninos Original Pizza, where he said staff went above and beyond — agreeing to half-bake, then freeze the pies, and even coordinate with UPS to get them shipped.

To make it happen, Palmer had to look up an old friend he hadn’t spoken to for years in Windsor get them from the pizza shop to the courier.

On Thursday, the work paid off and the pies arrived and the pizza partners divvied up the spoils.

Palmer invited his father and sister-in-law over, all former Windsorites, and the group chowed down and reminisced.

“We talked about Windsor, remembered our time there and old friends … as well we shared some darned good pizza,” he said.

“So it was really, really worth it for me.”

Couch, who took four of the pies home, said he is guarding them jealously.

“The problem for me is I have to share it with two grown boys,” he said.

“Normally John and I share food with colleagues at work but this isn’t going anywhere near work.”

While delivering pizzas nearly 4,000 kilometres may sound extreme, it’s not out of the ordinary for Windsor pizzerias.

People seeking a taste of home have been known to have them shipped across Canada and the U.S., while Antoninos said it’s even accommodated an order from someone in Dubai.

Despite the cost, both Palmer and Couch said they wouldn’t hesitate to place another order, that is after they’ve replenished their current pizza stash.

“I think I’d have to speak to my wife about how much we’re going to pay for it,” Couch joked, adding that the purchase was “worth every penny.”

“It’s like opening a bottle of fine wine,” Palmer added.

“I would not suggest to you it was cost effective to have it shipped from Windsor, this was more of an emotional decision.”