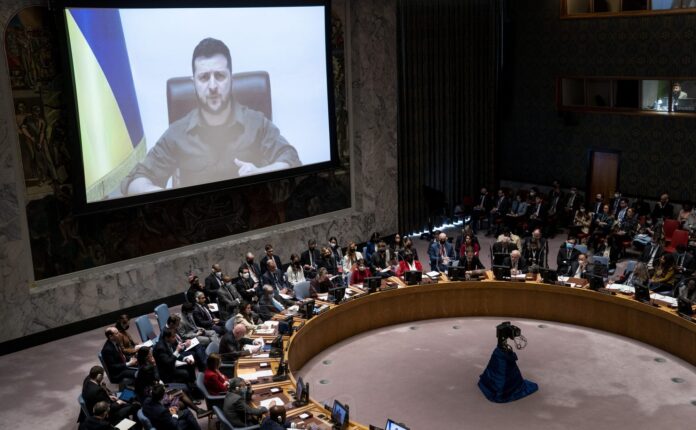 Ukrainian President Volodymyr Zelenskyy told the United Nations Security Council on Tuesday that “accountability must be inevitable” for Russia as he accused invading Russian troops of committing “the most terrible war crimes” since World War Two.

Zelenskyy showed a short video of burned, bloodied and mutilated bodies, including children, in Irpin, Dymerka, Mariupol and Bucha, where Ukraine accuses Russian troops of killing hundreds of civilians.

Zelenskyy, appearing via video from Ukraine, said that civilians had been tortured, shot in the back of the head, thrown down wells, blown up with grenades in their apartments and crushed to death by tanks while in cars.

“They cut off limbs, cut their throats. Women were raped and killed in front of their children. Their tongues were pulled out only because their aggressor did not hear what they wanted to hear from them,” he said, recounting what he described as the worst atrocities since World War II.

Over the past few days, grisly images of what appeared to be civilian massacres carried out by Russian forces in Bucha before they withdrew from the outskirts of Kyiv have caused a global outcry and led Western nations to expel scores of Moscow’s diplomats and propose further sanctions, including a ban on coal imports from Russia.

Zelenskyy said that both those who carried out the killings and those who gave the orders “must be brought to justice immediately for war crimes” in front of a tribunal similar to what was used in postwar Germany.

Russia’s U.N. Ambassador Vassily Nebenzia then told the Security Council that Russian troops are not targeting civilians, dismissing accusations of abuse as lies. He said that while Bucha was under Russian control “not a single civilian suffered from any kind of violence.”

Dozens of bodies wait to be buried at a cemetery in Bucha, outskirts of Kyiv, Ukraine, Tuesday, April 5, 2022. Ukraineâ€™s president told the U.N. Security Council on Tuesday that the Russian military must be brought to justice immediately for war crimes, accusing invading troops of the worst atrocities since World War II. He stressed that Bucha was only one place and there are more with similar horrors. (AP Photo/Felipe Dana).

Images from devastation in Ukraine are displayed during a meeting of the UN Security Council, Tuesday, April 5, 2022, at United Nations headquarters. Ukrainian President Volodymyr Zelenskyy addressed the U.N. Security Council for the first time Tuesday at a meeting focused on what appears to be widespread deliberate killings of civilians by Russian troops. Videos of streets in the town of Bucha outside Kyiv strewn with corpses have sparked global outrage and vehement denials from the Russian government that it was responsible. (AP Photo/John Minchillo).

Zelenskyy questioned the value of the 15-member U.N. Security Council, which has been unable to take any action over Russia’s Feb. 24 invasion of Ukraine because Moscow is a veto power, along with fellow permanent council members the United States, France, Britain and China.

“We are dealing with a state that turns its veto at the U.N. Security Council into the right to (cause) death,” Zelenskyy said, urging reform of the world body. “Russia wants to turn Ukraine into silent slaves.”

1:47Zelenskyy slams UNSC for inactivity on the Russian invasion of Ukraine: ‘Where is the security?’

Zelenskyy slams UNSC for inactivity on the Russian invasion of Ukraine: ‘Where is the security?’

Russia says it is carrying out a “special military operation” that aims to destroy Ukraine’s military infrastructure and “denazify” it, and denies attacking civilians. Ukraine, a parliamentary democracy, and Western countries say Moscow invaded without provocation.

Russia’s partner China, which has abstained on most U.N. votes since the war started, was “deeply disturbed” by the images of civilian deaths in Bucha, China’s U.N. Ambassador Zhang Jun said, calling for verification of what happened.

India, which relies heavily on Russia for military hardware and has also abstained on U.N. action, condemned the killings in Bucha and called for an independent investigation.

Russia’s Nebenzia said: “We are not shooting against the civilian targets in order to save as many as civilians possible. This is precisely why we’re not advancing as fast as many expected.”

The U.S. ambassador to the United Nations, Linda Thomas-Greenfield, said responsible world powers and global leaders need to “show backbone — and stand up to Russia’s dangerous and unprovoked threat against Ukraine and the world.”

“No one can be a shield for Russia’s aggression,” she said as Washington pushes to suspend Russia from the Geneva-based U.N. Human Rights Council.

The 193-member U.N. General Assembly in New York is likely to vote on the move to suspend Russia on Thursday, diplomats said. A two-thirds majority of present voting members is needed.

Nebenzia responded: “I hope that our colleagues from the United Nations will not allow themselves to be manipulated and play up to Washington.”

The United Nations said some 11 million Ukrainians — more than a quarter of the population — have fled their homes. More than 4 million of those people have left Ukraine.

U.N. aid chief Martin Griffiths said at least 1,430 civilians have been killed, including more than 121 children. “We know this is likely a serious underestimate,” he added.

Griffiths, who is seeking a humanitarian truce in Ukraine, said “we have a long road ahead of us” after what he described as a “frank” meeting with Russia’s Foreign Minister Sergei Lavrov in Moscow on Monday. Griffiths said he hopes to travel to Ukraine on Wednesday to meet with Ukrainian officials.

“These include gang rape and rapes in front of children,” she said. “There are also claims of sexual violence by Ukrainian forces and civil defense militias.”

U.N. Secretary-General Antonio Guterres warned the Security Council that Russia’s invasion of Ukraine is one of the greatest challenges ever to the international order “because of its nature, intensity, and consequences.”

–With additional files from the Associated Press