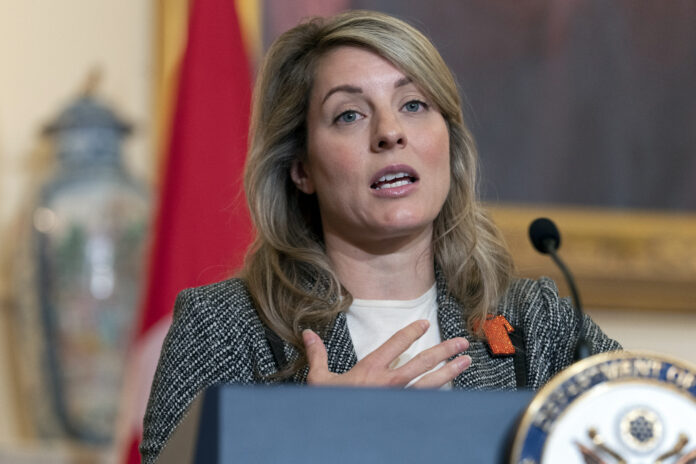 She says the strategy will be shaped by a major meeting the Chinese government is holding in two weeks.

The strategy will include co-operation on climate change, she said in an interview with the Atlantic Council think tank in Washington, D.C.

Joly also revealed she will visit Peru next week for the Organization of American States summit.

In mid-October, she will head to Japan and South Korea.

Business leaders and former diplomats have been pushing the Trudeau government for months to outline Canada’s friends, foes and priorities in the Indo-Pacific region.

“I’ll be coming up with our Indo-Pacific and China policy before the end of the year,” Joly said in a Friday afternoon interview with the think tank.

“We haven’t defined ourselves as an Indo-Pacific country, since the beginning of our history. We’ve always invested a lot in the transatlantic relationship,” she said.

Joly said the strategy will be shaped in part by the Communist Party of China’s national Congress, a major, weeklong meeting that occurs every five years and will start Oct. 16.

President Xi Jinping is expected to outline the country’s economic focus, and whether a strict COVID-19 policy that has disrupted global supply chains will remain in place.

It’s because of those strict rules that Montreal is hosting a major UN summit on biodiversity in December, despite China’s role as its chair.

Joly said she is confident the U.S. will reduce its greenhouse gas emissions but needs more assurance from China, which is the world’s other major polluter.

“We will be leading the way and that’s why it’s important to bring China along,” she said.

“China needs to be at the table. That’s the only way we’ll be able to achieve our objectives. This is existential for us.”

Meanwhile, Joly said her looming visit to Peru will include discussions on how countries can send more fertilizer to Latin America to help offset the knock-on impact of sanctions on Russia.

She blamed Russia for anti-American disinformation in the region, but said governments need to address the grievances that allow disinformation to thrive.

“We have to show up and make sure we offer solutions for inflation, and for the economic challenges that Canadians are also going through,” she said.

“We need to make sure that government works, because following the pandemic, there are definitely frustrations.”