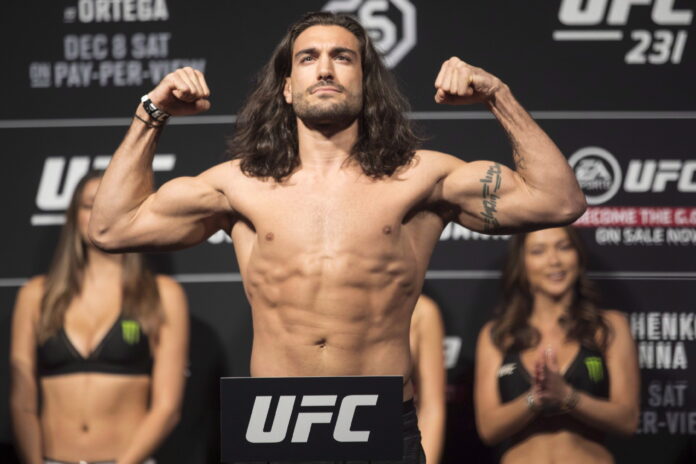 Elias Theodorou, a charismatic mixed martial artist who campaigned successfully for the right to use medical marijuana as an athlete, has died. He was 34.

TSN fight analyst Robin Black, a friend and former fighter himself, said Theodorou had not shared his cancer diagnosis publicly. Black figured Theodorou made that choice “because he couldn’t bear to make people sad.”

“A positive energy if ever there was one, a man who almost always flashed a winning smile, a man who spoke out about what he believed in,” Canadian fighter Sarah Kaufman said on social media.

Theodorou took up MMA in 2009 after his first year at Humber College, where he studied creative advertising.

He made his pro debut in June 2011 and was 8-0-0 in 2013 when he joined the cast of The Ultimate Fighter Nations: Canada vs. Australia, an edition of the UFC’s reality TV show featuring teams of aspiring Canadian and Australian MMA fighters.

Theodorou and 15 other fighters spent six weeks filming in a lodge in the woods about an hour outside of Montreal.

“It was an interesting and amazing experience,” Theodorou said later.

Theodorou earned his UFC contract in April 2014 when he stopped fellow Canadian Sheldon Westcott via second-round TKO in the TUF Nations finale in Quebec City.

1:07Increased hospitalizations for unintentional cannabis poisoning for children under 10 since legalization, study finds

He went on to win eight of 11 fights as a middleweight in the UFC but was cut after a May 2019 loss to Derek Brunson in Ottawa. While Theodorou had a winning record, his grinding style lacked the fireworks the promotion looks for. Nine of his 11 UFC bouts went to a decision.

Theodorou was a fighter with a big gas tank. He kept on the move, often lashing out with kicks or hanging on his opponent at the fence as needed.

His last fight was a win over Bryan Baker last December on a Colorado Combat Club card. His pro record was 19 wins and three losses, with six wins in his last seven outings.

Theodorou campaigned for years to use medical marijuana in the sport, eventually securing a therapeutic use exemption for the marijuana he had been prescribed for bilateral neuropathic pain in his hands, wrists and elbows.

Theodorou, who said cannabis allowed him “to even the playing field and fight at a baseline level,” got the exemption in February 2020 from the B.C. Athletic Commission.

“RIP Elias Theodorou. A great person and a HUGE voice for the more fair and equitable treatment of marijuana use in MMA and sport,” tweeted Jeff Novitzky, the UFC’s senior vice-president of athlete health and performance.

To call Theodorou a people person did not do him justice.

“I’m a very big extrovert,” he once said with a grin. “A stranger is just a friend you haven’t met.”