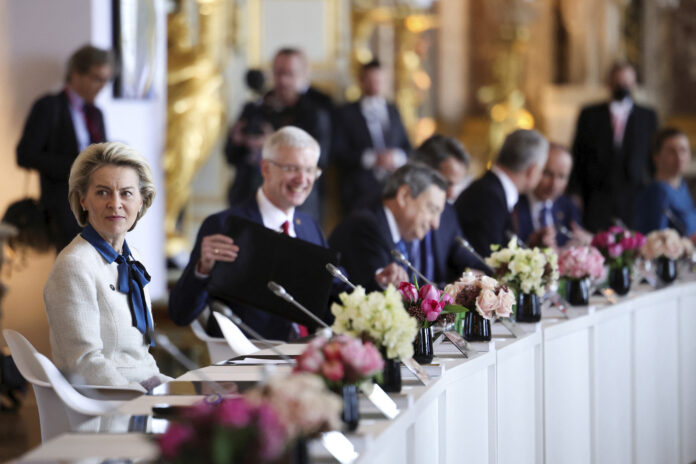 European Union leaders said on Friday they will continue applying pressure on Russia by devising a new set of sanctions to punish Moscow for its invasion of Ukraine while stepping up military support for Kyiv.

The EU’s top diplomat, Josep Borrell, said the 27 officials taking part at two-day summit outside Paris will agree to inject an extra €500 million euros into the fund for military aid to Ukraine, as Russia widens its military offensive.

On Friday, Russia struck near airports in the west of the country for the first time as troops kept up pressure on the capital, Kyiv.

“I made the proposal to double our contribution,” Borrell said. “This is what we are going to do, and I am sure that the leaders will approve it this morning. And it is going to be done immediately. Now it flows quickly.”

The EU had previously agreed to spend 450 million euros ($500 million) on military supplies for Ukrainian forces in an unprecedented step of collectively supplying weapons to a country under attack.

They also decided to exclude three Belarusian banks from SWIFT, the dominant system for global financial transactions. Altogether, EU restrictive measures now apply to a total of 862 individuals and 53 entities.

According to an EU official with direct knowledge of the talks at the Versailles Palace, the idea is to have sanctions ready that can be activated if Putin’s war escalates further. The person was not authorized to speak publicly because of the sensitivity of discussions,

Possible new sanctions against Russia and its ally Belarus could include cutting all their banks from SWIFT, but a total embargo on fossil fuels imports from Russia similar to the one imposed by Washington is not on the table for now.

“We should be able to define the financial sanctions in a wider context. Some banks have been cut from SWIFT and we could add some,” Belgian Prime Minister Alexander De Croo said. “We should have some strategic patience. A few weeks, to see how they bite. At a certain point, it will weaken Russia.”

Luxembourg Prime Minister Xavier Bettel said threatening Russia with the specter of new sanctions should be used to obtain a cease-fire.

“We need to apply high pressure and be successful,” he said.

Meanwhile, U.S. President Joe Biden is set to announce Friday that, along with the European Union and the Group of Seven countries, the U.S. will move to revoke “most favored nation” trade status for Russia over its invasion of Ukraine.

According to a source familiar with the matter who spoke on the condition of anonymity to preview the announcement, each country would have to follow its own national processes. Stripping most favored nation status from Russia would allow the U.S. and allies to impose tariffs on Russian imports, increasing the isolation of the Russian economy in retaliation for the invasion.