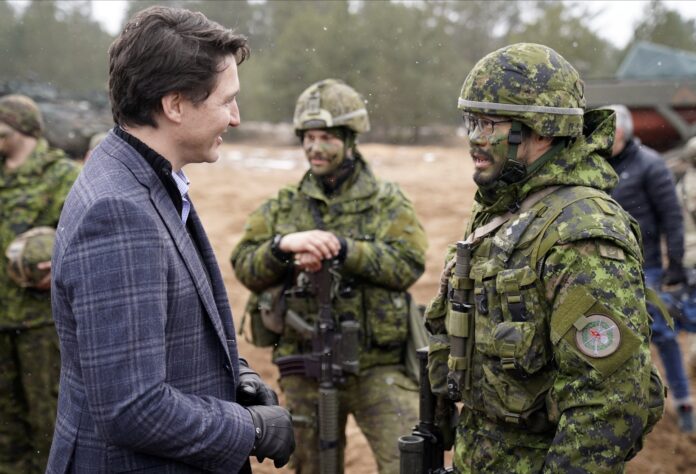 As Western leaders congratulate themselves for their speedy and severe responses to Russia’s invasion of Ukraine, they’re also scratching their heads with uncertainty about what their actions will accomplish.

The U.S., NATO and the European Union have focused on strangling Russia’s economy and arming Ukrainian fighters. But it’s unclear how this will stop the war. No one knows what President Vladimir Putin is thinking, but there’s no reason to believe that even the toughest measures will shatter his determination to force the Western-leaning former Soviet republic back into Moscow’s orbit.

They may not say it publicly, but U.S. officials and their NATO allies don’t see a breaking point for Putin — either an economic toll so severe or battlefield losses so devastating — that would convince him to order his troops home and allow Ukraine’s leaders to govern in peace.

“Ukraine will never be a victory for Putin,” Biden said as he announced a U.S. ban on Russian energy imports on Tuesday. But Ukraine might not be a complete defeat for Putin either.

The sanctions and military aid may have been effective in slowing the Russian advance in Ukraine and perhaps discouraging Putin from targeting other countries. They may serve as a warning for other powerful countries tempted to target weaker neighbors. But Western officials have been vague about how the actions will end the fighting.

One of the most direct answers came from the third-ranking U.S. diplomat, Under Secretary of State for Political Affairs Victoria Nuland. She said Tuesday that internal, rather than external, pressure on Putin will be more effective.

“The way this conflict will end is when Putin realizes that this adventure has put his own leadership standing at risk with his own military, with his own people,” she testified before Congress. “He will have to change course, or the Russian people take matters into their own hands.”

A more provocative remark came from Republican Sen. Lindsey Graham of South Carolina, who called for the Russian people to assassinate Putin. The White House quickly distanced itself from that comment.

In fact, there is no sign yet that his grip on power has loosened. There’s also the frightening uncertainty about how a nuclear-armed Putin, if cornered, would respond to a genuine threat to his power if one were to arise.

Half of American IQs lessened by lead in gasoline, study says

And no one is counting on an outright military victory by Ukraine. While Ukrainian fighters have put up a remarkable defense and are determined to fight for as long as Russian forces remain on their soil, they are badly outgunned and would be hard-pressed to push Russian troops back across the border. Meanwhile, NATO nations aren’t about to risk triggering World War III by joining the fight in defense of a non-member state.

Former Latvian president and Montreal professor on Putin: ‘He’s a narcissist and a psychopath’

Against this backdrop, a diplomatic solution appears unlikely. Russia has only hardened its demands since launching the invasion last month and attempts at diplomacy by French, Israeli and Turkish leaders have thus far proven fruitless. The top U.S. and Russian diplomats aren’t even talking to each other and recent lower-level communications have focused almost entirely on the expulsions of diplomats from their two countries.

“Nobody knows how this is going to end and it’s going to take some time to see how the Russians decide to react to the obvious dead-end that they’ve got themselves into,” said Jeff Rathke, a European expert and president of the American Institute for Contemporary German Studies at Johns Hopkins University.

“Until the Russians are ready to negotiate something serious and real, there’s not much you can do,” he said. He added that the U.S. and Europe should resist the temptation to negotiate themselves with Putin over Ukraine, especially as the economic costs of isolating Moscow mount, particularly in Europe. “The endgame has to be decided by the Ukrainians in terms of what they will accept,” he said.

“I can’t see this ending in any way good for Ukraine as long as Putin is in power,” said Ian Kelly, a retired U.S. diplomat and former ambassador to Georgia who now teaches international relations at Northwestern University. “He’s put out his maximalist goal, which is basically surrender, and that’s something the Ukrainians aren’t going to be able to accept and the Russians are not going to be able to implement.”

“Withdrawal for him is death. It’s too weak,” Kelly said.

Secretary of State Antony Blinken acknowledged the limits of the West’s ability to end the conflict.

“What we’re looking at is whether or not President Putin will decide to try to finally cut the losses that he’s inflicted on himself and inflicted on the Russian people. We can’t decide that for him,” he said Wednesday.

Appearing beside Blinken, British Foreign Secretary Liz Truss suggested the Western response may go beyond hopes of getting Russia out of Ukraine.

“Putin must fail,” she said. “We know from history that aggressors only understand one thing, and that is strength. We know that if we don’t do enough now, other aggressors around the world will be emboldened. And we know that if Putin is not stopped in Ukraine, there will be terrible implications for European and global security.”

With the uncertainty, U.S. officials have said they are convinced of only one thing: that an angry and frustrated Putin will pour more troops and firepower into Ukraine and the bloodshed will get worse before the situation approaches any return to normalcy.

CIA Director William Burns, a former U.S. ambassador to Russia, told lawmakers this week he believes Putin has profoundly miscalculated the resistance and determination that his forces would meet from Ukrainians. He also said it may soon dawn on Putin that he will not be able to occupy Ukraine or impose a Russia-friendly regime there without facing years, if not decades, of fierce and bloody opposition.

“Where that leads, I think, is for an ugly next few weeks in which he doubles down with scant regard for civilian casualties, in which urban fighting can get even uglier,” Burns said.