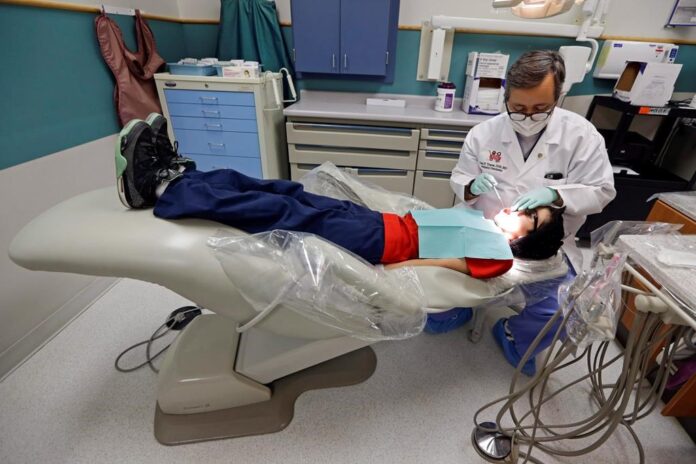 A University of Calgary economist warns a new federal dental benefit for children could open families up to the potential for “clawbacks” if they don’t spend all the money on their kids’ teeth.

The government plans to offer cheques of up to $650 to qualifying low- and middle-income families with children under the age of 12 to help pay for their dental needs.

The program has some similarities to the Canada Emergency Response Benefit, which saw the federal government pay out roughly $82 billion to workers who lost their jobs during the pandemic.

The government faced an onslaught of criticism from opposition parties when some Canadians unexpectedly had to pay back thousands of dollars because they were given more than they qualified for.

The dental-care benefit has many of the same faults, said Lindsay Tedds, an associate professor of economics, and will likely result in similar clawbacks.

“This is going to happen. They’re setting it up to happen,” Tedds said in an interview.

The program is open to families with a household income of less than $90,000.

Qualifying families will have to attest that they don’t have private insurance, that they have out-of-pocket dental expenses and that they will keep their receipts.

Tedds said many low-income families already qualify for provincial dental coverage and may not use all the money they get from the federal government. Others may lose their receipts, or use the money for other pressing needs.

Unless the government changes the criteria, she said some marginalized families are going to face consequences from the Canada Revenue Agency.

“It’s frustrating to see we haven’t learned from our emergency programs,” she said.

The departments of Health and Finance did not immediately respond to requests for comment.

The government has repeatedly suggested the federal dental plan is intended for children who don’t already have dental benefits, but the criteria released so far doesn’t necessarily preclude people with provincial coverage from applying.

“I would call that a lack of clarity,” said Dr. Carlos Quinonez, vice dean and director of Schulich Dentistry at Western University, who has been consulted by the federal government.

“Eventually, some type of policy guide is going to have to be developed that is probably going to be clarifying those things.”

That clarity may come once the legislation is tabled in the House of Commons, which could happen as early as Tuesday, when the health and associate finance ministers plan to hold a press conference about the bill.

The government hopes to make the first payments as early as Dec. 1.

Dental care is a major element of the supply and confidence agreement between the Liberals and the NDP, a deal that will prop up the Liberal minority government and prevent another election until 2025.

The government has until the end of the year to deliver on the first phase of its plans or risk the NDP walking away from the deal.

NDP Leader Jagmeet Singh said his party is encouraging the government to trust Canadians, and not spend a lot of time and resources auditing families when the benefit is only temporary.

The government has promised to get a full-fledged dental program off the ground by 2025.

“We want this to be a generous program that trusts Canadians to take care of their families,” Singh said in an interview.

The decision may not be up to the Liberals though, Tedds said, since the CRA operates at a relatively arms length from government.