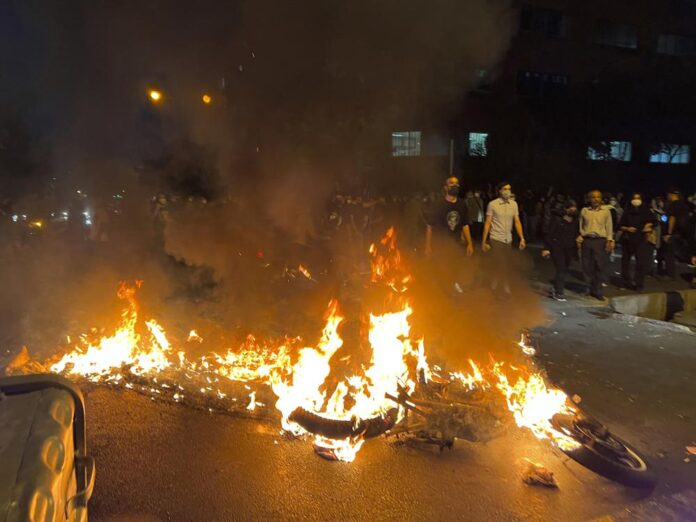 Several days of protests have erupted in Iran following the death of a 22-year-old woman who was arrested and in police custody for allegedly breaking hijab rules.

On Tuesday, several international leaders criticized the country for the death of Mahsa Amini, who fell into a coma last week only hours after being detained by Iran’s morality police, the BBC reported.

Amini was detained by morality police on Sept. 13 outside a transit station in Tehran. She was accused of breaking a modesty law that requires women to wear a headscarf, cover their arms and legs and wear loose clothing.

Amini’s death has been the catalyst for many Iranian women who, in protest, have publicly removed their headscarves, cut their hair and burned their hijabs.

In one video shared to social media, a woman in Kerman is seen sitting on an elevated structure surrounded by crowds chanting “Death to the dictator,” a chant in reference to Iran’s supreme leader, Ayatollah Ali Khamenei. As the woman claps, a man hacks off her ponytail and holds it to the crowd.

In a growing TikTok trend, many other women and men are also cutting their hair in protest.

Tehran’s chief of police called Amini’s death “unfortunate,” and said it is an incident he does not want repeated. The BBC reported that several witnesses claimed that Amini was beaten inside a police vehicle en route to a detention centre.

Iranian police have denied any beating ever occurred, claiming instead Amini suffered “sudden heart failure” while waiting to be “educated” at a women’s facility.

Police also released CCTV footage of Amini’s arrest, in which she is approached by a female officer who holds onto her clothing before Amini collapses to the ground with her head in her hands.

Amini’s father has since spoken to a pro-reform news outlet and claimed the CCTV footage released by police had been edited. The father also said Amini was physically fit and had no prior health issues. He said that when he visited Amini in hospital after her coma, she had visible bruises on her legs.

Since the public announcement of Amini’s death, massive protests in Tehran have caused clashes with security forces and other unrest that claimed at least three lives. The UN human rights office called for an investigation. The United States, which is trying to revive the 2015 nuclear deal with Iran, called on the Islamic Republic to end its “systemic persecution” of women. Italy also condemned her death.

The governor of Tehran province, Mohsen Mansouri, accused foreign embassies of fanning the protests and said three foreign nationals had been arrested. He did not specify the nationality of the embassies or the detainees.

The UN body said Iran’s morality police have expanded their patrols in recent months, targeting women for not properly wearing a hijab. The Associated Press obtained verified videos showing women being slapped in the face, struck with batons and thrown into police vans for wearing the hijab too loosely.

Amini was detained by one of these morality police patrols.

U.S. Secretary of State Antony Blinken wrote on Twitter that Amini “should be alive today.”

“An investigation was ordered into (the) tragic death of Mahsa, who, as (the) President said, was just like our own daughters,” he tweeted. “To Iran, human rights are of inherent value — unlike those who see it (as) a tool against adversaries.”

Amini, who was Kurdish, was buried Saturday in her home city of Saqez in western Iran. Protests erupted there after her funeral and police fired tear gas to disperse demonstrators on Saturday and Sunday. Several protesters were arrested.

The protests spread to Tehran and other cities on Monday. A news website affiliated with state TV said 22 people were arrested at a protest in the northern city of Rasht.

State TV showed footage of protests on Monday, including images of two police cars with their windows smashed. It said the protesters torched two motorbikes as well, and that they burned Iranian flags in Kurdish areas and Tehran.

In this Monday, Sept. 19, 2022, photo taken by an individual not employed by the Associated Press and obtained by the AP outside Iran, a man pulls out a police motorcycle which is set on fire during a protest over the death of a young woman who had been detained for violating the country’s conservative dress code, in downtown Tehran, Iran.

Iran has seen waves of protests in recent years, mainly over a long-running economic crisis exacerbated by western sanctions linked to the country’s nuclear program. Authorities have managed to quash the protests by force.

— With files from The Associated Press.