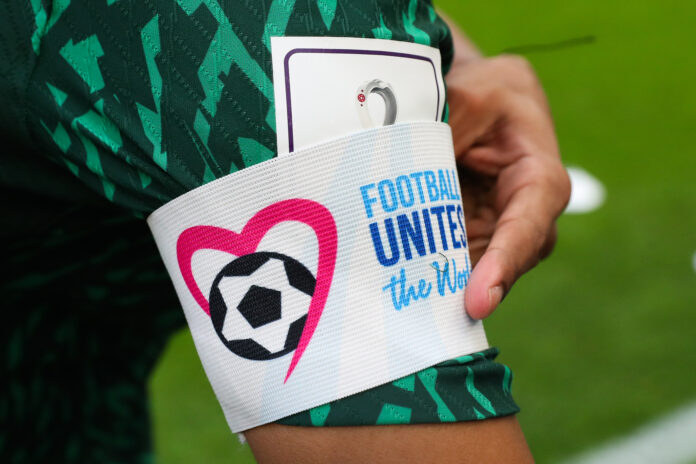 FIFA’s threat of on-field punishment for players wearing “One Love” armbands during the Qatar World Cup is a “political decision to restrain the freedom of expression of athletes,” Canada’s sport minister says.

Pascale St-Onge told reporters in Ottawa on Tuesday it was “unfortunate” soccer’s international governing body was taking a hardline stance on the armbands.

Captains of several European teams had planned to wear the rainbow-patterned armband during the tournament, which was seen as a rebuke to host nation Qatar’s human rights record and its criminalization of homosexuality.

“Sports organizations are trying to separate politics and sport, but these types of decisions are also a political decision to restrain the freedom of expression of athletes that want to share their solidarity with the LGBTQ community,” St-Onge said.

“It’s unfortunate. Athletes should have the right to express their opinion and at the same time protect the sport environment and make sure that all athletes can compete fairly.”

On Monday, FIFA said it would issue yellow cards to captains who wore armbands that were not approved by the organization. That would mean the player would start the game with a yellow, just one caution away from ejection from that game and the next. European teams were expecting to be fined, the nations said in a joint statement.

According to FIFA rules, for final FIFA competitions, captains must wear the captain’s armband issued by FIFA.

The armband issue was the latest dispute that threatened to overshadow play on the field.

Since being named host in 2010, Qatar has faced criticism for its treatment of migrant workers and women and its suppression of free speech. It has also come under significant fire for its criminalization of homosexuality.

England’s Harry Kane is shown wearing the ‘One Love’ captain’s armband during a match on Sept. 23.

No one wore the “One Love” armband on Monday. England’s Harry Kane wore FIFA’s official “No Discrimination” armband in the match with Iran. The England team also took a knee prior to kickoff as an anti-racism gesture. The team has knelt before games since 2020, initially in solidarity with protests over George Floyd’s death and then in support of equality.

Canada’s captain, Atiba Hutchinson, will wear the “No Discrimination” armband in Wednesday’s game against Belgium. The Canadian men have not detailed if they have any form of protest planned during the tournament. The decision for Hutchinson to wear FIFA’s armband was made by the entire team, a Canada Soccer official told The Canadian Press.

Defender Steven Vitoria told reporters on Monday the team is “always ready to help what we believe is correct.”

“I don’t really want to go into that detail but I think our image as Canada as a country, we’re always here to protect the good,” he said.

America’s top diplomat on Tuesday also criticized FIFA’s decision. Speaking alongside his Qatari counterpart at a news conference, U.S. Secretary of State Antony Blinken said it was “always concerning … when we see any restrictions on freedom of expression.”

“It’s especially so when the expression is for diversity and for inclusion,” Blinken said at Doha’s Diplomatic Club. “And in my judgment, at least no one on a football pitch should be forced to choose between supporting these values and playing for their team.”

FIFA said in a statement on Monday it is an “inclusive organization that wants to put football to the benefit of society by supporting good and legitimate causes, but it has to be done within the framework of the competition regulations, which are known to everyone.”

The statement added FIFA president Gianni Infantino “has reiterated his support of the LGBTQI+ community during the FIFA World Cup Qatar 2022.”

— with files from The Canadian Press and The Associated Press