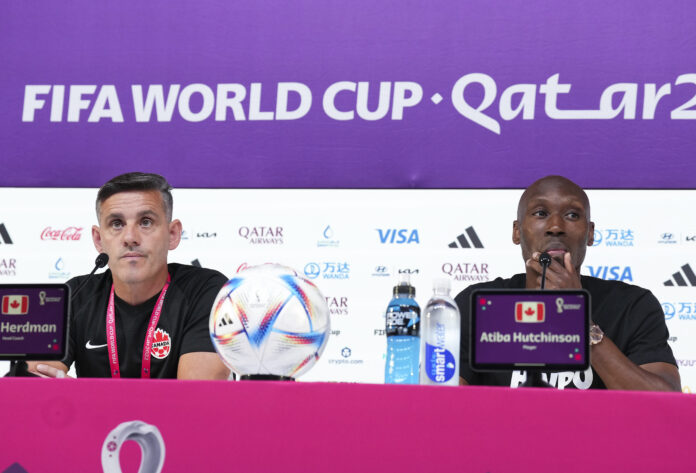 Back in the World Cup for just the second time and the first time in 36 years, underdog Canada will head into their opener against second-ranked Belgium 100 per cent fit and with nothing to lose, coach John Herdman said on Tuesday.

Canada had been hit with a number of injury concerns in the run-up to Wednesday’s match at Ahmad Bin Ali Stadium, including questions of whether Alphonso Davies had recovered from a hamstring strain that had taken the dynamic Bayern Munich left back out of action in early November.

‘We believe’: Canada confident ahead of FIFA World Cup opener in Qatar

Davies, who will play on the wing for Canada, only joined his team mates on Friday after staying back in Germany for treatment.

Herdman had said Davies would be assessed when he arrived in Doha and on Tuesday pronounced the 22-year-old good to go.

“When you speak to a player you have to look into their eyes and get a sense of what they want and how far they are willing to push,” Herdman said at his pre-match press conference.

“You’ve got ask the question, if not the first game what’s the risk, what’s the second game risk but at the end of the day Phonzie is fit now.

“Canada is in the position now where we can field our strongest team. Everyone has came through well.

“It’s exciting times now, the dark clouds have shifted, this is our last training session where we will all be 100 per cent.”

With Maxime Crepeau already ruled out with a broken leg suffered in the MLS Cup final, Canada was facing a crisis in goal if Borjan, who has been bothered by an abdomen niggle, was unable to play leaving Herdman to choose from inexperienced backups in Dayne St. Clair and the uncapped James Pantemis.

“It’s been a great journey to get here (we’ve been) gritty and resilient and hopefully that’s what you will see from us this tournament,” said Herdman, whose other Group F opponents include 2018 finalists Croatia and Morocco. “Coming into a game like this we don’t have a great amount to lose.”

3:38
World Cup having positive impact on soccer in Saskatchewan

“We have a genuine opportunity to make it our Cup Final that’s what it is for Canada.”

“We’re pinching ourselves it’s just real now and getting more real by the hour.”

Having not been in the World Cup since 1986, Canada’s players have never experienced the pressure of such moments and that says Herdman could be a positive.

“We’ve got this sort of wisdom of having never been here before and there is an element of no fear of certain elements Belgium can bring because it is all new to us,” said Herdman. “So there will be a naivety that will work for us and work against us.”