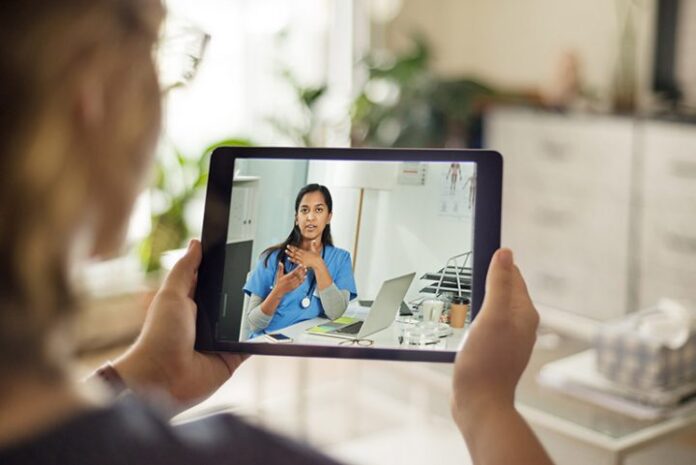 It started as headaches, nausea and feelings of pressure in his head – things most people attribute to stress, dehydration or a simple virus.

But when Dylan Harris started briefly losing his eyesight three months ago every time he coughed or sneezed after months of debilitating pain in his head, he knew he needed to see a doctor.

The problem was, the then-Newfoundland and Labrador resident didn’t have a doctor.

Harris had been on a waiting list for a family doctor since moving to Canada’s easternmost province three years prior.

He believes being able to access virtual health care saved his life. The mass turned out to be benign, but the side effects it was having on his ability to perform simple functions were severe.

“There were points leading up to the days before the scan and getting the actual surgery where I’d be driving to work on the highway and I’d have one of these sneezing, coughing fits and I couldn’t see for three-to-five seconds,” he said.

“I don’t know if I’d be here if I didn’t if I didn’t receive the virtual care that I did … I know that it saved my life.”

Virtual care is one of many innovations in health care that experts and health authorities have been studying and trying out in baby steps for a number of years, but the COVID-19 pandemic vastly accelerated both the opportunities and challenges of this emerging field of medicine.

Now, in the wake of what many are calling a “crisis” in Canada’s health system due to nation-wide shortages of health workers, ongoing waves of COVID-19 infection and cascading ER closures in hospitals across the country, virtual care is increasingly being eyed as a solution to fill some gaps in the health system.

Already, more Canadians than ever have been seeing doctors virtually, according to information published in June 2021 by Canada Health Infoway.

The Canadian Institute for Health Information (CIHI) also released data showing that, in February 2020, for the provinces where data were available, 48 per cent of physicians had provided at least one virtual care service. By September 2020, this number had increased to 83 per cent.

In 2019, virtual care accounted for between two and 11 per cent of services that patients received, depending on the province, according to the CIHI. One year later, patients in Ontario, Manitoba, Saskatchewan, Alberta and British Columbia received between 24 per cent and 42 per cent of their health services virtually and an average of 16 per cent of the population of these five provinces received one or more virtual health services per month, CIHI data shows.

As for what health care services are available to patients in Canada virtually, it varies widely, depending on the province or region. Even the term “virtual care” can encompass a variety of mediums, including receiving care from a physician via telephone consultation, through videoconferencing or getting prescriptions or medical paperwork through email or secure electronic messaging.

When it comes to seeing a physician virtually, there are a number of different platforms, many of which are operated by for-profit companies, such as Telus Health, Maple, Babylon, Tia Health and Rocket Doctor. These companies contract licensed physicians to see patients in a kind of online walk-in clinic.

Patients who use these services are first assessed to ensure they are appropriate for virtual care, and are then usually able to see a doctor virtually more quickly than if they visited an in-person walk-in clinic or emergency department.

Dr. William Cherniak, an emergency physician and CEO of Rocket Doctor, says he believes his platform provides an opportunity for the nearly five million Canadians who do not have a family doctor (according to Statistics Canada) to receive the care they need without clogging up emergency rooms already overwhelmed with too many patients and not enough staff.