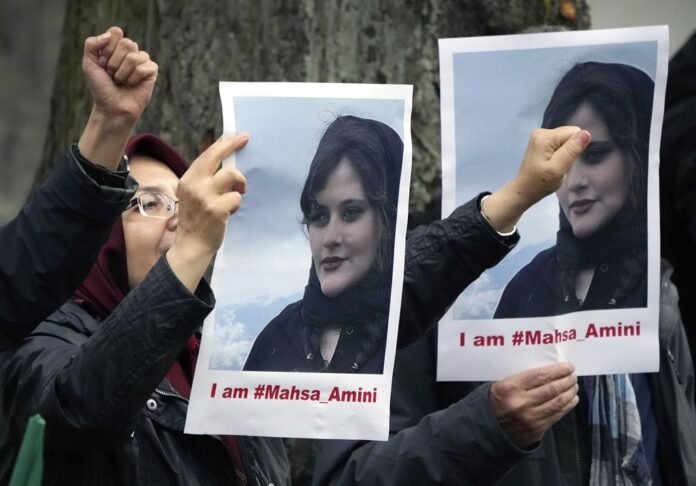 The tears come quickly to Masih Alinejad when she talks about the messages she’s received in recent days from women in Iran protesting against their government after a young woman died in police custody over a violation of the country’s strict religious dress code.

They talk about the risks, possibly fatal ones, in facing off against government forces that have a long history of cracking down on dissent. They share stories of saying goodbye to their parents, possibly for the last time. They send videos of confrontations with police, of women removing their state-mandated head coverings and cutting their hair.

“I feel the anger of people right now through their text messages,” Alinejad told The Associated Press in New York City, where the 46-year-old opposition activist and writer in exile has lived since fleeing Iran following the 2009 election.

“They have been ignored for years and years,” she said. “That is why they are angry. Iranian women are furious now.”

The spur for this latest explosion of outrage was the death this month of 22-year-old Mahsa Amini. The young woman was detained on Sept. 13 for allegedly wearing her hijab too loosely in violation of strictures demanding women in public wear the Islamic headscarves. She died three days later in police custody; authorities said she had a heart attack but hadn’t been harmed. Her family has disputed that, leading to the public outcry.

Protests started after her Sept. 17 funeral, and have taken place in more than a dozen cities. According to a tally by The Associated Press based on statements from state-run and semiofficial media, at least 11 people have been killed, while a state TV anchor said the number is even higher. The Iranian government has pushed back, clashing with demonstrators and clamping down on internet access.

Alinejad shares the outrage of the protesters; for more than a decade she has been an outspoken critic of the theocracy that rules the country and its control over women through the required wearing of the hijab and other measures. In 2014, she started My Stealthy Freedom, an online effort encouraging Iranian women to show images of themselves without hijabs.

“Let me make it clear that Iranian women who are facing guns and bullets right now in the streets, they’re not protesting against compulsory hijab like just a small piece of cloth. Not at all,” she said.

Trudeau vows aid to Atlantic Canada as Hurricane Fiona nears: ‘Going to be a bad one’

Alinejad, who grew up following the rules on religious coverings in the small Iranian town where she was born, began pushing back against being forced to don certain garments when she was a teenager.

But even she, who now displays her full head of curly hair as a matter of course, didn’t find it easy to overcome a lifetime of conditioning.

“It was not easy to put it away, like overnight,” she said. “It took three years for me, even outside Iran, to take off my hijab.”

She said the first time she went out without a religious covering, in Lebanon, she saw a police officer and had a panic attack. “I thought the police are going to arrest me.”

Her activism has made her no fans among Iranian officials and supporters of the government.

Last year, an Iranian intelligence officer and three alleged members of an Iranian intelligence network were charged in federal court in Manhattan with a plot to kidnap her and take her back to Iran. Officials in Iran have denied it. In August, an armed man was arrested after being seen hanging around Alinejad’s Brooklyn home and trying to open the front door.

She’s committed to her cause, though, and supporting those in Iran, women and men, who are engaged in the protests. She would love to see more support from those in the West.

She worries what will happen to the demonstrators in Iran as the government takes action to remain in control and shut down dissent, if there is no outside pressure.

“My fear is that if the world, the democratic countries don’t take action, the Iranian regime will kill more people,” she said, scrolling through her phone to show images of young people she says have already been killed in the current wave of protest.

She called the women in the protests warriors and “true feminists.”

“These are the women of suffragists risking their lives, facing guns and bullets,” she said.

But even if, as has happened in the past, the government exerts enough control to quiet the protests down, it won’t make the dissent go away, she said.

The “Iranian people made their decision,” she said. “Whether the regime cracks down on the protests, whether they shut down the internet, people of Iran won’t give up. … The anger is there.”