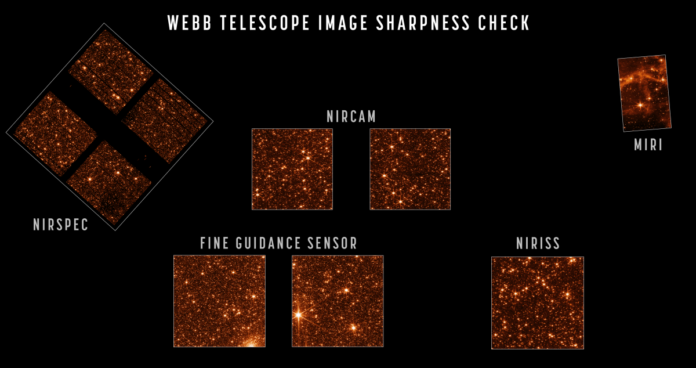 The James Webb Space Telescope (JWST) is now fully aligned, and NASA has the pictures to prove it.

To herald the completion of the alignment of Webb’s 18 gold mirrors, used to capture light from distant and ancient galaxies, NASA released a series of images showing the telescope’s full field of view in deep space.

For these test images, Webb was pointed at the Large Magellanic Cloud, a satellite galaxy of the Milky Way. The sharply focused images show a dense field of hundreds of thousands of stars rendered by each of the JWST’s science instruments.

A second, more detailed version of the test images that NASA released showing that the James Webb Space Telescope is fully aligned.

“These remarkable test images from a successfully aligned telescope demonstrate what people across countries and continents can achieve when there is a bold scientific vision to explore the universe,” said Lee Feinberg, Webb optical telescope element manager.

The JWST team found that its optical performance is even better than its most optimistic predictions and has unanimously agreed that the telescope’s alignment is complete. It is now moving on to the last stage of preparation.

Scientists will finely calibrate and test the four science instruments on board, used to interpret the light that Webb collects into images. NASA expects this process to take a few months and said the Webb telescope will become fully operational in the summer.

As the Hubble’s $10-billion successor, the Webb telescope has been hailed as the world’s premier space observatory. Once fully operational, the JWST will be able to peer back into time, possibly to 100 million years after the Big Bang.

Ever since its launch on Christmas day last year, scientists and crews at NASA have been working to align its 18 gold mirror segments into their correct position. Webb’s mirror array is so large that to fit it inside the rocket for its deployment, it had to be folded up.

In this 2017 photo made available by NASA, technicians lift the mirror assembly of the James Webb Space Telescope using a crane.

Scott Acton, a wavefront sensing and controls scientist, spoke about the impact that working on the JWST had on him.

“With the completion of telescope alignment and half a lifetime’s worth of effort, my role on the James Webb Space Telescope mission has come to an end,” Acton said. “These images have profoundly changed the way I see the universe. We are surrounded by a symphony of creation; there are galaxies everywhere! It is my hope that everyone in the world can see them.”

In March, NASA shared another image while Webb was still in the process of alignment. It showed what is possible when the 18 mirror segments act as one giant 6.5-metre-wide mirror to capture the light from a single star.

Galaxies and stars can be seen behind the star 2MASS J17554042+6551277 in this image captured by the James Webb Space Telescope.

By the time summer is over, who knows what else the Webb telescope will reveal about our cosmos?

3:21The Next Hubble: Why the James Webb space telescope could reshape our understanding of the universe