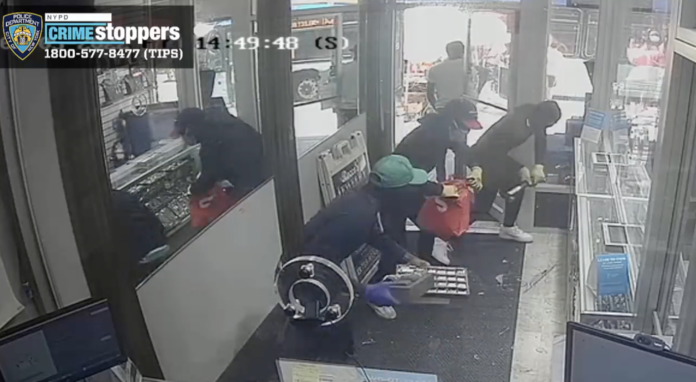 Police are looking for four masked men who stole over US$2 million in merchandise from a jewelry store in the Bronx last week in a brazen smash-and-grab robbery.

The lightning-fast robbery occurred on Friday afternoon around 2:40 p.m. at Rocco’s Jewelry, the New York Police Department said. The shop is located on a busy avenue just steps from Fordham University and down the road from the New York Botanical Garden.

The robbery happened in broad daylight.

NYPD Crime Stoppers shared a video of the incident captured on the business’s surveillance camera, showing the four masked suspects clearing out the jewelry store’s shelves.

The footage shows one man getting buzzed into Rocco’s Jewelry by an employee and propping open the door for a few seconds before three other men charge into the store.

Once inside, the three masked men dressed in black “then used a hammer to smash the display cases and removed a large amount of diamond jewelry,” the police said in a news release.

The robbers are seen on video shoving cases of high-end jewelry into a food delivery bag before fleeing the store on foot.

Multiple outlets reported that the combined value of the gems stolen from Rocco’s was around $2.15 million.

The entire robbery took place in about 30 seconds. No injuries were reported.

Witnesses who spoke to CBS New York said the robbery appeared to have been planned because of how fast it was carried out.

“They came in, boom boom boom, in and out and gone,” one man said.

The NYPD is asking for the public’s help in identifying the four men and is offering up to $3,500 as a reward.