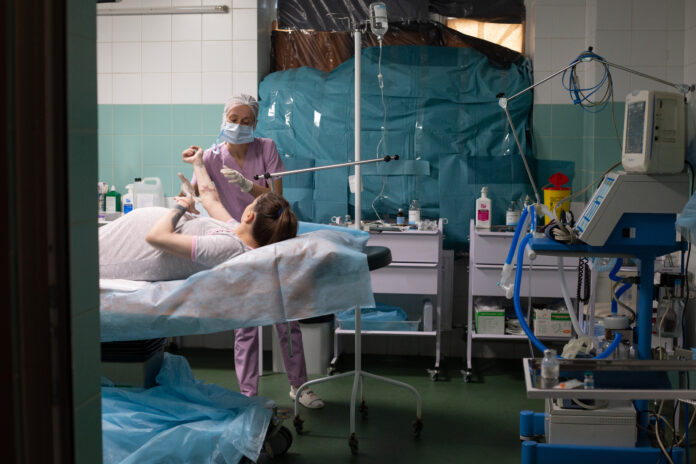 A shortage of epidural tubes used to provide pain medication primarily during labour and delivery is affecting most provinces, but supply issues seem to be worse in Western Canada, says the vice-president of the Canadian Anesthesiologists’ Society.

Dr. Lucie Filteau said “murmurings” of a shortage of the tubes, or catheters, began recently on a private online page of about 300 anesthesiologists across the country.

“We thought there were just isolated little pockets, and people started to become aware that it was more widespread,” said Filteau, an anesthesiologist at The Ottawa Hospital.

She said an apparent lack of information about the shortage from manufacturers to Health Canada and from governments to health-care providers has been “frustrating, basically in all directions” due to the lack of a co-ordinated approach for all provinces and territories.

British Columbia, Alberta, Saskatchewan and Manitoba seem to be most affected by the shortage, Filteau said.

“If the shortage is global, maybe it wouldn’t make a difference. But I do think that on the communication side, on the supply-chain side and the protocols that exist, there’s room for improvement.”

The lack of multiple suppliers, if that is the case, could create a “perfect storm” involving the equipment that is also used to provide pain relief for patients after major chest or abdominal surgery, Filteau said.

A Health Canada report listing medical device shortages says an epidural catheterization kit and a set used to deliver anesthesia involves one manufacturer, Arrow International LLC of Pennsylvania. It says a shortage that began on July 18 is estimated to last until the end of December.

Health Canada could not immediately reply when asked if the manufacturer informed it about a looming shortage.

On average, about 50 to 60 per cent of pregnant women across Canada rely on epidurals to manage pain. The highest use, up to 80 per cent, is in urban areas where more anesthesiologists are available to provide that service, especially to those having their first baby, Filteau said.

“If you’re having your second or third baby and are at the point where you’re just popping them out, then it’s not used as often.”

The tube allows an anesthesiologist to deliver pain medication in the epidural space around the spinal cord and nerve roots to create a band of numbness around the lower body, while still enabling someone to push when it’s time to give birth.

Nitrous oxide, or laughing gas, could also be used, as well as morphine or fentanyl, or a local anesthesia if a catheter is not available, Filteau said.

While those techniques help “take the edge off,” they’re not as effective as an epidural, which is the gold standard in providing continuous pain relief, for hours or days, compared with a one-time injection, she added.

“I think women would have to adjust their expectations about their birthing plan and the degree of pain relief that they can expect,” she said of those anxious about enduring pain.

Filteau said women should be considering birthing coaches and learning about alternatives to prepare themselves in case an epidural cannot be provided.

The Canadian Anesthesiologists’ Society has been communicating by email with members across the country and is planning a webinar next week to review alternative pain-relief techniques, Filteau said.

“It’s going to be difficult for us to deal with a potentially triaging-type situation. Nobody wants to be in that position involving the ethical, moral, medical, legal aspect of withholding care because of a lack of resources. As practitioners, as providers of pain relief, we’re quite upset at not having the tools that we need to provide the standard of care that’s expected by Canadians.”

Jen Allan, a doula in Vancouver, said one of her clients requested an epidural at BC Women’s Hospital last week but the anesthesiologist did not seem to be concerned about a shortage of equipment at that time.

Shortages in the future would be “worrisome,” Allan said.

“We do have a varied skill set about how to support clients through natural birth. Having said that, obviously, it would be very concerning because it should be something that’s available for any birthing person should they decide to use it,” she said, adding an epidural is used for most caesarean deliveries.

“If this really is going to be affecting people locally, I do think there’s a lot of women that will be very anxious because the epidural rate at BC Women’s (Hospital) is 80 per cent.”

The Provincial Health Services Authority said the rate of epidurals at the hospital is about 50 per cent and it has approximately 1,300 epidural tubes in stock, enough to last “several months.”

The Saskatchewan Health Authority said a supply-chain issue may affect care teams’ ability to provide epidurals for pregnant women and to those who may need them after major surgery.

“The (health authority) is working to secure further supplies and ensure care teams are optimally utilizing existing supplies,” it said in a release. “During pregnancy, there are several medical considerations where the use of an epidural improves the health and well-being of both mother and baby. It is critical that supply is maintained to reduce risks for these patients.”