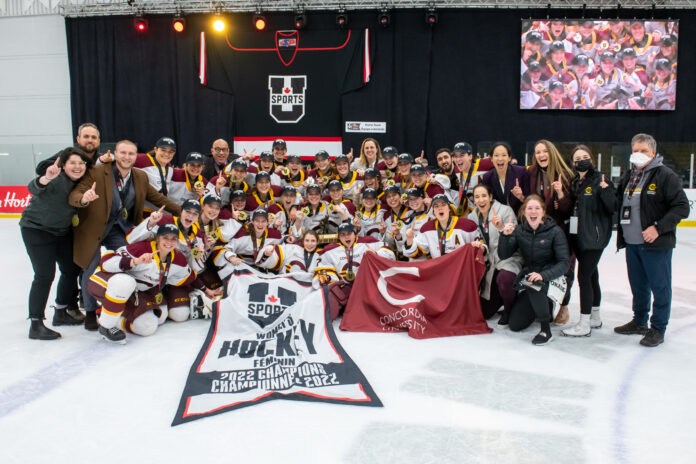 It was a moment that hasn’t happened since 1999.

The Concordia Stingers women’s hockey team reclaimed the title of national champions with a 4-0 victory against the Nipissing Lakers.

In a hard-fought battle on Sunday in Prince Edward Island, goalie Alice Philbert made 25 saves for the shutout.

Stephanie Lalancette, who was later named MVP of the game, scored two goals. Team captain Audrey Belzile scored one to put the game out of reach in the third period.

“It’s like a dream come true,” said Belzile. “I’m so proud of this team — we finally get this (gold medal) and I could wish for a better ending.”

The road to the trophy wasn’t easy.

The team says it has been especially difficult over the last two years due to the COVID-19 pandemic. Games were postponed and the national championship was cancelled twice. The players often spent time away from the ice and one another.

“I think it took us a bit of time, as far as culture wise, to get back to where we wanted to be,” said head coach Julie Chu. “But the second half in particular — and with that unfortunate little bit of COVID break that we had — I think everything clicked.

“We all realized the opportunity we had in front of us and what everyone means to this process.”

Emmy Fecteau, Brigitte Laganière and Audrey Belzile at the Concordia arena on March 29, 2022.

So bringing the golden path trophy and championship banner back to Concordia University in Montreal on Tuesday was that much sweeter.

Forward Emmy Fecteau says she still can’t seem to wrap her head around the win. She has  been smiling for almost 48 hours.

For players like Belzile and assistant captain, Brigitte Laganière, this was their last run with the Stingers. They will be graduating this spring.

But they say the team still has the core to be able to bring back championships in the future.

“They have so much talent and I think they still have the core, the team is still there — so they’re just going to keep growing from there,” said Laganière.