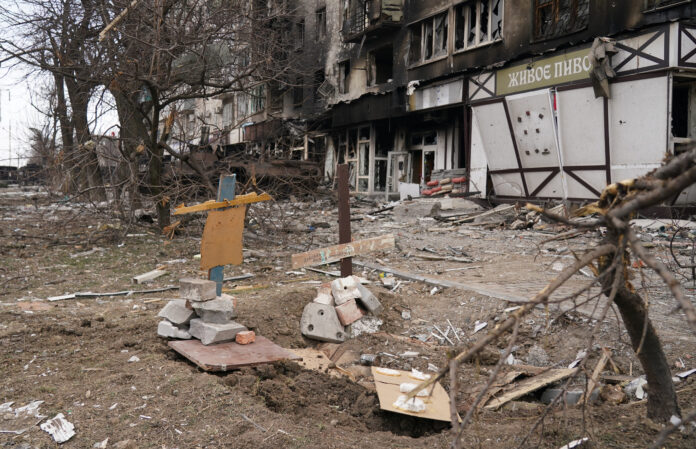 Almost 5,000 people, including roughly 210 children, have died in the besieged southern Ukrainian city of Mariupol since Russia invaded last month, according to the mayor’s spokesperson.

On Monday, the spokesperson quoted data from the mayor’s office that said about 90 per cent of buildings in the port city had been damaged, and about 40 per cent had been destroyed. It was not immediately clear how the death toll was calculated.

Damaged buildings are seen as civilians were evacuated along humanitarian corridors from the Ukrainian city of Mariupol under the control of Russian military and pro-Russian separatists, on March 26.

“The situation in the city remains difficult. People are beyond the line of humanitarian catastrophe,” Boichenko said on national television. “We need to completely evacuate Mariupol.”

Every Mariupol civilian must be evacuated to avoid catastrophe, mayor urges

Russia, which invaded Ukraine on Feb. 24, has denied targeting civilians in the conflict, and has blamed Ukraine for the repeated failure to execute safe corridors for trapped civilians in Mariupol.

Mariupol made international headlines on March 16 when a drama theatre sheltering hundreds of residents in its basement was bombed. Satellite photos taken before the attack showed an enormous inscription reading “children” in Russian posted outside the building.

Local officials, citing witness accounts, said last Friday that as many as 300 people may have been killed in the strike.

The city council made clear it was still not possible to determine the exact death toll, and the Ukrainian government has said it’s almost impossible to tell how many have been killed because Mariupol is under almost constant bombardment.

Russia has denied bombing the theatre.

Last week, the United Nations’ human rights team reported growing evidence of mass graves in the besieged city, including one that appeared to hold 200 bodies.

“The extent of civilian casualties and the destruction of civilian objects strongly suggests that the principles of distinction, of proportionality, the rule on feasible precautions and the prohibition of indiscriminate attacks have been violated,” said the UN’s Matilda Bogner.

Maxar before and after satellite imagery of the Mariupol Drama Theatre from March 14 and March 19.

Mariupol, which was home to about 400,000 people before the war, has seen heavy Russian bombardment since President Vladimir Putin ordered his troops into the country one month ago.

Roughly 65,000 people have so far fled the city in private vehicles or on foot, Governor Pavlo Kyrylenko said on national television Friday. Mariupol remains under Ukraine’s control, he added.

Mariupol is widely seen as a strategic asset for the Russian invaders to create a bridge between Crimea, annexed by Moscow in 2014, and two separatist enclaves in eastern Ukraine.

Russia calls the war, which is the biggest attack on a European state since the Second World War, a “special military operation” to disarm Ukraine and protect it from “Nazis.”

The West says, though, that that reason is a false pretext for an unprovoked war of aggression to subdue a country Putin describes as illegitimate.

Peace talks have been ongoing throughout the war, but have yet to produce any breakthroughs.

The two warring sides will sit down in Turkey on Tuesday for an in-person meeting in hopes to bring an end to the war that has forced more than four million people to flee the country.

— with files from Reuters.